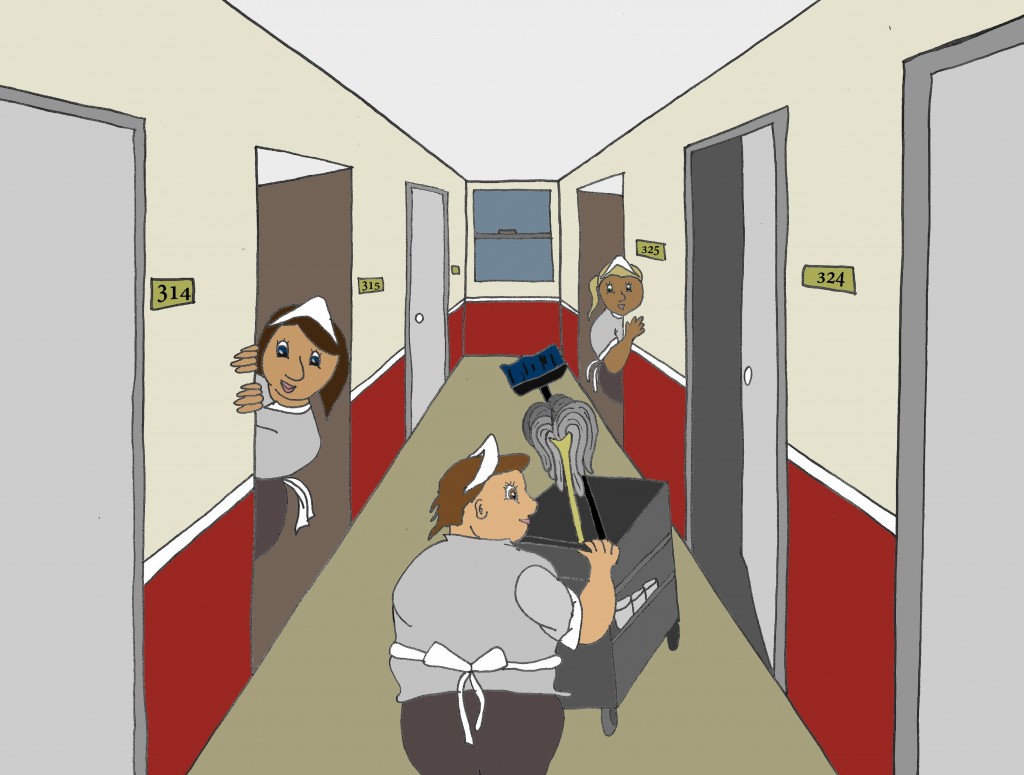 What makes a successful hotel employee? According to a recent study, having more to love may be the key to great work ethic and happier customers.

A study conducted by researchers at Mason and Pennsylvania State University recently found that female hotel employees who weigh more than average are perceived to be kinder and more competent than their less heavy coworkers.

Isaac Sabat, a fourth year doctoral student at Mason, helped contribute to the study. He initially got involved in order to help his friends with the study, but they later asked him to take on a more involved role.

The study of 169 participants across the United States was conducted online through Amazon’s Mechanical Turk in the summer of 2014. It used photos of various front desk employees with written scenarios about how the employee handled a typical situation of a guest checking into a hotel. Participants were shown one of four photos with the hypothetical worker and situation.

After viewing the photos, participants answered questions about the employee and the overall experience of the hotel. Photos used in the study included both male and female employees with varying weights.

“The pictures varied in terms of gender, male or female, as well as weight, heavy or average weight, which we manipulated using photo editing software,” said Sabat.

While the study showed that the weight of male employees had no impact on participants’ perceptions, that was not the case for female employees. According to the study, participants favor heavier female hotel workers.

“Interestingly, heavier women were perceived to be the highest in warmth, which led to increased perceptions of service satisfaction,” Sabat said. “We were surprised by these results, but we believe they make sense after reading other literature on this topic.”

In an interview with Phys.org, Larry Martinez, assistant professor of hospitality management at Penn State who was involved with the study, said that the study’s findings “highlights the greater emphasis on weight and appearance for women compared to men in general.”

According to Sabat, most studies on this topic find that people prefer less heavy employees, especially when rating men against women. However, he found that this particular study showed unexpected results due to the customer service aspect.

“The current study was unique in that we were looking at a customer service context, in which perceptions of warmth matter more than perceptions of competence,” Sabat said. “In this unique context, we find that heavier women actually receive a boost in ratings. We are planning on conducting follow-up studies that manipulate the job context (customer service jobs vs. technical jobs) to examine these interactive effects in more detail.”

The idea of warmth versus competence is drawn from the Stereotype Content model, which poses that all social groups fit into one of four categories based on two variables: warmth and confidence.

For instance, highly educated people of Asian or Jewish descent are seen as highly competent but not warm, according to a 2002 article in the “Journal of Personality and Social Psychology.” But the results from Mason and Penn State’s study show that some stereotypes can be mixed.

Despite its surprising results, Sabat finds that this study holds great importance because of the effects it can have on employers and employees.

“I think this study is important because it highlights a discrepancy between science and practice,” Sabat said. “Managers sometimes try to hire customer service staff who are ‘visually appealing’ and assume that placing overweight women in these positions will lead to reduced customer service perceptions. The current study finds that the opposite is true. Thus, we urge managers not to base their hiring decisions on these uncontrollable, superficial demographic characteristics.”

Sabah said that having the chance to work on this particular study was a great experience for him because he is highly interested in organizational psychology. He previously worked with Martinez and Nicholas Smith, a doctoral student at Penn State, on workplace diversity and discrimination research projects, but this particular project differed from his previous experiences.

“This experience was quite different from others because we were submitting our study to a hospitality journal,” Sabat said. “Thus, there were different protocols and different concerns brought up by the reviewers that we were not used to addressing.”

While the study revealed unexpected results, Sabat believes it still holds great significance to his field of study and has the potential change lives. “I am most passionate about examining strategies to improve workplace diversity and inclusion,” he said. “Research on this topic has the potential to improve the lives of actual, stigmatized employees. Thus, I feel as though I can contribute to society in a positive way through this work, which gives me a great sense of inspiration and purpose.”

Sabat will have the chance to continue following his area of interest after he graduates this year. He recently accepted a job that will allow him to work in this field and bring awareness to the issues he cares about.

“I have just accepted a faculty position in industrial/organizational psychology and diversity sciences at Texas A&M University,” Sabat said. “I plan on continuing to conduct research studies that highlight workplace diversity issues.”

Owning Millennials: Do we have the power to shape the future?

Poll results: How do you feel about Student Government leadership?