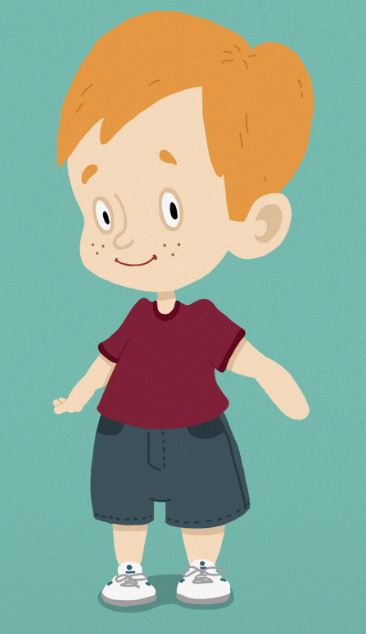 Trace Wilson remembers hiding his arm in his pocket when he was younger so that people would not notice he was born with only one hand.

Now a senior at Mason, Wilson’s perspective on his disability has changed drastically — and he’s using his experience to help others by writing a children’s book on self-love and growing up different.

“The book is about a little boy with one hand who goes on an adventure to discover why he’s different,” Wilson said, noting that he wrote the book because he knows “[being different] is something that a lot of people struggle with.”

Having gone through most of his life feeling different himself, Wilson understands the struggle.

“When I was little, I was always very worried about what people would think of me because I have one hand,” he said. “So it took me quite a few years to overcome that, and now I’d like to give back and help little kids overcome it themselves.”

Wison’s mother, Nancy Wilson, said that she knew he was always aware that he was different.

“Trace was a sensitive child,” she said. “While he had friends, he always held back a little with strangers because they were always inquisitive regarding his having only one hand. He was especially uncomfortable around small children who were always asking why.”

Despite the challenges of being different and constantly needing to explain himself to others, Wilson said that he has been able to do most things he has set his mind to, such as tying his shoes, playing video games and driving.

His mother agreed that his “one-handedness” has never stopped him, remembering how he once saw her knitting and, within minutes, figured out a way to do it himself.

But one of Wilson’s most recent accomplishments is his new book.

Wilson explained he began writing the book, which he described as a “spur of the moment” endeavor, when he was bored on a road trip two years ago simply by typing it up on the notes application on his phone.

It was not until this past May that he decided to make an online, crowdfunding Kickstarter campaign to sponsor the book. After sharing the campaign on social media, Wilson was able to raise about $5,800 and was even contacted by local publishing company, Mascot Books.

Mascot Books’ CEO and publisher, Naren Aryal, said that his company was inspired by Wilson’s campaign, which is what led them to reach out to him.

“His story is one that can help a lot of children and also families, particularly those who have children with disabilities,” Aryal said. “It’s something that young readers can relate to and assure them that they aren’t alone. So he’s really a role model I think.”

After signing with Mascot Books, Wilson describes the less-than-a-year process of getting his book published as a “whirlwind.”

“It’s crazy,” he said. “At first, with the Kickstarter, it was still just an idea and I had no idea how it was going to turn out, so … it was kind of surreal seeing everything come to life when before it was kind of just all in my head.”

Despite this being Wilson’s first book, Aryal said going through the publishing process with him was smooth.

“He was great to work with,” Aryal said. “He had a clear vision of what he wanted to accomplish, so it was a good fit all the way around.”

The book, titled “Uniquely Me,” has strong connections to Wilson, but it is not autobiographical. The main character shares neither Wilson’s name nor his appearance in order to make him more relatable.

“The book is about a little boy with one hand, but I didn’t want the book itself to be geared towards only kids with one hand or only kids with this specific disability,” he said. “I want it to be something that any little kid that worries about being different or worries about what they look like or their personality or anything, that they can read the book and kind of understand that they can overcome that fear.”

Overcoming this fear of being different is exactly what Wilson did himself – Although it took almost 18 years to do it.

“It held me back from a lot of things, [because] I would think things like, ‘Oh, well I shouldn’t try to do that or talk to that person, because what will people think of me?’” he said. “Then I kind of realized … that if act like that weird kid that stands in the corner and doesn’t have any friends, then that’s how I’m going to be treated. … But if I make an effort to be outgoing … and act like it doesn’t affect me whatsoever, then that’s how people will see me.”

Over time, this new mindset is what helped Wilson to feel comfortable with himself, and that’s what he wants to share with others going through the same experience.

“If I can help one kid that feels the way that I did for the first decade or two decades of my life, and help them overcome that obstacle early, then my goal is met,” he said.

The official release date for “Uniquely Me” is set for January 5, but Wilson is already thinking about his next book, which he plans to gear toward parents of children with disabilities.