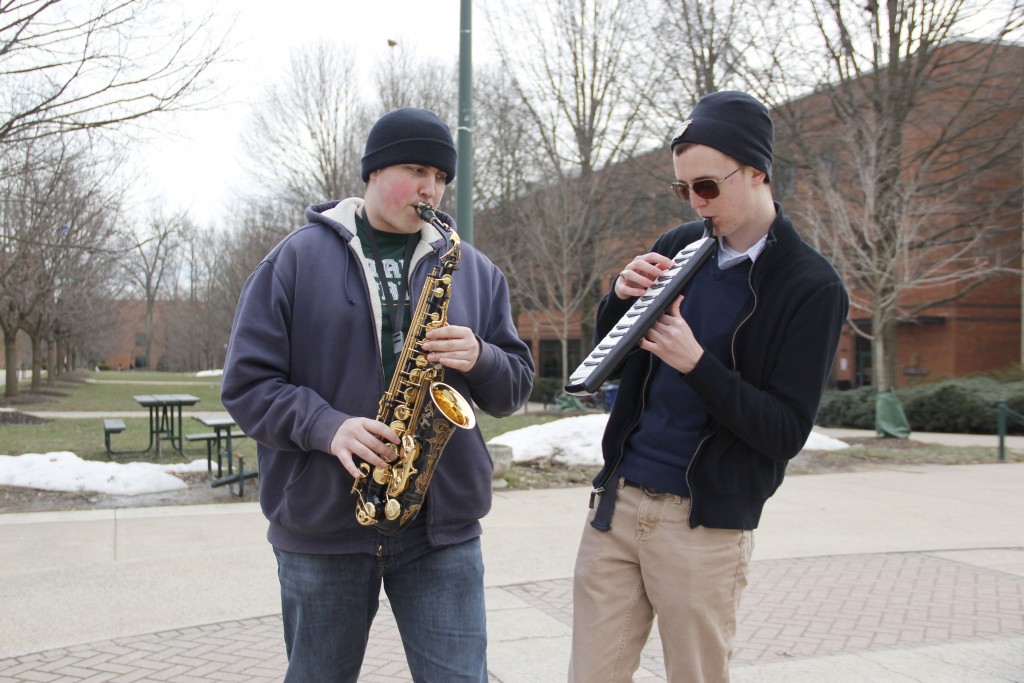 As Mason students are making their way through North Plaza on Tuesdays, they might often notice the angry preachers yelling arguably hateful words.  These preachers sometimes attract large crowds of curious, and often aggravated, students because of their passionate — and, for some, laughable — preaching.

Lately, however, there has been a more positive reason for the crowds in North Plaza. Some Mason students have decided to rebel against the negativity and do something that will make people smile instead of stare with confusion.  There have been groups standing next to these preachers with “free hugs” signs and even student musicians spreading the love with some tunes.

Freshman Matt Cesnik and junior Jimi Hendricks have been playing live music during these preachers’ rants to spread positivity on campus.

Cesnik and Hendricks both stumbled upon the preachers by chance and decided music was the best way to fight back.

“Last semester, I noticed that these guys were out here every Tuesday,” Cesnik said. He decided he wanted to spread positive vibes to counter the preachers’ animosity. “I was kind of just playing music, trying to drown out the preachers because they are getting really annoying.”  Last week he ended up staying in North Plaza for two and a half hours.

WGMU’s Matt Dodson and Nick Ortiz featured Cesnik on their radio show, “The Nice Guys,” where they interviewed him about his instrument of choice, the melodica, which Cesnik describes as “a drunken love child of a piano and a harmonica.”

Hendricks first stopped by the preachers to see what they were talking about. The preachers stand with signs saying things like, ‘You Deserve Hell’ and shout out random insults to students like “You are a sinner.”

“I ran into my roommate when they were preaching and we started laughing our butts off. He knew I played saxophone and encouraged me to play in front of them. However, you could say my reasoning for doing it was to do it for the hell of it,” Hendricks said, tongue-in-cheek.

Hendricks also mentioned one preacher’s insensitivity toward people of other faiths, especially Islam. “[H]e made jokes to Muslim students about them flying into buildings, stating that all Muslims are terrorists.”

Mason’s campus is a public space that is open to all kinds of free speech. “It’s a public space, and if you want to exercise freedom of speech you’re allowed to do so,” Cesnik said. He explained that no one is going to harm the preachers for doing what they have the right to do. “So no one is going to lay a hand on these guys just for what they are saying because that would be assault. But we can have that speech thrown back at them.”

Though one might assume that a person playing the saxophone would catch anyone off-guard, these preachers do not appear to be phased by the lively tunes.

“I’ll be honest, it does not affect them at all,” Hendricks said. “There [have] been dozens, possibly even hundreds before me that have performed and try to drown them out. From what I have heard, they’ve been here for years, they are doing it now, this has not stopped them. Even though we are trying to drown out the noise, in their minds, we are the ones who are drowning.”

Hendricks said he tries to consider these preachers’ point of view. “[I]f you saw a little kid drowning, would you not try to jump in and save them, even if you had some annoying guy playing saxophone in front of your face? That’s the equivalent in their eyes … we are the little kid who is drowning, they will try to ‘save us from hell’ us no matter what.”

Students have told Hendricks that these preachers should be forced off campus grounds. “I disagree,” Hendricks said. “Even though their opinions are unpopular and negative, they are still under the rights of the First Amendment. The students here just have to suck it up, move on, and make something positive out of a negative situation.”

Hendricks and Cesnik both decided to play their instruments to brighten by-passers’ moods. “I want other people to feel good and laugh,” Hendricks said. “I’m glad knowing I am providing a comic relief. I would like people to see that I am the equivalent of Donkey in Shrek while the preachers are Lord Farquad.”

Cesnik feels that if plays his music louder than the preachers talk, he will be spreading the love on campus. “Music is a positive, I want to bring positive vibes around,” Cesnik said.

“We can admit that 90 percent of us do not take the preachers seriously and we see them as jokes,” Hendricks said. “But all jokes aside, I feel bad for the other 10 percent.”

Hendricks feels especially sorry for by-standers who are Christian. “[Their] … hearts seemed broken since you have these ‘crazy’ preachers who make the religion look bad. There were Christians there trying to encourage other people to come to their Bible studies, trying to spread the word through love and acceptance instead of trying to scare people into the religion through hate and fear.”

Cesnik says he gets really into his music when he performs next to the preachers. “I went through two rounds of them [the preachers],” Cesnik said. “They eventually switched off. Both of them tried to talk to me at first, I guess to get me to stop playing, so I’d be talking to them. So I kind of just locked eye contact with them and kept playing in their face.”

Both Hendricks and Cesnik have had a passion for music starting at a young age and are currently involved with Mason’s pep band, Green Machine, which was ranked the best band in the nation by NCAA.com. Hendricks started playing the saxophone when he was 10 years old.

“I feel ecstatic whenever I have the excuse to play the saxophone,” Hendricks said. “I was playing the sax for my own enjoyment. Honestly, watching the preachers become frustrated like that was the most enjoyment I got out of life in ever since I have started here at George Mason.”

Cesnik plays the melodica to get away from real world problems. “If things ever get overwhelming, and I need to escape, there are songs I can play and songs I listen to that have a very calming effect. It’s unbelievably helpful, and nothing has ever had the same type of effect on my life that music has.”

Cesnik likes to play tunes such as wrestler John Cena’s entrance theme or the Tetris theme song. “The Tetris theme, I can play for hours because Tetris can go on for hours,” he said. Cesnik said he is also a pianist, so a lot of what he plays on his melodica also works on the piano as well.

When deciding what instrument he should play to interrupt the preachers, Cesnik had to think on it, since he plays a number of instruments.

“I’ve played piano for five years and trumpet for eight. I actually bought my melodica … this past fall specifically to play around the preachers, because I felt like [the] trumpet would be too loud for North Plaza, given that there are classes going on in the surrounding buildings.”

Cesnik explained that he does not intend to interrupt students’ ability to hear their instructors. “It’s just loud enough to be obnoxious upfront, but not loud enough, I don’t think, to cover up classes,” he said. “I started playing around them a little bit at the end of last semester, and then I did decide that every time they are out there this semester, I want to be out there.”

Students like Cesnik and Hendricks seem to be starting a musical revolution. Cesnik explained that a student musician walked up to him once while he was playing and asked if he could accompany him the following week. Cesnik said he was happy to oblige. “I said, ‘Hey I’m not one to dictate what goes on here, so if you want to come play, then absolutely. Be my guest!’”