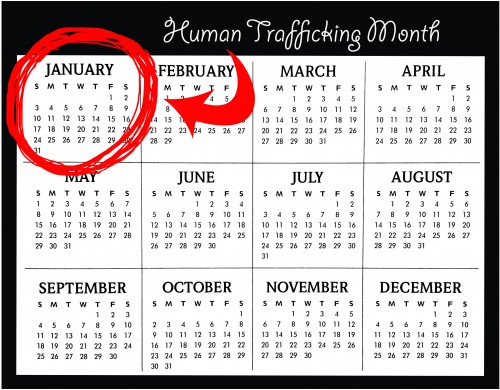 On Jan. 12, the City of Fairfax decreed that January would be Human Trafficking Awareness Month.

Negar Ehsani, chair of the City of Fairfax Commission for Women, said that the Commission supported Fairfax’s decision and that the proclamation was an official way to raise community awareness about human trafficking.

“We definitely want to be raising public awareness, and a proclamation is a very formal way of doing so about human trafficking. We did a proclamation about Domestic Violence Awareness month, so we are trying to kind of make another avenue to spread the word about these issues that are important to women and girls in the City [of Fairfax],” Ehsani said.

The City of Fairfax Commission for Women aims to identify and acknowledge the needs of women in the City of Fairfax. According to their website, “this includes advising City officials on legislative and policy matters relating to women and advocating for programs to appropriately address their needs.”

In addition to raising awareness about human trafficking, the commission also publicly addresses issues such as domestic violence, women’s health issues and hate crimes, among others.

In his press release, President Obama said, “I call upon businesses, national and community organizations, families, and all Americans to recognize the vital role we can play in ending all forms of slavery and to observe this month with appropriate programs and activities.”

Detective Bill Woolf is the head of the Fairfax County Human Trafficking Task Force (HTTF). Though HTTF has existed since 2004, it was mainly dormant until it received a $1 million grant from the Justice Department in 2013.

According to the task force’s website, “Virginia is 1 of 10 states that make the most calls to the National Human Trafficking Hotline. A large percentage of these calls are made from Northern Virginia.”

The task force reported that between October 2013 and January 2015, 290 victims were identified, of whom 243 were adults and 47 were minors. 202 leads, which may have been instances of human trafficking, were also reported during that time, as well as a total of 17 cases of confirmed human trafficking, two of which accounted for about 160 victims.

The task force attributed the high number of human trafficking in the area to the high prevalence of gang activity, especially from MS-13 and the Underground Gangster Crips, two gangs that have been prosecuted for prostituting underage victims in Northern Virginia. NOVA HTTF said that pimps are currently using Facebook and other social media platforms as both recruiting tools and  “virtual brothels.”

In 2013, Shared Hope International (SHI), a nonprofit that aims “to prevent the conditions that foster sex trafficking, restore victims of sex slavery, and bring justice to vulnerable women and children,” gave Virginia a grade of “D” for its Protected Innocence Challenge. SHI determines grades by reviewing each state’s human trafficking laws and their effectiveness.

The Protected Innocence Challenge is a study SHI conducts that evaluates each state’s laws and how they respond to human trafficking. Each law is evaluated based on how it protects the victim and prosecutes traffickers as well as traffic facilitators and anyone taking part on the demand side, that is, someone who is paying for sex.

In the original report from 2013, Shared Hope International explained its decision, noting, “Virginia does not have a human trafficking or sex trafficking law. The abduction law is used to prosecute cases of sex trafficking; however, minors are not considered abduction victims unless they are subject to force, intimidation or deception. Demand may be deterred through felony penalties and vehicle forfeiture for violations of commercial exploitation of a minor.”

Woolf said he had hoped the grade Virginia received for 2015 would be higher than the “D” previously received because the state enacted its first law focused solely on combating sex trafficking on Apr. 1, 2015.

However, SHI’s grade for Virginia for 2015 was still a “D.” The report explained the grade, stating, “Virginia criminalizes child sex trafficking without requiring proof of force, fraud or coercion, but the sex trafficking law does not reach buyers of sex with minors. While defendants convicted of sex trafficking face sex offender registration and asset forfeiture, minor victims still face delinquency and detention for prostitution charges.”

While Virginia passed its human trafficking law last year, the state does not have any “Safe Harbor” laws, which are designed to protect minors by stating that anyone under the age of 18 cannot be charged with prostitution or solicitation. While many see Safe Harbor laws as an important way of protecting the victims, Woolf said that the laws can sometimes make it more difficult to find the traffickers, because the victims will often leave police custody and return to their traffickers, continuing the cycle. According to Woolf, the time that the victims spend away from their traffickers can encourage the victims to realize that they are being trafficked and help law enforcement.

Woolf explained that one way people become victims of sex trafficking is through emotional manipulation.

“When we talk and we meet with a lot of these victims, a lot of them are very compassionate individuals, and the traffickers take advantage of that,” Woolf said.

Woolf’s partner with the FBI, Special Agent Ted Delacourt, agreed and added that another factor traffickers often use is distance: by taking victims away from everything they know and taking away any sort of resource, such as cash or a cell phone, the traffickers create a feeling of helplessness in the victim, according to Delacourt. Delacourt mentioned a case in which two juvenile girls found in a hotel in Herndon, Va., were found to originally be from California. Delacourt said distance is a common tactic traffickers use to disorient victims and make it nearly impossible for them to escape.

Both Woolf and Delacourt agreed that one of the biggest issues law enforcement personnel face with human trafficking is lack of resources. Woolf pointed out that he is the only specialist in the Northern Virginia area who focuses solely on human trafficking. He estimates that about six detectives are needed to effectively combat this issue.

However, while the NOVA HTTF has been successful in uncovering trafficking victims, their main priority is to help the victims.

While Woolf believes that changes are coming, he said they are going to be slow. He continued that lawmakers will only act if a large number of the population calls for change.

“The question really is, is the public going to continue to push the issue?” Woolf said.

Correction: This article originally reversed the statistics of adults and minors identified as human trafficking victims between October 2013 and January 2015. The correct numbers are 243 adult victims and 47 minor victims. The current article reflects this change.

Rise and shine with Women of Color in STEM