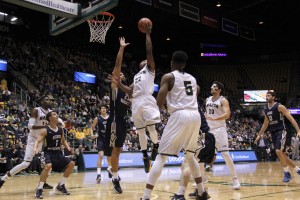 Head men’s basketball coach Dave Paulsen started a new tradition this year by inviting faculty and staff to join him on the sidelines of home games as part of the sideline coaching program. This new program is meant to bridge the gap between players and faculty.

The program has seen great results thus far for the Patriots. Over 80 people responded immediately to an email sent to faculty and staff interested in an opportunity to sit on the sidelines with the team.

With so much interest for only a few home games, Paulsen had to figure out who would get to participate in the limited number of games. In the end, the team put all the names in a lottery to pick who would be part of the program this season.

Faculty and staff members who were chosen receive the entire basketball experience. They attend a practice the day before the game, watch pre-game prep, sit on the bench during the game, experience the huddles and sit in on a tape viewing.

The point of the program is to break down the barriers between athletics and academics. It is also a great way for Paulsen and his new assistant coaches to meet more people in the Mason community.

Senior forward Julian Royal had his finance professor attend a game and a practice. Royal said he was excited for the program since it opened the doors for faculty to see the other side of being an athlete. Most teachers just see players leaving class early for a game, or tired after a practice. They don’t see all the work that goes into being an athlete.

“I was excited because it allowed the professors to see a different perspective. … They actually see what we go through,” Royal said.

Beyond bridging the gap between faculty and athletes, the program has also helped the players make connections for their careers after school.

Tim Groseclose is an economics professor at Mason who sat in as a sideline coach during the game against the University of Northern Iowa. He looks back on his time with the team as an eye-opening experience.

He was able to get to know Michael Rudy well at practice and on the bench during the game. After his time with the team, Groseclose connected Rudy with one of his colleagues to help the player further his networking opportunities. The professor learned that Rudy was interested in attending grad school for chemical engineering, a path similar to the one Groseclose’s friend had taken.

“I had coffee once with Michael to talk about [chemical engineering] and sent an email introduction [to] my friend [about] Michael. I said to my friend Joe, ‘Can you give a sentence or two of advice for Michael?’ And he said, ‘Sure, give me a call back,’” Groseclose said.

Groseclose is a prime example of how the gap between academics and athletics can be connected. He recalled speaking with a player in the locker room after a game about a test the player had to study for. It was almost 10 p.m. at that point, and the player was mentally preparing to go home and study.

“I was thinking [about] how hard that must be because you’re out on the floor and there’s [too] much excitement in the arena to … calm down and study. I remember feeling bad for him, actually. I was thinking, I’m so glad I don’t have to [study]. There was no way I could switch gears and do that,” Groseclose said.

The program has even begun to help with recruiting, too. Now Paulsen can recommend different professors or staff members for potential students to speak with if they are interested in attending Mason.

“As we’re recruiting, we can get a real understanding of the place. It’s been a real positive,” Paulsen said.

While this program has seen success at Mason, it began at Bucknell, Coach Paulsen’s old stomping grounds. The program was already in place when Paulsen began coaching at Bucknell, but he was not very thrilled with the idea at first.

“I was like, ‘I don’t know if I want these faculty members in our practice, in our huddle,’” Paulsen said.

After going through the program, he realized how great it could be and worked to bring it with him to Mason.

“Once I went through it,” Paulsen said, “it was an awesome program.”

The program has seen great benefits for the Patriots thus far and works to drive home one of Paulsen’s biggest concerns for the team: academics. He takes missed classes very seriously, and expects everyone on his team to put forth their maximum effort — not just on the court, but also in the classroom.

“My thing is just [to] do as well as you can. If that’s an A, then don’t settle for a B plus. Just trying to let our guys know we want everyone to graduate … and do as well as they can,” Paulsen said.