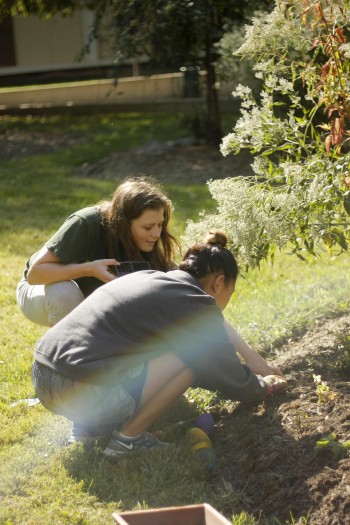 A Mason LIFE (Learning Into Future Environments) professor is teaming up with Mason’s grounds shop to beautify the campus.

Professor Sophie Johnson is teaching students the art of horticulture by reviving a plot of land between Finley Building and Thompson Hall. Her class is able to use the plot because of an agreement between Mason LIFE and the grounds shop.

According to Suri Raut, academic coordinator for Mason LIFE, the partnership has been active for three semesters. Several years ago, a similar partnership was attempted, but it eventually petered out. However, last semester Raut and Johnson signed a memorandum of understanding with Archie Nesbitt, landscape and grounds supervisor, due to an increase of student interest for the class.

“We’re going to maintain it for, you know, as long as I’m here and beyond,” Raut said.

The memorandum of understanding contains the Mason LIFE program’s caretaking responsibilities for the plot as well as a description of the situations in which the grounds shop will step in, such as pesticide application, Raut said.

“Everything needs to be approved through Mr. Nesbitt before we can actually plant anything,” Raut said. “We’re definitely going to be working with them very, very closely.”

Johnson’s course is called LIFE A100 Horticulture. The class discusses the life cycle of plants, their maintenance, how to grasp their nutritional value and how to create organic soil, among other topics. Reviving the land outside Thompson Hall is Johnson’s primary method of teaching these lessons to her students.

She said there are many plans for the plot, including “rebuilding the bird houses, planting annual vegetables, trench composting and adding as much organic material to the soil as we can.”

Raut said the students enjoy going outside and working with their hands during every class.

“Everybody is getting their hands dirty and getting down on their hands and knees,” Raut said.

Johnson said her students’ horticulture experience varies. While some have spent time working on farms, others are novices in planting and growing vegetables and other plants.

Beyond teaching students about gardening, Johnson also wants the class to allow students with disabilities to expand their horizons and assist them in finding jobs. Students can show off their class blog called “gmulife,” which documents their activities and showcases what they have learned. Johnson said landscape services and design is an opportune career field for students with disabilities.

“[They can] put their foot in the door, and so something I’m hoping for is — with this blog developing — it actually gives them a visual résumé for things that they have done,” Johnson said.

One post from November 2015 highlights the work of a student named Iya. Iya helped Johnson prepare the garden for spring by pulling weeds and removing dead plant material. The blog also spoke about how she taught her classmates a technique called sheet-mulching, which adjusts the soil’s nutrient composition in order to assist the growth of vegetables.

Raut said in the spring, the class will breed kale, lettuce, peas, broccoli and tomatoes. Maintaining the plot of land and designing it to attract butterflies and bees are also on the agenda.

“Hopefully the soil will be more fertile after the feeding we did to it last semester with the cardboard and leaves and hay,” Raut said. 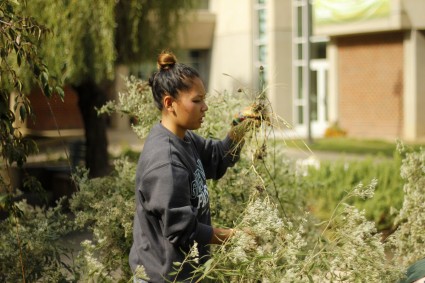 He said the vegetables grown in the garden are not for mass production and students may take them home.

Raut said students, faculty and staff should be excited for the garden’s developments.

“The Mason community will look forward to having a nice, manicured plot of land with a bunch of butterflies and bees buzzing around,” Raut said.

Johnson and her class are even planning to reconstruct two destroyed bird houses that have become worn out over the years, a project students are enthusiastic to begin.

Mason LIFE students develop a strong connection to the land they work on and the plants that grow out of it. Johnson said that by working on the garden, her students are able to learn where their food comes from, develop a better relationship with food and apply these horticulture skills in their future lives. By maintaining a garden on campus, students will gain school pride and thus become “better student[s] for Mason,” she said.

For Johnson and Raut, the land stewardship that students gain from working on the garden is one of the most important things about the course. Johnson said that in this way, her Mason LIFE students can contribute to the wider university community.

“Maybe [after] this lesson that they learn and their work on this land … the land stewardship [will] bleed over to the larger community,” Johnson said. “Mason LIFE students probably feel more [passionate about] land stewardship than others, but their work might make more members of the community care more about the land.”

Johnson’s horticulture background contributed to her understanding of land stewardship and gave her a sense of responsibility toward Mason’s grounds. Before becoming a Mason LIFE faculty member, Johnson graduated from Mason’s permaculture certification course in 2012. She then managed the Potomac Heights Vegetable Garden for a few years. Johnson also has three years’ experience in organic farming, including a summer spent working a ten acre vegetable garden at Idyllwood Farms in Floyd, Va.

“I saw [plants] from seed, to transplant, to harvest, to market — that whole process,” Johnson said.

This spring, Johnson’s class expects to harvest plants from the garden for the first time, including various vegetables and herbs. Mason LIFE plans to hold a picnic-like event to celebrate the harvest and offer the Mason community a chance to try the produce.

Raut said he wants the Mason LIFE garden to unify the community by helping everyone to “just to be one” with the campus.

View all posts by Tiffany Lin →