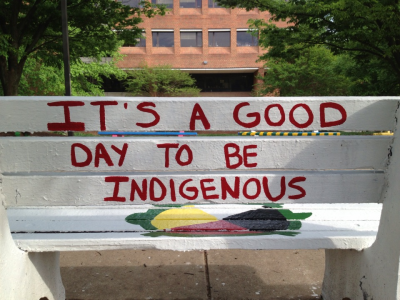 (Photo courtesy of the Native American and Indigenous Alliance)

Resolution 13, called “A Resolution to Urge the University to Reconstitute Columbus Day as Indigenous Peoples’ Day,” passed by a 25-3-1 vote Thursday evening.

It calls for Mason “to recognize the second Monday in October as Indigenous Peoples’ Day instead of Columbus Day on any calendar published by the university every year, from this day forward.”

“Progress for indigenous communities has been long overdue, as they make up a huge part of Virginian culture in ways we are not always aware of, and inspire the names of our rivers, cities, towns, and streets we drive on,” Payne said via email. “…I hope that this resolution will be one way that we become more aware of our Native American and indigenous peers, but at the very least it will provide us with another opportunity to celebrate them.”

Senior Kalia Harris, president of the Native American and Indigenous Alliance, has been a strong advocate for this resolution.

“I don’t think any universities should be celebrating [Christopher Columbus], but especially us at Mason because we pride ourselves on being a diverse and inclusive environment for everyone,” Harris said. “So by celebrating a holiday … [in honor of] a person who has done such egregious things is not the right thing to do. And the fact that we have any students that are saying this is something that affects their well-being and makes it feel that their university isn’t a safe and inclusive space to learn is enough for us to change the name to a holiday that’s celebrating and including everyone.”

Senator Caleb Kitchen, who voted against the resolution along with Ryan Cook and Ben Ellison, said not observing Columbus Day would have a negative effect on diversity within the Mason community.

“Those of us in the senate who voted against it, we all agreed that Indigenous Peoples’ Day should be celebrated, that there should be a day to recognize it,” Kitchen said. “But at the same time, the spirit of Columbus is part of the American spirit and we think that should be recognized and celebrated along with Indigenous People’s Day.”

He said Columbus’s influence on other explorers to take risks and follow dreams has become part of the American culture.

The resolution states, “Christopher Columbus is symbolic of an era of egregious crimes against humanity, and the celebration thereof harms the greater Mason community by perpetuating a narrative which legitimizes systems of inequality.”

Harris said changing the narrative is one of the most important things the resolution could accomplish.

“I think as an institution of higher learning [we should] have that dialogue on campus [and] see if we can start dismantling that dominant narrative about Native Americans and get people more involved in the culture rather than perpetuating stereotypes,” Harris said.

Sophomore and history major Hunter Derensis attended the senate meeting in order to voice his opposition to the resolution. He said most people agree that Columbus was not a moral man but did not think that was a good reason to eliminate the holiday because Columbus should still be remembered for his impact on history.

“Morality can not be connected to greatness,” Derensis said. “I would say Columbus was an evil man … but to apply morality to him but not Native Americans, I find completely hypocritical.”

Resolution 13 was introduced and tabled at the Student Senate meeting on Dec. 10, 2015. At that meeting, Harris said she presented a petition in favor of the legislation with about 450 signatures. Also, she helped spread a press release before the meeting, which included formal support from 15 other student organizations, including the Black Student Alliance, GMU Student Power and Mason DREAMers. Now that the resolution has passed Student Senate, it will come to a vote in Faculty Senate before it is presented to university administration for approval.

Harris said she hopes Faculty Senate will be “on the right side of justice” and that administration will want Mason to become the first public Virginia university to recognize Indigenous Peoples’ Day in place of Columbus Day.

“I really just hope that Mason would want to set a precedent for our entire commonwealth, and it’d be great to be the first university in Virginia to use the name of this holiday,” Harris said. “That’s just an awesome opportunity to have.”

However, Kitchen said that might not be legally possible and one of the reasons he voted against the legislation. He contacted a policy analyst from the State Council of Higher Education for Virginia over winter break, as well as Steven Landes (R), the chairman of the Education Committee in the General Assembly House of Delegates. Both contacts thought Mason, legally, must observe all state holidays. Kitchen said they suggested asking the Board of Visitors to recognize a separate holiday for indigenous populations.

“If we had defeated Resolution 13, I would have been prepared to introduce a resolution that followed that policy advice,” Kitchen said.

Harris does not think those legal concerns are a valid cause for halting the movement.

“It’s not as difficult as they tried to make it seem,” Harris said. “Really, we just need to show the administration that this is what people want, and when we do that things fall into place and things change.”