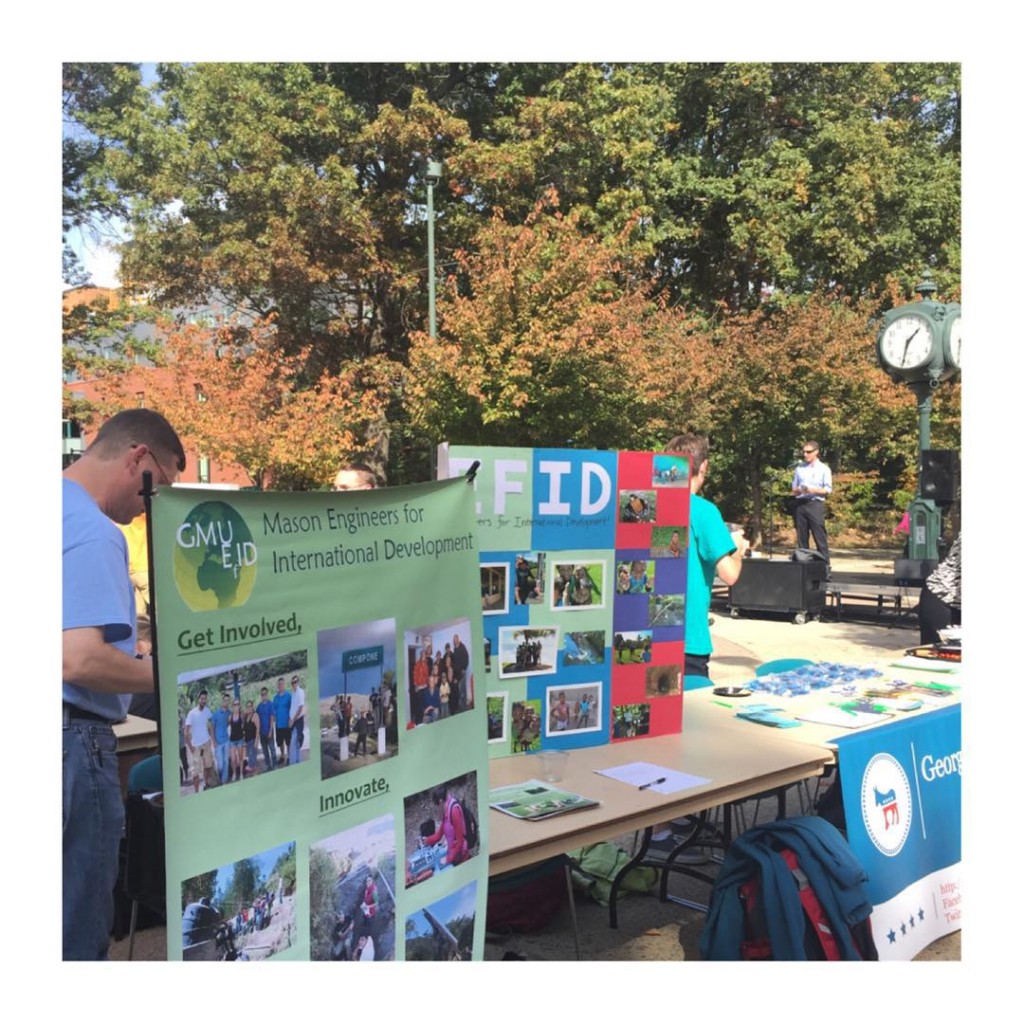 On Thursday, October 22, numerous clubs from around campus came to North Plaza to showcase their plans for environmental sustainability at the Mason Environmental Festival.

Danielle Agress, a senior government and international politics major in charge of public relations for the Secular Student Alliance (SSA), was one of the coordinators for the event. She said the aim of the event was to unite students who support environmentalism.

“The goal of the Mason Environmental Festival was to bring together different student organizations on campus with environmental goals and initiatives to find common ground and promote sustainability,” Agress said.

The festival did just that by including many organizations such as Mason’s Baha’i Club, the George Mason Democrats, the Israel Student Association (ISA), the Secular Student Association (SSA), Mason CRU, the Roosevelt Institute, Engineers for International Development (EfID) and the David Project.

“[The festival] was meant to raise awareness about many of the environmental issues that face us today and how we as college students can take action,” said Alexander Krupp, a junior  environmental science major and the president of the SSA. “We did this by offering live music by students and free vegetarian food, and allowed multiple student groups to showcase their environmental initiatives and how to get involved.”

Indeed, many of the groups at the event did offer ways for students to get involved. Mason CRU was there representing Love Week, which takes place this year from November 9 to November 13 to help raise funds to build a school in Cambodia. The Roosevelt Institute, a student think tank on campus, spoke about promoting environmental sustainability on campus by recycling and signing the petition to get simplified trash bins on campus to make recycling easier.

Other organizations, such as the Isreal Student Association (ISA) and the David Project, shared about their sustainability efforts abroad.  “ISA’s table focused on drip irrigation and water desalination in Israel,” Agress said.  “These are important environmental topics in Israel because it is a desert country with little access to fresh water.”

Drip irrigation is a type of irrigation that reduces water use and waste more effectively than the flooding method of irrigation does, while water desalination removes salt from water to make it safe for use.  “The David Project’s table covered a variety of environmental issues in Israel, including recent environmental technology innovations, issues concerning the Jordan River, and the Arava Institute, an institute which aims to bring together people of all faiths and races to promote sustainability and innovation in Israel,” Agress explained.

Several organizations shared about how other initiatives they support trace back to sustainability .  Mason’s Baha’i club showed up to raise awareness about the Baha’i faith and to start a conversation about how the it impacts the world through international cooperation. The George Mason Democrats discussed how people can influence politics to create global change.

The SSA discussed secularism and the environment.  “We did have a table showcasing the SSA and the ethics of the secular community (specifically humanism and its relation to the environmental movement),” said Krupp.  “The SSA’s goal has always been to raise up the non-religious student community of George Mason as well as promote respect and understanding among peoples of all sorts and backgrounds . . . I think we represented the secular students of George Mason quite well.”

Krupp believes that the event was a success.  “We were able to inform a great number of students about water conservation and the severity of climate change, and many students were able to connect with the groups we had participate and how to get involved with them and their initiatives,” said Krupp.

Others shared his sentiments, believing the festival succeeded in showcasing the array of environmental efforts happening at Mason and in promoting student unity.

“I believe the Mason Environmental Festival was successful in raising awareness of different environmental initiatives both on campus and around the world,” said Agress. “It was also successful in bringing together a unique group of student organizations (political, cultural, and faith-based) in order to promote a single cause.”

The event encouraged Mason to stay green (and gold).

“I had told my team going in that if we can get at least 10 students to recycle or consider ways to conserve water in their own lives, then the event will be a great success,” said says Krupp.  “And I think the positivity and enthusiasm of the great people involved towards our cause of promoting appreciation of our mother Earth made the event an absolute success in my mind, and made me ever more proud to be a Mason Patriot.”