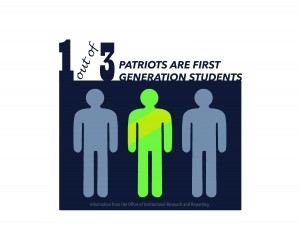 In fall of 2014, 33 percent of Mason undergraduates were first generation, according to the Office of Institutional Research and Reporting. (Megan Zendek/Fourth Estate)

For every three students that attend Mason, one of them is a first generation student.

Mason has seen a spike in attendance of first generation students due to, in part, location and cost, according to a blog post by former provost Peter Stearns.

“Location in a region of immigration, diversity and population growth provided an obvious spur. So did relatively low costs and reasonably high quality. For some students, Mason’s close connections with Northern Virginia Community College were (and are) an important factor as well,” the post said.

With such a large percentage of first generation students, organizations like F1RST Gen Mason and programs like the Student Transition Empowerment Program (STEP) have been created to assist these students. F1RST Gen Mason is an organization that “[creates] an educational and supportive network that will increase the retention and graduation rate of first-generation students,” according to the F1RST Gen Get Connected profile.

Junior Alicia Brissett, the president and founder of F1RST Gen Mason, said she created the organization her freshmen year in the hopes of giving first generation students at Mason a place to feel at home.

“A lot of times you see with first generation college students…that they tend to feel out of place or they feel like they don’t really have a space, and that causes them to go to another university,” Brissett said. “We want students to feel like this is a place that they can actually see themselves graduating from.”

The STEP program is described as “an initiative in the Office of Diversity, Inclusion and Multicultural Education (ODIME) created to enhance the recruitment, engagement and retention of first generation college students accepted to George Mason University,” according to ODIME’s website.

Junior Shanice Ford, who is a coordinator for First Generation Initiatives for ODIME, said STEP takes high school seniors who have been accepted to Mason and lets them take two classes over the summer as a way to transition to campus and network as well.

Despite the existence of organizations like F1RST Gen Mason and programs like STEP, both Brissett and Ford believe that there is more Mason can be doing to assist first generation students. Brissett said she has heard the university talk repeatedly about the number of first generation students that attend Mason but does not think there is a lot the university actually does for these students.

“As far as resources directly for first generation college students, there’s really not that many,” Brissett said.

Ford agreed with Brissett and said, “I don’t think Mason does a lot in terms of providing resources for first generation students. I think overall, Mason has done a good job of improving their resources, but as to say a first generation student who isn’t from this area, speaking of myself, if I hadn’t known about the STEP program I wouldn’t have known how to acclimate to the college lifestyle and the environment here.”

Ford added that she thinks Mason could do a better job in terms of public relations and advertising lives of first generation students, and also giving credit where credit is due to these students.

“I feel like Mason pushes, ‘Oh we’re diverse; we have a lot of different ethnicities and cultures here,’ but a culture is being first generation and I feel like that doesn’t get publicized or get enough recognition as it should,” Ford said.

Despite thinking Mason could use some improvement in its assistance to first generation students, Ford said she wanted to thank Mason for the opportunity that it has given her.

“As I have shared before I think they could do a better job publicizing on these opportunities,” Ford said, “but nonetheless they have them.”

Brissett added that, “the university resources that we have, like I said, the writing, the math, th etutoring center, CAPS, WAVES, LGBTQ services, all that stuff are perfect to create an environment for not just first geneartion students but for all students to be as successful as possible.”