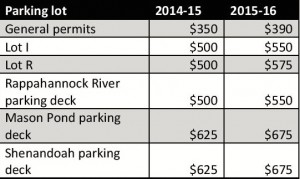 To the disappointment of many students, faculty and staff, the prices for parking permits for the 2015-2016 school year have increased.

“This is pretty much how every university P&T operation is run, just like Housing and Dining,” Cantor said via email.

He said that this year’s projected expenses are over $17 million. He said that includes $6 million in debt service (paying off bonds on $70 million of parking debt that financed past construction); $3.6 million in operations; $3.5 million in shuttle operations; a $720,000 subsidy to the City of Fairfax, so students can ride the CUE bus system; and maintenance, among others. Cantor also added that prices will likely increase in the future.

Cantor said Parking and Transportation decides how much permits cost by calculating the lowest amount permit fees can be while still making enough revenue to cover costs. He continued that in past years fees have been kept lower than necessary and that maintenance reserves have been used to cover deficits. However, with maintenance costs increasing as garages and lots get older, this is no longer possible.

In addition to the rise in permit prices, Cantor has heard complaints from students, faculty and staff who are frustrated by the overall lack of parking spaces. Students like junior Taylor Cox  were confused by the decision to put the new College of Health and Human Services (CHHS) building where Lot H used to be. Cantor said the reason for the building’s location is that at most universities, including Mason, parking lots are actually designed to be building sites.

“[CHHS] was sited on Lot H over a decade ago in the university master plan to form, along with Merten Hall, a great entrance to campus,” Cantor said. “If parking was all that mattered, we wouldn’t have Merten Hall (built on Lot G), Hampton Roads and Eastern Shore residential halls (built on Lot E), Engineering and [the] Art and Design Buildings (built on Lot B), [and the] Mason Global Center (built on [the] back of Lot J).”

To make up for the removal of parking lots, Cantor said there are plans to create more parking decks in the future, but he adds that this will contribute to even higher permit prices due to construction and maintenance costs.

In response to the price increase, students created a petition on Change.org in hopes of lowering the prices.

The petition reads, “Students who attend Mason pay thousands of dollars each year in tuition. In addition to that amount, students are then made to purchase textbooks, classroom materials (iClicker), study materials, and finally the outrageously expensive parking pass. These expenses do not include the necessities students also need such as food and gas. With the rising cost of parking on campus, how are students supposed to afford anything else?”

Cox, who is a supporter of the petition, said she hopes the petition will convince Parking and Transportation to lower the prices of the permits.

“I am not sure if it will be successful just because so many permits have already been sold and it would be an extensive process to refund the permit, [but] my plans to lower the price aside from the petition would probably be to talk [to P&T],” Cox said. “I believe communication is crucial when attempting to achieve change. If I am unsuccessful in changing the prices of the permits this year, I will still continue in hopes of changing the prices for next school year.”