The Northern Neck Starbucks is scheduled to undergo renovations this summer. Work will begin immediately after the final examination period and will end on July 15. During this period, the Northern Neck location will be closed to the public, but the Starbucks in the Johnson Center will remain open. 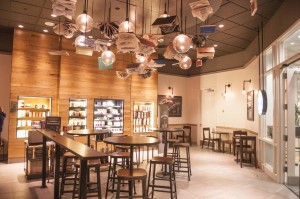 The “wall of chill” at the JC Starbucks.

According to Mark Kraner, executive director of Campus Retail Operations, the Starbucks Corporation requires its stores upgrade every five years to keep up with changes in the company’s products and brand. Northern Neck renovations include adding a “wall of chill,” an open refrigerated section to display sandwiches and other Starbucks food items, a feature that already exists in the newer JC location. In total, the renovations will cost $350,000. Auxiliary Enterprises, a non-academic department at Mason that overlooks business operations, is overseeing the funding for this project.

Despite having an outdated aesthetic, the Northern Neck Starbucks is a fixture on Mason’s campus, one that students and faculty alike have grown to rely on for constant caffeine and a convenient meeting place.

“I believe that a Starbucks is essential on any college campus,” said Molly Thomson, a freshman computer science major. “The 24/7 Starbucks on GMU’s campus is always there for the students who have to stay up extremely late in the night and finish a last minute project or get ahead in their pile of work.”

Though Thomson said she tries to stay away from caffeine, Starbucks is the only place she goes when she needs a fix to help her get through late night study sessions.

Layne Rodgers, a freshman global affairs major, is a devoted patron to the Northern Neck location where she usually goes to study and enjoy a drink. Both her and Thomson believe that the location needs to improve both the quantity and quality of their seating options.

“I would be really happy to see more sitting space in the Northern Neck Starbucks. The coffee shop is always so crowded, and the comfiest chairs or couches get taken up really fast,” Thomas said.

Juniors Maleeha Siddiqui and Julianne Hayag were excited to learn about the renovations taking place, noting how nice the JC Starbucks looks in comparison. Their reactions quickly turned cynical, however, when they learned of the price tag.

“For $350,000, the inside of the Starbucks better look like the Garden of Eden,” Siddiqui said.

Kraner said the Northern Neck Starbucks “has surpassed all expectations of volume and customers.” The university is currently looking at expanding its coffee and tea options, including the possibility of having an Argo Tea Cafe, an international tea chain, in Fenwick Library. Until then, students on campus during the summer will just have to hike over to the JC for their iced skinny vanilla lattes.