This story was originally published in the Mar 2 print issue of Fourth Estate.

In late January, the Mercatus Center released a research paper that supported a recent financial move made by Mason administration – adding to rainy day funds.

Recently, Virginia faced a budget shortfall of $2.4 billion dollars for fiscal years 2015 and 2016. Institutions of higher education were required to return $100 million for fiscal year 2015, and Mason returned $4.7 million.

In addition to the state required cuts, Mason cut an additional $4.7 million to start two rainy day funds, one for the state, and one for the university.

Currently, it is fiscal year 2015, and, according to the Washington Post, tax revenue has increased enough during this fiscal year that more cuts will not be necessary during 2016. Originally, the state expected to cut an additional $272 million.

The paper by Mitchell and Stansel analyzed the relationship between states’ fiscal stress and the size of their rainy day funds using 18 years of data provided from government resources, like the Bureau of Labor Statistics and the National Association of State Budget Officers, among others.

Mitchell and Stansel found there was a consistent “negative relationship between the size of your rainy day fund and the level of stress, fiscal stress,” Stansel said. 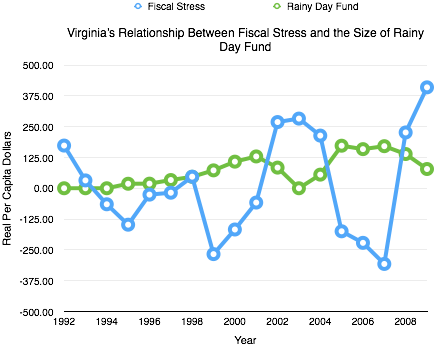 They also found a positive relationship between government spending and fiscal stress.

In the context of this study, fiscal stress is the amount the government expects to spend per person minus how much it actually spends, plus tax revenue. Stansel said they borrowed this definition from the existing literature.

Mitchell and Stansel measured spending using “the average of the percentage increase of decrease in spending by each state each year,” according to their paper.

The economics professors had two hypotheses. First, that they would find a positive relationship between fiscal stress and certain national factors such as unemployment, federal aid and the Consumer Price Index.

“[We hypothesized] there would be some sort of relationship here between these external factors and what we call fiscal stress,” Stansel said.

According to Stansel, the majority of the public believes that these and other factors outside of the states’ control are what usually cause recessions.

“The discussion revolves around external influences and how the economy is down and how the federal government is cutting aid to states, and that sort of thing,” Stansel said.

The paper found the relationship between those factors and fiscal stress to be statistically insignificant.

“We found no significant relationship between those external factors, like say the unemployment rate as a measure of the economy, and federal aid to the states,” Stansel said.

Stansel said, however, that this is not always the case.

“I think most people probably believe that is true and also, really, it’s kind of common sense,” Stansel said.

“You tend not to have budget shortfalls when the economy is doing well so it’s not to say it [external factors] doesn’t matter,”

Stansel said. “But the whole method of economic analysis is that we collect data on all sorts of factors that can affect our dependent variable, in this case the fiscal stress thing, and then we let the statistical analysis decide how important each factor is.”

Stansel pointed to the range in size of shortfalls as evidence that other factors have little effect.

“Every state was going through a recession, but not every state was California or New York with these huge, multi-billion dollar shortfalls,” Stansel said.

Stansel also said the withdraw rules for rainy day funds are important factors in their effectiveness.

“In some cases it is very hard to withdraw money from the rainy day fund, which is a good thing, right?” Stansel said. “You only want to use it for emergencies, but in other cases, if it’s real easy, and they can pull from it for just to pay for everyday spending.”

Their second hypothesis was that the decisions of politicians – i.e. government spending – would have a significant relationship with fiscal stress.

“Our alternative hypothesis was, well, maybe it’s more about what the politicians themselves do, so we included a measure of spending growth,” Stansel said.

According to Stansel, Mitchell and he reached similar conclusions in an earlier paper.

“David Mitchell and I did a paper on this a couple of years ago where we were looking at the 2001 recession, and you get the same idea happening,” Stansel said.

In the conclusion of their paper, Stansel and Mitchell wrote that their findings have “relevance for contemporary public policy issues. It supports the idea that wise stewardship of budgetary resources, in the form of a rainy day fund when the economy is expanding, is an important strategy for minimizing fiscal stress when the business cycle turns downward.”

Stansel said these funds can be useful tools for universities, especially with decreasing contributions from the state.

“Other universities at other states have seen a reduction in state aid,” Stansel said. “We’ve seen it here, and it’s kind of a mass nationwide trend.”

He said Mason made a good decision with the creation of its two rainy day funds.

“I think the university should be applauded for good fiscal stewardship and conserving resources for crises,” Stansel said.

The gray area in “Fifty Shades of Grey”