Enrollment has dropped at more than half of Virginia’s public colleges, including Mason, according to a recent report by the State Council of Higher Education for Virginia.

Out of the state’s 15 public universities, eight lost numbers for total enrollment.

A Roanoke Times article said the enrollment numbers in the report counted “all students enrolled for academic credit, including those studying online and part time.”

Undergraduate numbers actually increased between academic years of 2013-14 and 2014-15, however, graduate enrollment declined far enough to result in a net loss of 949 throughout the state.

Despite these declines, Mason remains the largest public university in Virginia with 33,791 students. 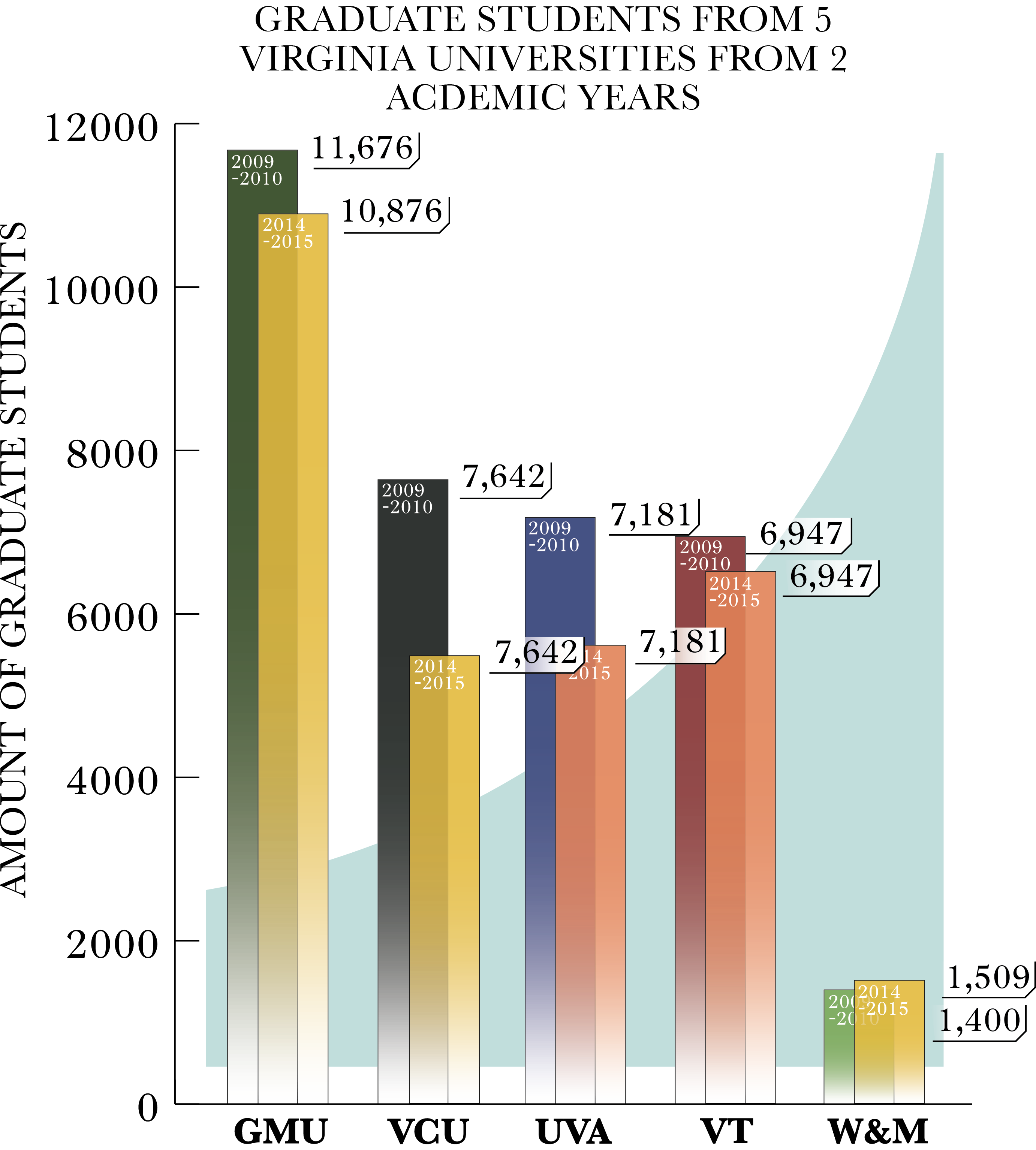 While Mason’s undergraduate numbers increased between academic years, graduate numbers resemble the state-wide trend. Compared to the enrollment of fall of 2009, Mason has lost approximately 7% of its graduate population.

The SCHEV report stated that graduate numbers state-wide have been on the decline since the 2009-10 academic school year, which was a record high for graduate enrollment.

Davis said the university plans to address the admissions process in the hopes of increasing graduate numbers. According to Davis, the comparatively long wait of a Mason decision is contributing to declining numbers.

“Long story short, our competitors are turning around grad decisions in weeks, and on a good day we’re doing it in months,” Davis said.

She said the average wait for graduate applicants is four months, whereas other universities notify students in two or three weeks.

In contrast, Mason’s undergraduate acceptance wait period is much shorter.

“The graduate process is much less efficient, which could explain why our undergraduates are going through the roof and our graduates are declining,” Davis said.

Among the reasons for slow acceptance notifications, Davis said, is that most of the application process takes place offline, and admissions waits for input from faculty members. She said the process also varies from college to college, adding to an applicant’s wait time.

“What we’re looking for is [to] automate as much as possible,” Davis said. “That’s a no brainer, and while we want to leave the decision with faculty, because particularly as a grad student you need a faculty advisor, we want to help expedite those decisions.”

First-professional programs have also seen a state-wide decrease in enrollment. The vast majority of first-professional degrees are in the medical field. Another well-known degree that qualifies as first-professional is a law degree. The SCHEV report said this decline is due to “the lowest level of enrollment in Virginia’s law schools at public institutions in the past 23 years.”

According to the SCHEV report, total Virginia first-professional enrollment “decreased by 1.2% to 4,930 from 4,992 and has been declining since 2011 after achieving a high point of 5,123.”

Currently, 2,113 students are enrolled in public Virginia law schools. According to SCHEV, law school numbers hit a peak in 2007 with 2,583 students.

Davis said one reason the university is trying to increase enrollment is to compensate for a loss of state funds. That was the primary reason for the University Stabilization Fund.

“What we’ve done with that is to focus on areas where we can improve our processes to make sure that our revenue is strong,” Davis said. One of these areas is “redesigning graduate enrollment process.”

Davis said that despite these revenues challenges, Mason remains a good value.

“If you look at your options, and you’re a Mason student, you could have gone to U.Va., William and Mary, a whole host of other options,” Davis said. “Relative to other doctoral institutions we’ve managed to keep our tuition lower than most of your other choices.”

The SCHEV report stated that graduate and first-professional enrollment at private universities is increasing. In fact, those private numbers now exceed those of public schools.