During a Board of Visitors meeting held on Dec. 10, Mason policies regarding sexual violence on campus were discussed, in light of intensified national concern over the issue.

At the meeting, University Life Vice President Rose Pascarell gave a presentation outlining government initiatives such as Title IX and the Clery Act and their impact on Mason’s efforts to combat sexual assault, stalking and domestic and dating violence.

“In general, I think both Title IX and Clery together, if followed and if universities are in compliance, really create a good starting point, a good roadmap to addressing, educating about and responding to sexual violence,” Pascarell said. “And I’m happy to say we’re in compliance with both.”

Title IX is a federal statute passed as part of the Education Amendments of 1972. It is intended to safeguard equal treatment of and opportunities for individuals in educational institutions, regardless of gender.

Initially, the law concentrated on athletics, since schools often spent considerable amounts of money on boys’ sports teams while providing little financial support and few resources to girls’ teams. However, it has recently also been applied to sexual assault cases and other forms of sexual misconduct.

“Not addressing sexual assault on a college campus is gender discrimination,” said Caren Sempel, Associate Director for Interpersonal Violence Education and Services in Wellness, Alcohol and Violence Education and Services. “Typically, the offenders are males and the victims are females, and the offenders stay and graduate from college, but the females quit and leave school. So, it’s not fair. It’s not equal.”

Title IX requires schools to respond to sexual assault complaints in a timely manner and afford victims the same rights and resources as the people they accuse. This includes the privilege for both sides to call upon witnesses for the hearing and to receive the results simultaneously.

Cases related to Title IX are handled primarily by the Office of Student Conduct. Assistant Director Brent Ericson has worked to make sure the victim and defendant get an equal amount of time in front of the board during hearings.

“They’d both have about 45 minutes, so it wasn’t just one person in the room the whole time making that connection with the board members and the other person not,” Sempel said. “Some victims want to be in the room, and that’s their right and their choice. But if they don’t, it’s a question of, how can we make it as fair as possible without re-traumatizing them?”

Failure to comply with Title IX rules can result in the withdrawal of federal funding, a government investigation or individual legal action against the institution.

“Using Title IX is very innovative and I think could be very effective in addressing sexual assault on campus,” said Angela Hattery, Director of the Women and Gender Studies program. “If you’re found in violation, there could be financial consequences, and since universities respond to financial consequences, if there are some Title IX lawsuits that are successful and it costs universities money, it will change the way that they deal with sexual assault on campus.”

Mason’s Title IX Coordinator, Herbertia Gilmore, is responsible for supervising the conduct process and making sure victims are treated fairly.

The Clery Act requires that universities publish statistics of crimes that occur on campus in an annual security report. It includes anything from sexual assault to robbery.

The law was passed after the 1986 rape and murder of Jeanne Clery, a freshman at Lehigh University.

“[The family] realized there had been a string of crimes on her campus and they were never told,” Sempel said. “Nobody knew whether the campus was safe or not.”

In 2013, the Clery Act was amended to incorporate the Campus Sexual Violence Elimination Act, which requires universities to include domestic violence, dating violence and stalking statistics in the annual security reports in addition to information about sexual assaults.

The reports are compiled by Eric Fowler, a second-year graduate criminology, law and society student who serves as Clery Act Compliance Coordinator for the Mason Police Department.

Under Title IX, faculty and staff are considered “responsible employees”, meaning they have to report incidents of sexual assault and violence to the Title IX coordinator. According to Hattery, this could be damaging rather than beneficial for victims.

“Because of what I teach and what I do, a lot of women do disclose to me and they don’t want to report it; they just want to talk about it,” she said. “Say you came to my office and shut the door, and I have to say, ‘Look, before you say anything, let me tell you that I have to report this.’ You’re going to walk out the door, and you’re not going to get the support. You’re not going to get my expertise.”

Since they are confidential resources, WAVES, Counseling and Psychological Services, Student Health Services and clergy are not obligated to disclose any information other than the basic statistics needed for the annual security report.

Colleges are also expected to offer awareness and prevention programs to educate students and staff about sexual assault, harassment and violence. Mason’s WAVES office offers bystander training as well as Emerge, which teaches people how to properly interact with sexual assault and abuse survivors.

“We would like to reach as many people on campus as possible with information about [being a] bystander, about healthy relationships, about what their rights are,” said WAVES Director Mary Ann Sprouse, “so that when something happens, they know where to go and they know what to say and do.” 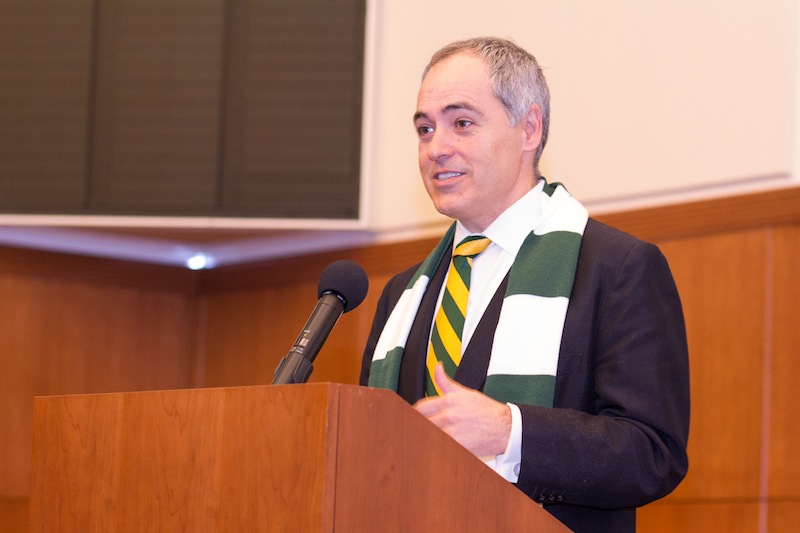 Besides the educational programs, Mason has taken several other steps to combat campus sexual assault. In 2014, President Ángel Cabrera appointed a task force to assess university policies and programs and find areas to improve.

“We’re doing lots of good things here, but I’m sure there are gaps, things we could be doing or things we could tweak to make [our policies] more effective, to widen our reach,” said Sprouse. “How can we get everybody involved in addressing and eradicating sexual violence?”

The task force is scheduled to give its recommendations to Cabrera later this month.

Sempel is hopeful that the increased attention devoted to sexual assault and violence in universities will trigger positive change and create a healthier campus environment.

“As more people are made aware of what their rights are and the obligations of the university, I think that can only make the institution better,” she said, “because it’s being held accountable and students are feeling that they’re safe here. They can come and focus on what they came here to do, which is to study hard and get a degree.”