A Mason graduate student has created a new program that will provide companionship through cats to people with Autism and other developmental disabilities.

“[CATC] is basically a charitable project where I’m taking rescue cats, who might otherwise be in danger of being euthanized or put in shelters, and training them to be emotional support animals for people with developmental disabilities,” Mooney said.

Mooney said she was inspired to create CATC by her own cat Hazel who she says has been a great emotional support for her. 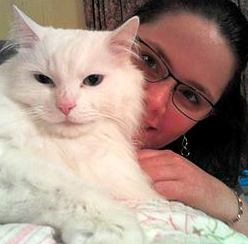 Mooney and her cat Hazel

“I did a lit review and found that animal companionship can improve communication and social skills,” Mooney said. “And I thought hey, what if I can take this research, take my own experience, and I could turn it into something really cool.”

“When I receive an application [for a cat], I find out a little more about the person and then I contact trainers or animal fosters,” Mooney said. “I’m not just restricted to those who apply through the website, I might go on Craigslist and find animal shelters or [talk to people] who know good fosters who I could talk to about finding the perfect cat for this person and then [the cat] would be trained up.”

While her target participants are those with autism, Mooney says the program is not limited to just that audience.

“The research shows that [cats] are helpful in numerous populations [like] mental illness [and] physical illness, so it wouldn’t be restricted to just developmental disabilities, that’s just my target participants,” Mooney said.

Mooney is based in Fairfax, but she hopes to expand and grow the organization and has already received some international requests for cats and training, some as far as Australia. Since Mooney cannot be there herself to help with the training and pairing, she is also creating educational materials to help people train cats and find good candidates for the animals.

The organization is still new, but Mooney hopes to have many more cats and trainers in the future and is excited to see the results.

“I would love to hear from those people about the improvements in [participants] lives [and] maybe have a testimonial section on my website that talks about it,” Mooney said. “I look forward to learning more about research and spreading out to people who are interested. I’m just hoping to touch some lives.”

A Safe Environment for the LGBTQ Community