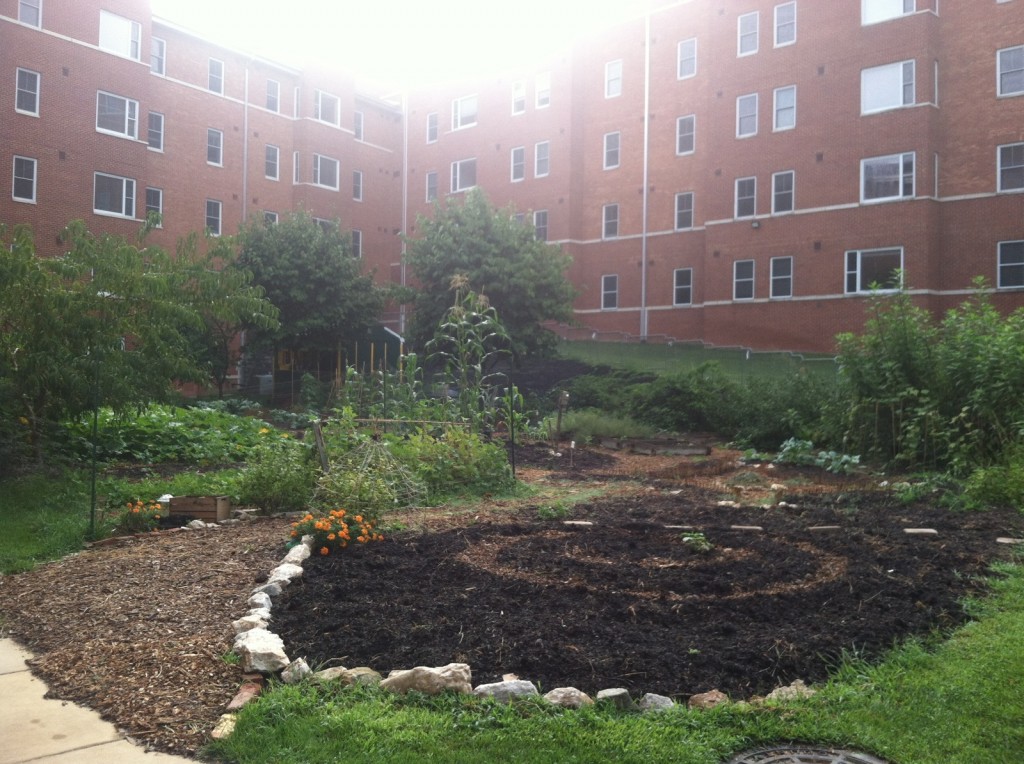 The organic produce is an expanding trend on Mason’s campus.

Not only does the Office of Sustainability sponsor a weekly farmer’s market, but there are also a number of gardens and greenhouses on campus dedicated to growing produce.

Students could purchase these organic vegetables from the GOGA kiosk in the JC last Thursday.

The food grown at Potomac Heights is not limited to tubers and lettuces. In the summer, all kinds of organic fruits and vegetables are grown there and sold to students and given to charity.

“One of the main missions is that 50% of the food that is produced in the garden goes to the volunteers, and people who work in the garden, and the other 50% is donated to local food banks in Fairfax,” Christine Harris, who runs the Potomac Heights Vegetable Garden, said.

Those food banks include Food for Others and the James Mott Community Center. The latter of which, in addition to providing free food to those in need, “also provides skills to lower income communities and gives out clothing,” Harris said.

Harris explained seeds are not covered under the list of items that can be purchased with student organization funds. GOGA also generates money from selling the overflow from harvests each season and from the spring seedling sales.

Everything grown in the Potomac Heights Vegetable Garden is grown organically. All the food is grown without the pesticides, herbicides or chemical fertilizers that can cause cancer and damage the Chesapeake Bay watershed.

“It’s cool because we can charge pretty cheap, we like to make a little bit of money because the money we make from selling just goes right back to [buying] seeds,” Harris said. “So it’s cool that we can still make a little bit of money, but we can provide food for a really cheap price, and it’s super organic, and how much more local can you get than growing it right on campus?”

For those in the Mason community concerned about buying local and buying organic, the Potomac Heights Vegetable Garden offers a solution.

The typical perception of the organic and local foods bought at Whole Foods and similar places is that they are more expensive than regular, non-organic foods. Also, finding local, organic food in the Northern Virginia area can be difficult, as there are few farming plots in the immediate area. In 2009, the Potomac Heights plot became the first organic garden on campus. In 2012 the Innovation Food Forest was added to that list when Elizabeth Torrens, a Mason staff-member, took the 2012 Permaculture Design Certification course and designed a garden outside Innovation Hall.

When students got involved, they were able to apply for a Patriot Green Fund grant, which according to the Office of Sustainability website, “is a $100,000 per year sustainability fund that is devoted to making Mason’s campuses more sustainable through facility improvements and student research projects.”

With a portion of money from the PGF, and the motivation from those involved, the Innovation Food Forest has grown a variety of edible plants, including figs, peaches, currants, strawberries, and chives, among many others.

This year has also seen the addition of a greenhouse for academic use and a greenhouse reallocated for gardening purposes.

The first is the greenhouse by Potomac Heights and the under-construction Taylor Hall. This greenhouse used to be for biology and ecology classes but has been granted to the Office of Sustainability since the academic greenhouse in Exploratory Hall is open.

Danielle Wyman, the Office of Sustainability Outreach and community engagement manager, explained they had a lot of ideas about how to utilize the greenhouse.

“We wanted to go ahead and try something new and innovative so we decided on hydroponics and aquaponics,” Wyman said.

Both are ways to grow plants in “soil-less” mediums.

At the moment, volunteers are planting crops like winter rye and other cover crops. As soon as the greenhouse gets the rest of the grow lights and filtration systems set up, with the help of Tom Calhoun at Facilities Management, the greenhouse will begin growing leafy greens, lettuces and microgreens.

“The majority of what we’re going to be growing is going to be served in Ike’s. So it’s like maybe 50 yards from the door to the greenhouse to the door to Ike’s, so it’s literally farm to table, it’ll be really cool. It doesn’t get much more local than that” Wyman said.

Another gardening operation starting up on campus is the Community Cultivation Center, which is so named for being a pay-for-plot community garden located in the center of the Potomac Heights Vegetable Garden.

Roger LeBlanc Jr., who is an Environmental and Sustainability Studies major at Mason, started this project with Elizabeth Dupois, Andy Sachs and Alex Ayala, all members of the Sustainability LLC.

“The inspiration came from talking to resident directors within housing on campus who live on campus, they live here and they said ‘oh I wish I had a place where I can grow my own food personally that I can cook with,’” LeBlanc said. “We wanted to create this for students and staff who live here and want to grow their own food and kind of experiment with that.”

To pay for the raised beds required to create the Center, the group acquired a PGF grant. But in order for the plots to be self-sustaining, there needs to be a fee attached to the plot rental.

Anyone from the Mason Community can grow organic food at the Community Cultivation Center for a fee of $10 a month. The cost covers use of the plot and use of GOGA’s gardening tools and compost.