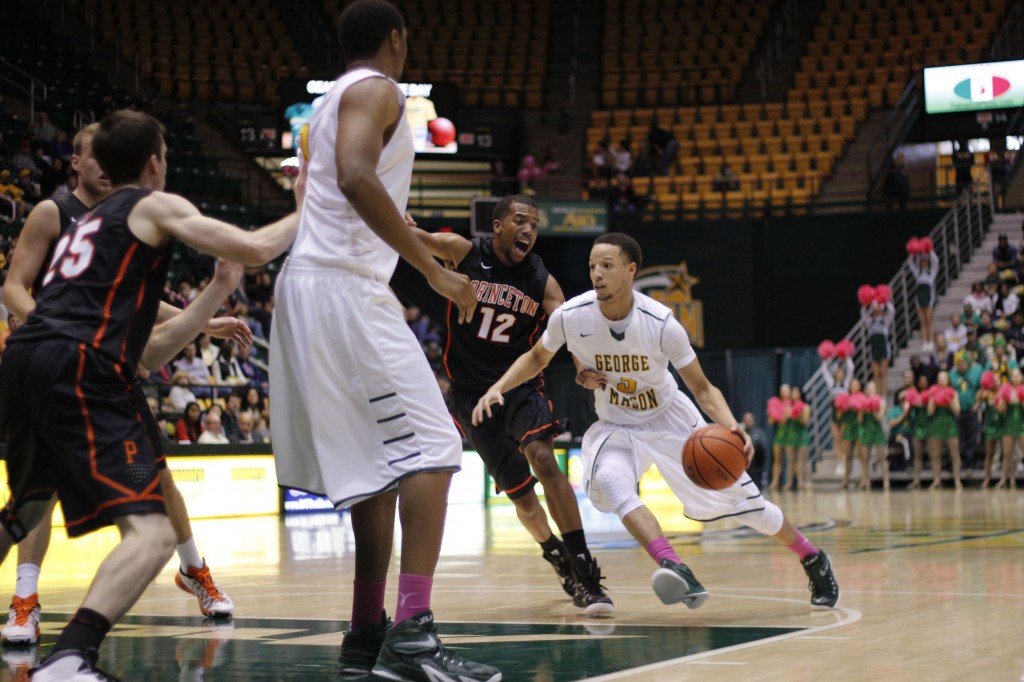 In a game where Mason led by as much as 17 points, the game was decided in the final possessions.

After it seemed like the Patriots had shed the issues of Friday night’s season opening loss to Cornell, the Patriots were only able to put the game out of reach of the Princeton Tigers in the waning seconds and won 63-60.

The Patriots got off to the start they were hoping for on Friday night, going on a 22-4 run over 10 minutes in the first half. Princeton attempted to follow the same strategy that Cornell took to victory by living and dying by the three-pointer. For the first half, it worked in Mason’s favor.

18 of Princeton’s 28 shot attempts in the first half were from three-point range, and the Tigers were only able to convert four of these shots.

Mason was able to stick t0 their game plan of establishing an inside game. On Friday night’s season opener, the Patriots scored 18 total points inside the paint. They were able to match that after the first half against Princeton.

Junior guard Patrick Holloway was a beneficiary of this established post presence early in the game, with 19 points while logging a team-high 36 minutes played, and believed it allowed Mason’s offense to be more creative in finding ways to score throughout the game.

“We came back tonight, played harder and more aggressive. As coach said, there was more emphasis on throwing the ball inside so we kept doing that with the first four or five plays, it worked and Shevon [Thompson] was scoring so we just kept trying to do that and that opened up the offensive game much more,” Holloway said. “Because they were collapsing on the big men and that let the shooters open, so the shooters’ percentages for this game for threes was, I don’t want to say much better than last game, but we didn’t shoot that many — which was probably a good thing too.”

Mason’s 11 attempted three-point shots today was a sharp decrease from the 27 they shot against Cornell.

The issues of Friday’s opener reared their ugly head in the opening minutes of the second half when Mason struggled to score from the field and Princeton came out of the locker room like a different team.

The Tigers threatened to knot the game up, coming out seven of 10 from the field, but then went on a cold spell before being able to capitalize on their hot start.

The second half then turned into both teams trying to grind out points, with neither team able to generate any offensive momentum. Princeton chipped away at Mason’s lead and was able to cut it within two with 24 seconds left in the game.

Mason struggled to hit some of their free throws while letting Princeton back into the game with good shot looks from the perimeter and gave concern to Patriots fans in attendance, but the team scored just enough to seal the game.

Freshman center Trey Porter, who was the only freshman that did not play in Friday’s loss, made his season debut today with senior forward Erik Copes sidelined by a shoulder injury. Porter made an instant impact with two consecutive blocks in his first defensive sequence. Porter finished the game with one more block and two rebounds.

“I out-thought myself on Friday, I thought I had a veteran guy in [Copes] and said, ‘let’s see how it goes,’ typically I don’t like playing freshmen a lot in the first game — last year Marquise Moore didn’t get off the bench in the first game and by the end [of the season], he was our starting point guard,” said Head Coach Paul Hewitt. “Regardless of [Copes’] injury, [Porter] was going to play today because he provides energy and makes some momentum-changing plays.”

Princeton forward Hans Brase led the Tigers in points and rebounds with 17 points and 14 rebounds.

Mason now travels to Puerto Rico for the Puerto Rico Tip-Off tournament which will be broadcast on ESPN. Their first game in that tournament will come Thursday, Nov. 20 against West Virginia University at 7:30 p.m.

The health status of forward Erik Copes is day-to-day with a left shoulder injury. Coach Hewitt said that Copes will be getting an MRI on the shoulder shortly.

Robbed of the Good Years