Computer science majors have something to celebrate this week. According to a recent survey, Mason’s computer science graduates are in the top quarter of graduates nationwide by highest salary earning.

The survey, conducted by the salary information website Payscale.com, reported that Mason graduates can expect to earn a $59,700 salary in their early career and $110,300 salary in the middle of their careers.

The salary averages are based on computer science graduates with bachelor’s degrees that hold no other or higher degree. Overall, Mason ranked 38 out of 161 schools across the U.S.

“Part of the reason why our graduates are doing well is because graduates in this area tend to have higher salaries. The cost of living is higher so salaries are correspondingly higher too,” said Sanjeev Setia, chair of the computer science department at Mason. “But it’s also the fact that our graduates are well qualified to get good jobs.”

Setia, who also teaches courses in computer systems, attributes this job-preparedness to the resources that students can take advantage of in the computer science department.

“The fact that we are a large department allows us to offer courses in a wide variety of areas. We have courses in cyber security, robotics,” Setia said. “I think that’s one of the distinctive features of our program. Our course offerings are pretty diverse. A student coming here has the opportunity to take courses that a smaller department might not offer.”

Setia notes that a large portion of the computer science faculty are involved in research, a fact that he says is vital to success in the classroom and in the workplace.

“The students here have the opportunity to learn from faculty who are on the cutting edge,” Setia said. “It’s important to have faculty who are engaged in research, especially in a field like computer science where the field changes all the time.” 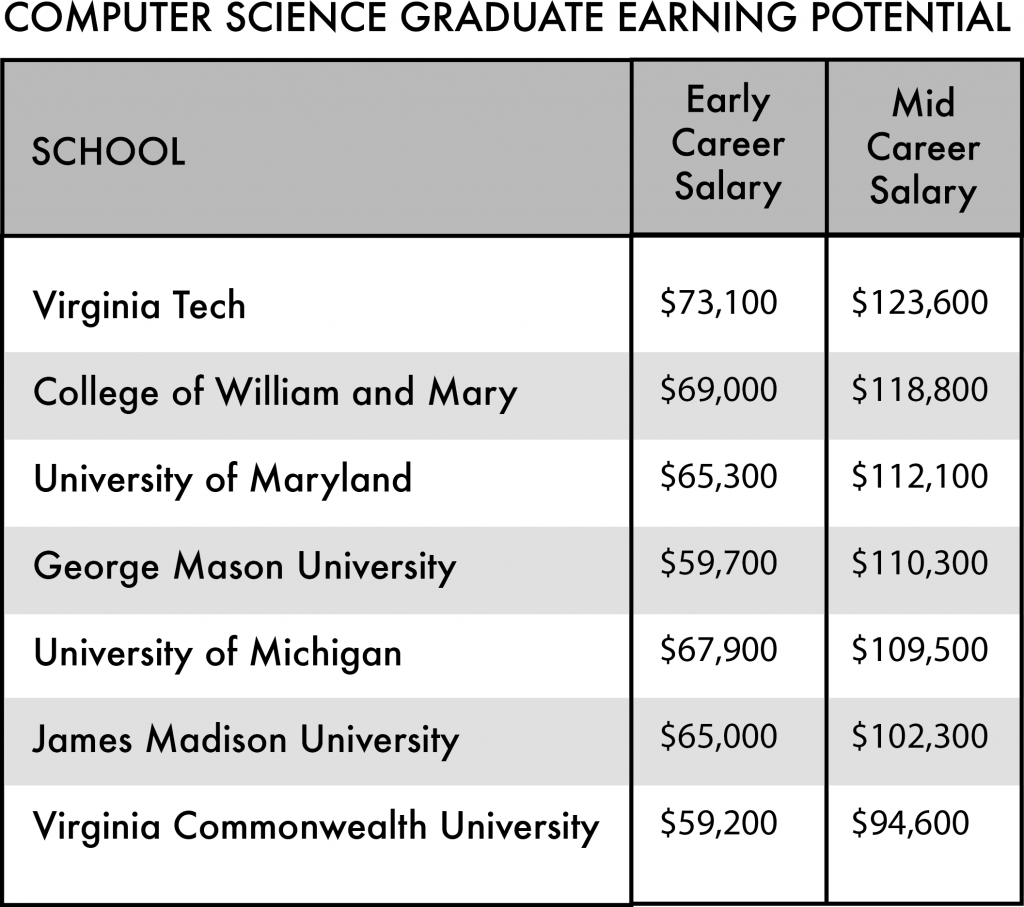 John Miller, a junior computer science major, said that this access to current research is one of the draws of the program.

“What I really like is that each teacher has their own little spin they put on classes. They still get across the major point of what they’re trying to teach,” Miller said. “But they add different little things based on their area of expertise.”

Miller, who wants to specialize in programming and artificial intelligence, believes that the proximity to such a large base of technology companies is also extremely beneficial.

“The closeness with employers does create a very practical learning environment,” Miller said.

Claire Cecil, a global affairs major and computer science minor, believes that the hard work of its students is a major factor in Mason’s high ranking.

“Mason graduates land such high paying jobs because they seem to generally have the dedication and passion for what they do,” Cecil said. “I’ve also noticed that Mason has tons of resources and events for students to attend in whichever subject they study.”

According to Setia, these factors prepare students for the competitive and rewarding computer science industry.

“Computer science is a great field because in some ways it’s one of the central fields of the 21st century,” Setia said. “Whether you’re doing biology or geography or the arts and humanities, you’re using computers. As a computer scientist, you have a lot of options as far as careers are concerned.”

Cecil considers computer science to be vital to the development of a better world.

“People are dreaming up new technology as I write this, and the world always needs people who can take that technology, pull it apart, and put it back together,” Cecil said. “I also believe that Mason in general is a special school. The attitude here is different; the people are very passionate about what they do, yet they are not only focused on grabbing grades. That really makes a difference in the kind of people who walk out of here.”