An online magazine staffed by several Mason professors and graduates has become one of the top publications in Middle Eastern studies.

Jadaliyya, co-founded by the director of Mason’s Middle East Studies Program Bassam Haddad, provides in-depth commentary on current events and culture in the Middle East. It has received high praise from scholars in the field with articles regularly appearing on college class syllabi across the country.

“What we’re looking for is something that adds to our knowledge in ways that are original, in ways that are refreshing, in ways that are valuable to the people of the region,” said Haddad, who teaches in the School of Policy, Government and International Affairs. “It’s that organic quality that we seek, which keeps us in touch with the region.”

The New York Times recognized Jadaliyya in an Oct. 12 article, cementing its reach beyond the academic world. 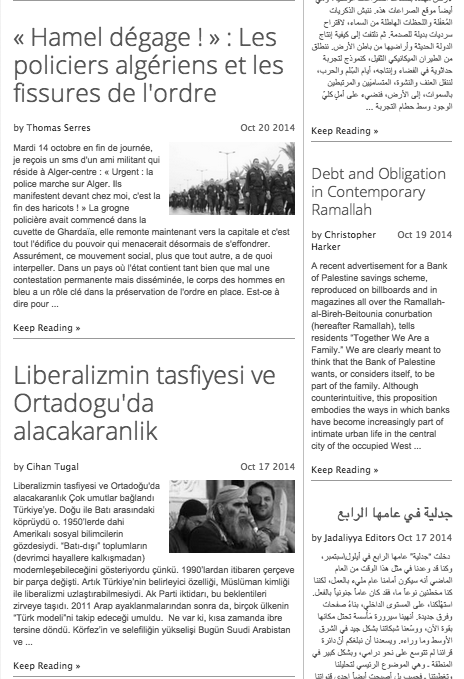 “The magazine is read nearly globally,” said Noura Erakat, a co-editor of Jadaliyya and assistant professor in New Century College at Mason. “The fact that it’s featured in the New York Times means it has mainstream relevance that’s undeniable. It has a trajectory of growth.”

Haddad and Erakat attribute the magazine’s popularity to its unique coverage, departing from traditional analysis on the Middle East, which tends to emphasize politics and foreign affairs. In contrast, Jadaliyya covers a variety of topics, from gender and law to language and art.

According to Haddad, this not only broadens the publication’s potential audience but also provides a more thorough, accurate picture of Middle Eastern society.

“We are trying to cover the entire region from east to west, as opposed to many other publications, which say they are covering the region but only focus on the hot topics,” Haddad said. “We’re actually trying to cover even the marginalized countries that don’t get much press.”

The magazine aims to combine, in Erakat’s words, scholarly expertise and local knowledge.

“The most serious blogs [on the Middle East] were… mostly concerned with what lawmakers believed, so they’re very policy-oriented and oriented to U.S. national interests,” Erakat said. “There were no blogs that reflected both an internal discussion to those people who live in the Middle East and reflected their interests as well.”

Jadaliyya also benefits from what Haddad calls its “indigenous element.” Many contributors live in or originate from the Middle East, allowing the magazine to incorporate local experiences, perspectives and ideas.

“People say that Jadaliyya represents people in the region because this is also who writes for Jadaliyya,” Haddad said.

Haddad first envisioned Jadaliyya in 2003 as a blog to accompany the Arab Studies Journal, the peer-reviewed publication he and some colleagues had started in the early 1990s.

However, by the time it officially launched in 2010, the political climate in the Middle East had changed. What was supposed to be a casual side-project turned into a more all-consuming venture.

“As a result of the Arab uprisings, which began within three months of Jadaliyya’s establishment…” Erakat said “It suddenly takes on a different character of being more than just blog-ish and instead having essays that reflect someone’s entire corpus of their scholarly pursuits.”

Since then, the magazine has expanded from its original six founders to include 21 editorial teams, each specializing in a different topic or country.

Produced by the non-profit Arab Studies Institute, Jadaliyya is run primarily on a voluntary basis. Only in 2011 did it receive external funding from the Social Science Research Council and the Open Society Institute.

Contributors are recruited through the editors’ pre-existing professional and academic networks, though as the magazine becomes more prominent, more readers request to participate.

“Once we reached a certain level where people developed faith and confidence in what we were doing, [Jadaliyya] basically promoted itself and attracted automatically people who wanted to be heard,” Haddad said. “Now they have an option that is not part of the dominant narrative in the United States on the Middle East; they have an alternative viewpoint.”

Reflecting its roots as a project among friends, Jadaliyya does not follow a hierarchy. Writers come up with their own story ideas, and the editorial team collectively agrees on which ones to publish.

This structure generates a strong sense of solidarity but can also pose some challenges.

“This is not a blind review process,” Erakat said. “Everybody knows who the editors are, so if a piece is rejected, everyone knows who rejected that piece. There are sensitivities involved regarding the ego.”

Some have criticized Jadaliyya for its visible political stance on events such as the 2013 military coup in Egypt and the ongoing Israel-Palestinian conflict. The New York Times profile described the magazine as “left-of-center.”

The editors acknowledge that they work within a specific perspective, often critical of Western policies and activities in the Middle East. However, they find the critique misplaced.

“I consider everything political,” Erakat said. “News is not unbiased. There’s no such thing as objectivity. I also believe that scholarship, in all of its senses, is biased because you begin from a certain place. There’s a particular point of departure that’s picked to the exclusion of other points… and I think that makes it political.”

Haddad mentioned that in offering an alternative to mainstream media, which he said tends to be moderate or conservative, Jadaliyya is “automatically labeled ‘left-of-center.’”

“But if ‘left-of-center’ means we have a disproportionate interest in social justice issues, issues of equality and issues of gender rights and sexual rights,” Haddad said. “Then we’re comfortable with that label.”

In addition, the editors refute the notion that Jadaliyya ignores conflicting viewpoints or discourages debate.

“[The editors] conduct quarterly meetings in which they discuss possible ways to improve and how to address them,” said Zaina Konbaz, a Mason graduate who serves as assistant editor for Jadaliyya’s Egypt page. “Additionally, Jadaliyya has thousands of contributors and over 80 volunteers living in different countries. I think the magazine has surpassed the issue of homogeneity.”

As stressful as it can be, Jadaliyya is a source of pride for those who work on it.

“You don’t work for the magazine,” Erakat said. “It almost feels like you’re working for yourself because you’re not doing this work for anybody. You’re doing this work and you’re very much a part of it. And it’s absolutely fun.”