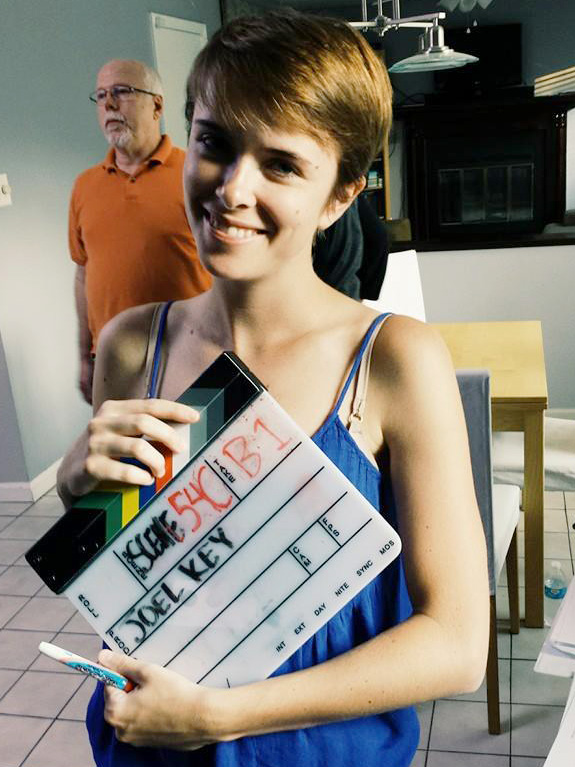 A recent Mason alum has entered the field with a current job position as an assistant editor for Ventana Productions in Washington, D.C., after graduating with a BA in Film and Video Studies from Mason this spring.

Ashley Blue decided to pursue this career path during her senior year of high school after seeing “Slumdog Millionaire” at the theater.

“I felt so moved and empowered that I wanted to do to others what it had done to me in a visual,” Blue said. “I had also loved editing home videos and little projects for classes. My dad instilled in me a passion for documenting life through pictures and videos. When I was little, I’d steal his camcorder and record myself doing silly dances and things like that. However, I apparently never bothered to delete them, so my dad enjoys embarrassing me with those.”

Blue also points out her childhood as part of her inspiration.

“Growing up as a TV child, I realized that I already had a foundation of understanding visual concepts such as pacing, framing, etc. because of my constant, perhaps excessive, exposure to them. However, I knew I had a lot of catching up to do,” Blue said.

Joining the FAVS program made Blue feel intimidated, as she felt the competence by the classmates who had studied film throughout high school and already had set experience.

While attending one of her classes, Blue met her friend Micah McFarland, who introduced her to the Hand Me Down Films team.

“They’re very supportive and fueled my passion for film as I learned a great deal by getting involved with them,” Blue said.

Later she realized how television, films and commercial media had largely impacted her perspective as an adolescent, both positively and negatively. While they have shaped her into becoming the storyteller she is today, she had generated false ideas about success and beauty.

“I became obsessed with my appearance, trying to fix my bodily imperfections, buying clothes and material things,” Blue said. “I was searching for happiness in all of the wrong places, and I think my misinterpretation of the prevalent media had a lot to do with those sulky-teen years.”

For that reason, one of her goals as a filmmaker is to advocate media literacy among children and adolescents.

“Today’s youth should understand how to interpret the millions of visual messages they are exposed to daily,” Blue said. “An English teacher I had in 9th grade not only presented us to film analysis, but the manipulative power of advertising.  With technology playing a role at a much younger age, I think these lessons should be established to children much sooner.”

Within her academic background, she received a scholarship from Mason for her story pitch for “Wingboys,” her recent project featured in the Best of FAVS Showcase earlier this month. The scholarship included money that went towards the production of the film. She was also honored to receive the Film and Video Studies Achievement Award for her work and involvement outside of the classroom.

“She created the FAVS Women in Film group and inspired the creation of a Women in Film Week which we held last spring. She also interned at GMU TV and Sirens Media,” said Giovanna Chesler, the director of Film and Video Studies.

As for now, Blue plans on staying at Ventana for a while.

“I’m learning a lot there, making good references, and I’m living on my own so I have bills to pay,” Blue said. “If there’s room to grow in the company, I would like to make the move to editor one day.  I’d also like to be a producer and director at some point in my career.  But as for now, I’m just living in the moment and getting used to the real world.”

“My biggest tip would be to take feed back seriously. If I had stuck with any of the first 10 drafts of Wignboys, it probably would have been crap! It takes courage to share work with others, but know that most everyone feels insecure about it too,” Blue said.

She doesn’t have one particular mentor, but she has a lot of film friends from Mason that she goes to for feedback or advice about the industry.  A lot of them have also brought her to freelance gigs, which have helped her get the job that she has now.

“I’m so thankful that we are able to help each other out in that way,” Blue said.

Blue and her crew are starting up a Kickstarter Campaign to raise money to send “Wingboys” to more festivals around the country.

Their plan is to ignite promotion of their film, gaining viewers responses. The campaign itself will be running for three weeks.

As her professor Ben Steger says, “finishing the film is only fifty percent of the job, the other fifty is getting it seen.”

“Any support would be profoundly appreciated on behalf of myself, as well as our wonderful, hard-working cast and crew,” Blue said.

Photos courtesy of Ashley Blue, screenshot from the film “Wingboys.”