The petition calls for either a pedestrian bridge, speed table or  a raised intersection at primary sections of the two heavily traffic areas. A speed table is a form of a speed bump, but is flat on top and long enough for the entire wheelbase of the vehicle to rest on top. 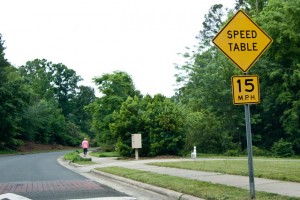 Fourth Estate searched for the petition organizer, Jeff Pareja, on  the university database, Facebook and White Pages, but there were no results in Fairfax, Virginia on any of these websites.

Mayor Silverthorne said he could not comment on the petition because it’s about county policy and he represents the city. Nabavi, who was also mentioned in the petition, was asked to comment, but she had no knowledge of the petition.

“At this time we have not [talked to Pareja], but we plan on releasing a statement to Mr. Pareja/all petition signatories on the petition website,” Cook said.

Cook says that there are challenges in responding to the petition’s requests for speed tables or raised intersections.

“Speed tables and raised intersections are traffic calming measures intended for residential streets posted at or below 25 mph. Braddock Road and Route 123 are high-speed, high-volume roadways and the Virginia Department of Transportation (VDOT) does not allow these types of traffic calming devices to be placed on them,” Cook said. “It is important to remember that the state of Virginia, and not Fairfax County, owns the roads. So we have to follow the rules and regulations of VDOT.”

“I live on campus and have friends living in a house across Roberts road and the walk is dangerous between campus and there,” Geiger said. “[I] will be living there next year so I would like to see a safe walkway to get there.”

According to Mason’s Director of Parking and Transportation Josh Cantor, the university is aware of the petition as well. He said that the request for a pedestrian bridge would be difficult to accomplish because even a small pedestrian bridge costs millions of dollars.

According to Cantor, Mason has and is currently working closely with Fairfax County and VDOT to insure pedestrian safety in the campus area. Cook also said that the Braddock District has already taken measures on this concern with multiple construction projects. A recent project is the pedestrian crossing improvement on the Roanoke Road and Braddock Road intersection.