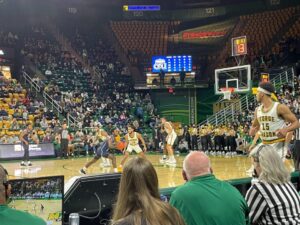 It was an unfortunate loss, the first at home, for the Patriots as they attempted to hold their own against the Monarchs. With a final score of 60-50 in favor of Old Dominion, this marks the fifth straight loss for the men’s team.

Now, with a current record of 4-5, the team strives to make adjustments with the absence of junior Xavier Johnson — who will also not play in the team’s next game against Navy due to COVID-19 health protocols. Junior Joël Kabimba was also out Saturday night due to illness.

“This is the worst we [have] played this season. This is our worst loss season and I’m sorry for our fans that sit through that — but we’re building it,” head coach Kim English said. “We’re going to get tougher, we’re going to get more competitive. Now we’re going to continue working hard and we’ll figure it out.”

English also noted that, in his seven years of coaching, he had never had a game where he wished he also could play — until this one.

“This game, I wish I could have put a jersey on,” English said. He said the program will continue to build upon the competitive mindset that’s necessary to play with and win at a high level in college basketball.

The Monarchs tallied the first points in the game, setting the pace for the rest of the evening. The Patriots would go on to lead the game for less than 5 minutes, though they ended the first half up by one point.

Things became intense in the second half, earning the Patriots two technical fouls.

Davonte Gaines received a technical two minutes into the second half, and another play earned English his own technical around the 13-minute mark.

“Malik Henry had a dunk and I jumped up on his dunk trying to invigorate some fight in our guys and excitement and I jumped as he was going to finish the ball and the official Trey Styons thought that that was a gesture at him … he interpreted that as a warning, a technical foul,” Gaines explained.

Mason’s dominant forward, Josh Oduro, had an uncharacteristic start to the game with five turnovers. The second half proved to be better for the junior, who ended the night with 14 points and over 34 minutes of play.

But there were some moments which showed that the Patriots could have had some fight coming back from 10 days off. Gaines took a hard charge with 8 minutes left in the first half, earning him thunderous cheers from the crowd, and three three-pointers from DeVon Cooper earned him the same sort of hype.

The Patriots will next face Navy at EagleBank Arena on Tuesday, Dec. 7.

TIS THE SEASON TO SIT WITH YOUR AMYGDALA