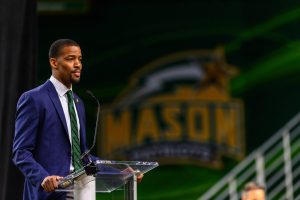 “A strong basketball program serves as a beacon of light for our university and our community,” said President Gregory Washington at the press conference. “The head coach of our basketball program serves as a key ambassador to the university. Kim fits this bill. He lights up a room. He brings enthusiasm and energy that will be infectious to our team and the university. We know we’ve made the right choice here and the Atlantic 10 will find that out shortly. I’m excited about the direction the program is going.”

“Kim is authentic and has the great ability to connect with everyone he meets,” said Mason Athletic Director Brad Edwards. “When you get the opportunity to sit and visit with him, you’ll see firsthand why he commands so much respect from his players, his coaching peers, NBA executives and everyone with his sphere of influence.”

He continued, “Over the course of his career as a coach, Kim has made an indelible impact and touched the lives of so many of his players. That legacy gives me so much excitement and the confidence that Kim is the perfect fit to lead our men’s basketball program.”

The Baltimore native has high hopes for his time at Mason.

With every major player on the Patriots’ roster in the transfer portal, English will have his plate full having to re-recruit them back to Fairfax on top of recruiting other transfers to come to Mason.

“I’m committed to our guys, committed to making everybody better,” said English. “We are going to be a team that makes Mason Nation incredibly proud. We are in the middle of the most fertile recruiting area in the nation. It’s already a national brand and we will continue to build it on the court, in the classroom and the community.”

English says he has a tough out-of-conference schedule in mind for next season and Mason Nation will wait eagerly until tipoff in November.