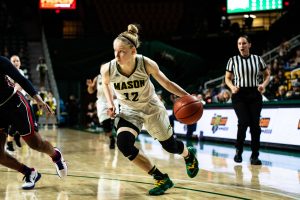 “School is closing, go get your stuff,” assistant coach Bob Dunn said back in 2020. This was the start of the most stressful week of senior Marika Korpinen’s life.

“Everything was closing, I panic-packed everything. I first bought plane tickets for me when I was supposed to go home in May. Then, I bought a plane ticket for the following Tuesday, but that got canceled while I was packing my stuff on that Saturday.”

Korpinen proceeded to call her parents to find other alternatives. “Get a plane ticket for tonight,” they said.

A thousand dollars later, Korpinen booked a ticket to Helsinki for the night of. However, when she arrived at the airport, it was a different story.

“You don’t have a ticket,” the airline employee said to her. “What do you mean? This money went from my account,” Korpinen said.

The check-in associate told her again that they didn’t have a ticket on file for her.

“I have bought three plane tickets and I can’t afford another one,” Korpinen said. “I can’t help you, you need to call your bank,” the airline employee replied.

After calling her bank and finding out they had a two hour transaction wait time with t-minus two hours till takeoff, Korpinen started to have a meltdown.

“I finally found a different credit card at the bottom of my bag, I was able to pay for a fourth ticket, but I was bawling my eyes out and the manager had to come and help me,” she said. 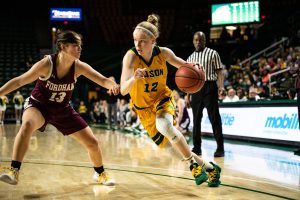 After this whole fiasco, Korpinen made it back safely to her hometown of Turku, Finland.

The Finland native has come a long way since her early days at Mason. Enrolling at Mason as a Biology major and later switching to Kinesiology, Korpinen found her passion for human anatomy and the medical field. “I want to work with athletes — I really liked the whole idea of human performance and improving human performance,” she said.

At the same time, Korpinen was learning what it was like to be a collegiate athlete through her teammate and UConn transfer Natalie Butler.

“Having Natalie as a teammate, I think she has been definitely one of the more impactful players that I’ve ever played with,” Korpinen said. “Seeing her work ethic, the level of commitment and level of play that she played at definitely changed me.”

She continued, “Getting to talk to her and like pick her brain about why she’s doing the things she does. Why is she eating this, why does her schedule look like this and the whole idea of what it looks like to be an athlete. I don’t think I’ve ever had a role model like that before. I honestly don’t think she knows how much she impacted me, but I’m very grateful for having that opportunity.”

“There was so much hype going on — game after game we were breaking record upon record,” Korpinen said. “Knowing that we were playing at a high level, knowing that we were making history, and I was a freshman and I didn’t really know what was always going on.”

Many broken program records later, Korpinen and the women’s basketball team headed to the WNIT for the first time since 2004. They defeated Stephen F. Austin in the first round at home, and faced Virginia Tech in the second round on the road.

“I remember the Virginia Tech game,” Korpinen said. “I was so nervous. I was like ‘Oh my gosh, this is like the big game,’ and I remember shooting a layup and my hands were shaking so much.” 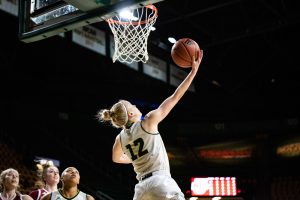 Despite eventually falling to VT in the WNIT, Mason had won its first ever postseason game in program history.

Korpinen has much to be proud of, looking back on her career at Mason. But she didn’t anticipate that her career could get any crazier after that.

That was, until the COVID-19 pandemic hit.

After flying home for the summer and returning to campus in the fall for the 2020-2021 season, Korpinen had to adjust to a completely new student-athlete lifestyle.

“Everything’s different,” Korpinen said. “It’s definitely been the hardest year of basketball that I’ve ever played. It’s not necessarily the weekly or daily activities, it’s the unknown.”

She continued, “Literally your schedule can change at any time. Everything flip-flops every single day. So it definitely takes a mental toll on everybody. No time to hang out in the locker room. I mean we live in dorms together, but it’s just a very different vibe.”

Korpinen’s senior season also has given her an opportunity to reflect on how she has changed over the last four years.

She continued, “I have to thank coach Dunn, because I don’t think I would ever be here — I would never be here without him, he was the one who recruited me. It’s almost a miracle that I ended up with a D-I one scholarship, but he was there from day one, and I remember before the first home game that he texted me ‘Do you want to shoot before the game?’ I was like, ‘Hmm, yeah, let me shoot before the game.’ And then I’ve had a workout before every single home game ever since then.” 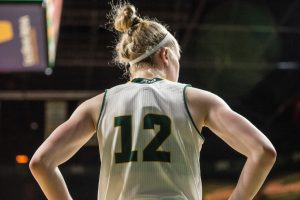 Last year, head coach Nyla Milleson said that it was Korpinen’s work ethic that made her stand out. “From the minute she walked on campus — I mean, she’s the one that’s just going above and beyond. You’re never going to be very good if you’re a nine-to-five player and she certainly is not.”

Korpinen also described what it’s been like to step up as the leader for this team during her senior year.

“It’s always been my role … to be like the hardest worker and set the tone, but then going into this season and having to be the one who actually speaks in huddles — there was one practice where I was like, ‘Guys, I honestly don’t know what I’m supposed to say,’” she said.

She continued, “I eventually found the confidence in myself, like, ‘Okay, I have a good group of people who are looking up to me, and I have to figure out a way to get them to listen and how to make them feel like they have confidence [in themselves].’”

Milleson added, “Her willingness to do whatever it is going to take to be better and then with all of our players we’ve been recruiting, she’s just such a great person.”

Korpinen hasn’t decided what the future holds for her. She is considering anything from working on a master’s degree in Exercise, Fitness, and Health Promotion to playing professionally overseas.

She knows one thing for certain. “I’ll always remember my four years here, for sure,” Korpinen said. “They have been the best four years of my life.”

Even though Korpinen’s career might be coming to a close, the story of her time at Mason will be remembered for years to come.