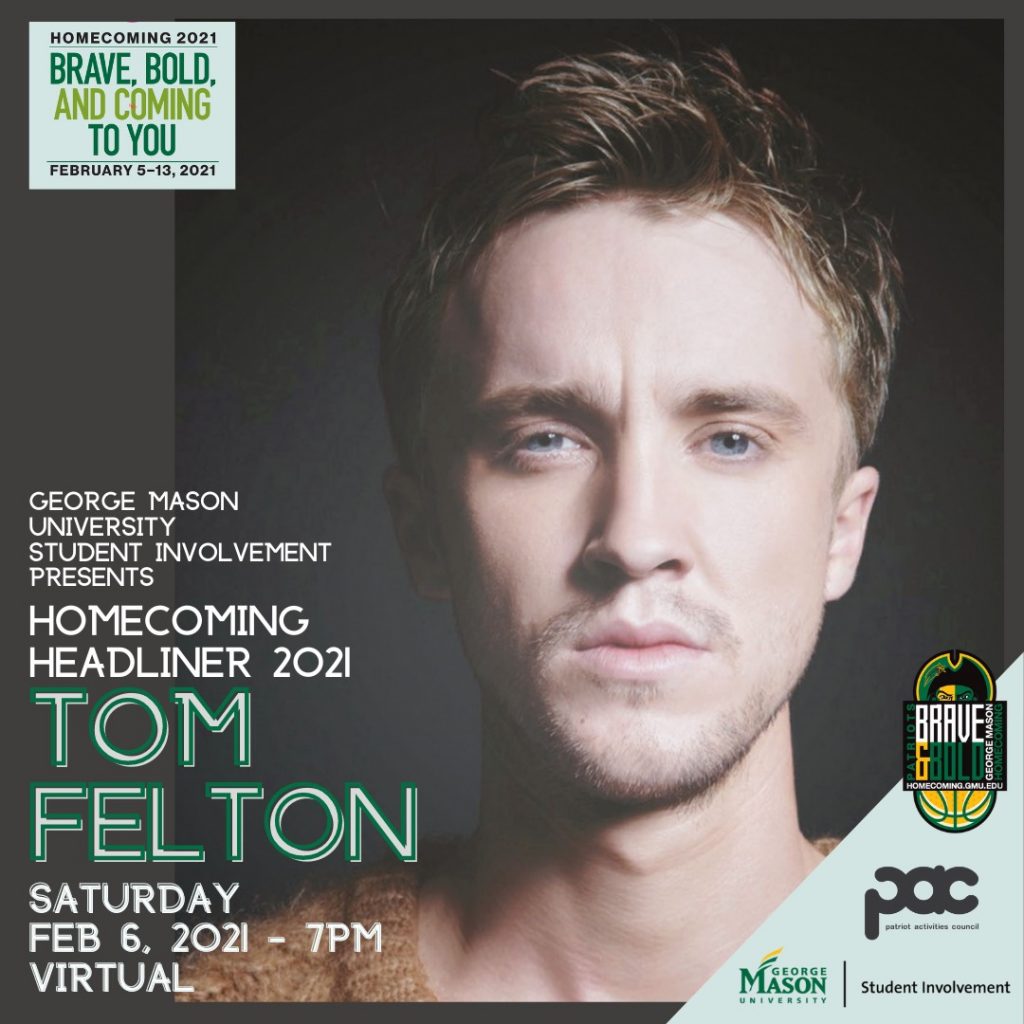 Echoes of “Pottah” could be heard on the YouTube livestream that hosted Tom Felton on Saturday, Feb 6. The actor, best-known for his role as Draco Malfoy in the “Harry Potter” franchise, headlined Mason’s 2021 homecoming events.

The event was hosted by the Patriot Activities Council and had over 500 viewers for the duration of the broadcast. People wrote away in the comments, asking questions about “Harry Potter,” writing how much they loved Felton and wondering how he felt about “DracoTok” — a phenomenon where TikTok creators make videos about Felton’s (in)famous character.

However, not everyone in the chat had their mind on Felton — some felt that J.K. Rowling’s allegations of transphobia should be addressed.

Felton, however, didn’t touch on the allegations and instead answered a list of pre-approved questions from the hosts, Mason students Anisa Ostad and Lindsay Flynn, as well as Hope Miller, the associate director of programming for Student Involvement.

Felton’s mother was also in attendance, according to the actor. He said a heartfelt “Hi mom” a few times throughout the event, and mentioned that it was his first time participating in a livestream.

When asked if he was sick of getting questions about “Harry Potter,” Felton explained that it is something he never gets tired of hearing about.

“I’ll be proud of that for the rest of my life,” he said.

The actor, who most recently starred in the film “The Forgotten Battle,” said that he is nothing like his “Harry Potter” character, something that was evident through Felton’s numerous giggles and other niceties, such as calling people “my love” and being generally good-natured throughout the event. Felton did say, however, that he is a Slytherin.

After getting through some questions, Felton judged two contests — though he maintained that all competitors in both challenges had made it hard for him to choose a winner.

First, a “Pottah” challenge. Donning their best British accents, contestants were made to say “Pottah” in the same manner as Malfoy. He eventually chose a winner: Mason student Alexia Taboada.

The other challenge of the night was a Quiplash-inspired game, where participants were tasked with responding to a prompt with the wittiest answer possible. Mason student Sheila Pham eventually won the contest by answering the question, “What was really hiding in the Chamber of Secrets?” with “Voldemort’s nose.”

When he wasn’t the center of the conversation, Felton turned to those he could see on screen. He made an effort to ask about how the moderators and participants were doing during the pandemic.

“I can only imagine that the culture of university, or the culture of school, has just changed so much,” Felton said. “And clearly there is a massively cohesive, new digital thing happening. I just wanted to know how you guys have been adapting and if things have been really difficult — like I really miss hugging.”

He continued, “I don’t know why, but [I’ve] missed a cuddle. You can’t cuddle anyone. But also [there’s] possibly new ways of connecting with each other and that you may have overlooked before.”

When he found out about Mason’s beloved Starship robots, he could not contain his shock.

“Are you living on the moon?” he asked.

When it came time for the grand finale of the event, viewers were excited, sounding off in the livestream chat about what they were about to see: Tom Felton performing an improvised song on the ukulele.

“I really feel like being a musician has nothing to do with you actually be able to play a musical instrument, as long as you sort of get that same emotion … that’s drawn through music, whether it makes your hair stand on the back of your neck, or it makes you smile or makes you want to run faster, or whatever it is,” he said of his musical talents and what they meant to him. “That’s the most gripping thing that I think I’ve probably ever experienced. And it’s consistent. It never lets me down.”

Felton’s final words of advice for students came from something his mom always told him: “Just keep swimming,” he said. “Trust me, the water gets warmer.”

SEN. KAINE: MY PRIORITIES IN THE NEW CONGRESS