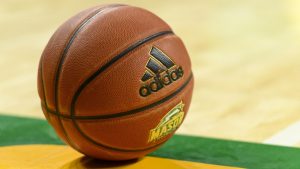 On Dec. 2, Mason men’s basketball announced that they were temporarily pausing activities after a positive COVID-19 test in the program.

Before announcing their pause, basketball insider Jon Rothstein announced that the game between La Salle and Howard had been canceled due to COVID-19 concerns.

Howard was one of Mason’s opponents in the recent DC Paradise Jam, along with Queens NC and Belmont. However, Howard was the only program of those three to take any action in relation to COVID-19 by postponing their game against La Salle.

In the timeline of events, Howard may have transmitted COVID-19 during their game last Saturday. According to University of Maryland head coach Mark Turgeon, “The individual who tested positive at George Mason doesn’t know how they got COVID. They live alone in their apartment and go to practice, that’s it.”

The Patriots were set to take on the Terrapins in College Park on Friday, but that game was cancelled immediately due to the positive test.

Mason was scheduled to play Morgan State on Dec. 8 and participate in an multi-team event against JMU and ODU, but that was also canceled on Friday.

Men’s basketball’s next scheduled game is Dec. 16 at 7 p.m. against Coppin State.

FROM THE MILWAUKEE BUCKS BEAT TO MAKING OREO TRUFFLES