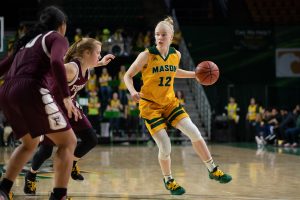 Women’s basketball is looking to bounce back after a difficult 9-21 season in which the team finished 13th in the conference with a record of 3-13.

Despite all of the circumstances surrounding this season, Head coach Nyla Milleson is simply excited that the team will get to play.

“I know what this team has been through,” Milleson said. “Not only the frustration from last year, and so anxious and hungry to get back on the floor and then that was taken away from us. But the work they put in this summer, [it’s just] a different type of work.”

She added, “Every year brings something a little bit different. And I think somebody said the other day I think we’ve lost 60 percent of our scoring from last year. So that challenge of putting people in, in different roles, the challenge of getting people to maybe play a little bit different than what they’re used to — that’s what coaching is all about is trying to put people in the best places for them to be successful in order for your team to be successful.”

Milleson noted that Taylor Jameson will have to play significant minutes as a freshman point guard.

Rachel Balzer, who redshirted last season, will also be playing in the green and gold for the first time.

The team also welcomes back three players who all had standout moments last season and will need to step up this season.

Guard Marika Korpinen averaged 5.9 points, 2.1 rebounds and 1.7 assists per game and was a consistent presence on the defensive end. Forward Camarie Gatling averaged 8.1 points, 5.2 rebounds and 0.7 blocks per game, but was at times limited by a knee injury and fouls.

Forward Tamia Lawhorne averaged 5.1 points and 2.6 rebounds as a freshman, though she scored in double figures four times.

Milleson has several goals for the team this season. First, she hopes the team can “celebrate the success of others” and share the basketball in order to develop more than one or two scorers.

She also hopes the team will maintain a high level of energy on the defensive end of the floor and develop chemistry on the court.

Mason was picked to finish last in the A-10, but there are still many games to play this season.

The shortened non-conference schedule features two games against Power Five schools, Pittsburgh and Ole Miss, as well as several local matchups. Two matchups to keep an on are against JMU, who was picked to win the CAA, on Dec. 6 and Georgetown on Dec. 13.

The team wraps up non-conference play on Dec. 21 against Delaware State and gets a long break before conference play starts on Jan. 1 with a matchup against Fordham.

Women’s basketball starts their season at Pittsburgh at noon on Nov. 25.