After more than a decade of playoff failures, Clayton Kershaw cements his legacy as an all-time great with a World Series championship

In 2019, after the Washington Nationals defeated the Los Angeles Dodgers in the National League Division Series, the talking heads on ESPN’s “First Take” shared a similar sentiment: “Clayton Kershaw is one of the greatest pitchers in MLB history … during the regular season.”

Fans of both teams remember the moment vividly. Kershaw entered the winner-take-all game five in relief of starter Walker Buehler who had held the Nats to one run on four hits.

Kershaw’s inability to pitch well in the postseason has clouded his legacy. On the surface, his numbers don’t seem overly egregious: a 4.19 ERA, 1.10 WHIP and 13-12 record.

While those numbers certainly don’t stand up to Kershaw’s standards, the reason he gets so much scrutiny is that he has blown up in some of the highest leverage spots in which he has pitched.

But the magic of October is that it only takes one great week to change the narrative.

In the 2020 World Series, Kershaw started games one and five. He was credited with the win in both games after throwing a combined 11.2 IP, allowing seven hits, three earned runs and punching out 14.

Those numbers would still be there whether or not the Dodgers won this year’s World Series. The Dodgers could have lost the series 4-2 even with Kershaw’s elite numbers, yet his public perception might not have changed much.

The unfortunate reality is that athletes are often judged on their number of championships, which are so random due to the small sample size of playoff series. One play can be the difference between being crowned a hero and a World Champion or a choker who can’t get the job done under pressure.

This is exaggerated in the MLB because baseball is a much more variant sport than other popular sports, like football or basketball.

RJ Bell of FOX Sports Radio described the stark contrast between the sports in this way: In a context-neutral situation, what is the most dramatic swing of points possible in a baseball game? Imagine the bases are loaded with two outs and a two-strike count, and the umpire calls a borderline pitch a ball. The next pitch gets sent out for a grand slam. That’s four runs instead of zero.

In 2020, an average of 9.3 runs were scored per game in the MLB and 43 percent of an entire game’s worth of runs could be scored or avoided based on one or two plays. 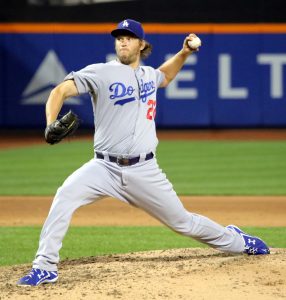 On the other hand, what’s the most dramatic swing of points possible in a basketball game? On a three-point attempt, the ball enters the rim, swirls around a few times, and pops out. That is zero points instead of three. In 2020, an average of 224 points were scored per game in the NBA. That’s only 1.3 percent of a game’s total points decided on one play.

It is also worth talking about how star players in other sports have not faced the same level of scrutiny as Kershaw has because they won a championship earlier on in their careers.

For example, let’s draw a comparison to the NFL.

Green Bay Packers quarterback Aaron Rodgers is an eight-time pro bowler and earned a spot on the NFL’s 2010s all-decade team. He is also a Super Bowl champion after he and the Packers defeated the Pittsburgh Steelers in Super Bowl 45.

But what if the Packers lost that game? The final score was 31-25, and the lead changed hands multiple times in the fourth quarter.

If the result of that game is reversed, Rodgers has zero Super Bowl wins, one Super Bowl appearance, and a .500 playoff record for his career. Rodgers would still be a first-ballot Hall of Famer without the Super Bowl win, but would he still be considered one of the greatest quarterbacks of all time?

With a sports-viewing public that tends to base its opinions on results and not the larger body of work, it is unfair that athletes’ legacies are judged in the way that they are. But now that Kershaw — after 13 seasons in the MLB — got his desired result, his legacy of being an all-time great should follow.

In game five of this year’s World Series, Kershaw passed Justin Verlander to become the all-time leader in postseason strikeouts (207). Kershaw is tied for fourth all time in playoff games started (30) and is sixth in innings pitched (189.0).

Incredibly enough, that wasn’t Kershaw’s best season. For his efforts during his historic 2014 campaign, Kershaw won the MVP award, something only one other starting pitcher has done since 1987.

Excluding his rookie year, Kershaw’s worst season as a professional was an injury-plagued 2018 season that limited him to 161 innings, a 2.73 ERA and an 8.6 K/9.

There was no doubt whether or not Kershaw was going to make the Hall of Fame. His World Series championship did not significantly affect his chances of going to Cooperstown.

But this championship should grant him a seat at the table of being one of the greatest baseball players to ever toe the rubber.