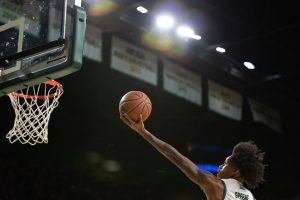 Schedule includes schools in a 90-minute radius and a tournament in D.C.

On Thursday, The Washington Post published an article detailing how college basketball scheduling has been a “mess” and how coaches around the NCAA are dealing with the changes.

Within this article, Mason men’s basketball head coach Dave Paulsen was quoted highlighting the potential schedule for the 2020-2021 season and the difficulty of putting it together.

“It’s been a zoo, you know,”  Paulsen said to the Post. “Pretty much every contract we had was blown up,” including “the four or five games scheduled prior to” Nov. 25, and then “other games involving leagues refraining from non-conference entanglements, and then teams with travel issues.”

“Every game on our schedule was thrown out,” Paulsen said, “and so we just [have to] try to start from scratch in a very short period of time.”

This is what Paulsen has in mind currently — Mason will have 18 Atlantic 10 games and an additional nine non-conference games, all in the Washington, Maryland and Virginia area.

The team will “stay in our geographic footprint,” he said, and “minimize our chances of having a virus outbreak … The farthest I think we’re going to go will be an hour and a half from campus. We’re not getting on a plane — playing some local rivalries.”

This will most likely be Mason’s Thanksgiving tournament, the Paradise Jam, as it moved from the Virgin Islands to Washington, D.C., set to take place Nov. 26-28. 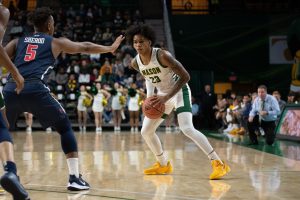 The first three games of the season will be some order of Howard, UMBC and Northeastern.

The remaining six games of the non-conference schedule will include a combination of regional foes such as Delaware, Georgetown, JMU, Longwood, Mount St. Mary’s, Towson, UMD, UMES, UVA and William & Mary.

Currently, UMD has been the only confirmed game, slated for Dec. 4 at the Xfinity Center in College Park.

Based on what Paulsen said about distance — a 90-minute radius — that leaves the following colleges as possible away games.

In or around the 90-minute radius:

Near the 90-minute radius:

That being said, based on schedule trends, other likely home games could include: Mount St. Mary’s, Towson, Longwood or JMU.

Dating back to the 2015-2016 season, Paulsen’s first season as head coach, Mason has played:

Editor’s Note: This is a developing story. There will be an updated article with a finalized schedule as when it is made available to Fourth Estate.