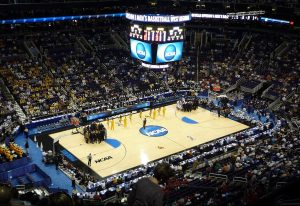 The Atlantic Coast Conference just proposed one of the worst ideas of 2020. On Sept. 9, the ACC head coaches unanimously approved a proposal for the NCAA tournament to expand to over 350 teams. That’s right, over 350 teams. Now I’m not a bracketologist, but the bracket for such a monstrosity would be insane.

Let me tell you something: The NCAA would never go for such a plan and basketball fans would hate it. Just think about the logistical nightmare of coordinating over 350 teams, each comprising at least 20 to 30 plus members.

What is the NCAA going to do?

Quarantine and test over 8,000 players, coaches and staff daily? Absolutely not.

Normal basketball fans also know the tournament as a three-week battle between the best teams in Division I basketball.

A tournament with over 350 teams competing would probably last closer to five weeks and I don’t think anyone could stand watching basketball that long. ESPN’s bracketologist Joe Lunardi said, “The basic math dictates that 166 teams receive opening-round byes. The remaining 180 would play 90 additional games to create a symmetrical field of 256 teams, followed by a tidy eight-round gauntlet through the Final Four.”

Talk about droning on forever. Oh my.

This plan would also come at a cost — a cost at least five times larger due to the fivefold increase in the number of teams. This would not include any testing or quarantining costs, ranging from tens of millions to hundreds of millions of dollars. It should be noted that the NCAA already lost $300 million from the cancellation of last year’s tournament.

Another reason why this plan would be a terrible idea is that, in the words of Lunardi, “The NCAA tournament isn’t an exhibition. It isn’t charity. It is an earned opportunity to compete for a national championship.”

NCAA March Madness content creator Andy Katz said on Twitter that if the NCAA expanded the size of the tournament, it would “devalue the regular season.” This is absolutely true: Regular television contracts would be worthless, and any strength in non-conference schedules would have no impact on the ultimate end goal of a championship.

Katz also added that the money for schools from the NCAA tournament would not be the same. In a normal tournament, each team that receives or wins a bid and advances receives a share of the pot. If every D-I school received a bid, then those shares would be reduced to almost nothing.

Lastly, due to Title IX, anything the NCAA does for the men’s tournament must be done for the women’s tournament. So imagine the NCAA forking out hundreds of millions or even billions of dollars to send over 700 teams to the tournament.

And in the current pandemic, why in the world would anyone want more people with you? I’m sure athletics departments from around the country would be much more comfortable with a smaller tournament to limit the exposure to COVID-19.

Dave Gavitt, the NCAA’s senior vice president for basketball, squashed any chance of the ACC plan in a statement issued Thursday.

“Every college basketball team’s goal is to play in the NCAA tournament because everyone loves March Madness,” Gavitt’s statement said. “Certainly we missed it this year and can’t wait for 2021. While all who care about the game are entitled to their opinion, and we’ll always listen respectfully, at this time we are not working on any contingency plan that involves expanding the tournament field.”

The NCAA plans to vote this week on a Nov. 25 start date, but I do not believe even that will be viable as the Pac-12 Conference has already canceled all sports for the year 2020.

Gavitt has also announced that the NCAA plans to possibly utilize the bubble format for this year’s NCAA tournament, if necessary. “We’ll be flexible,” Gavitt said in an interview with Katz. “We’ll be nimble and we’ll deliver what the country is desperately looking for again and that’s just an incredible March Madness tournament in 2021.”

So let’s focus on starting basketball again before we put the cart before the horse and screw up the entire 2020-2021 NCAA basketball season. The last thing we need is another tournament cancellation.