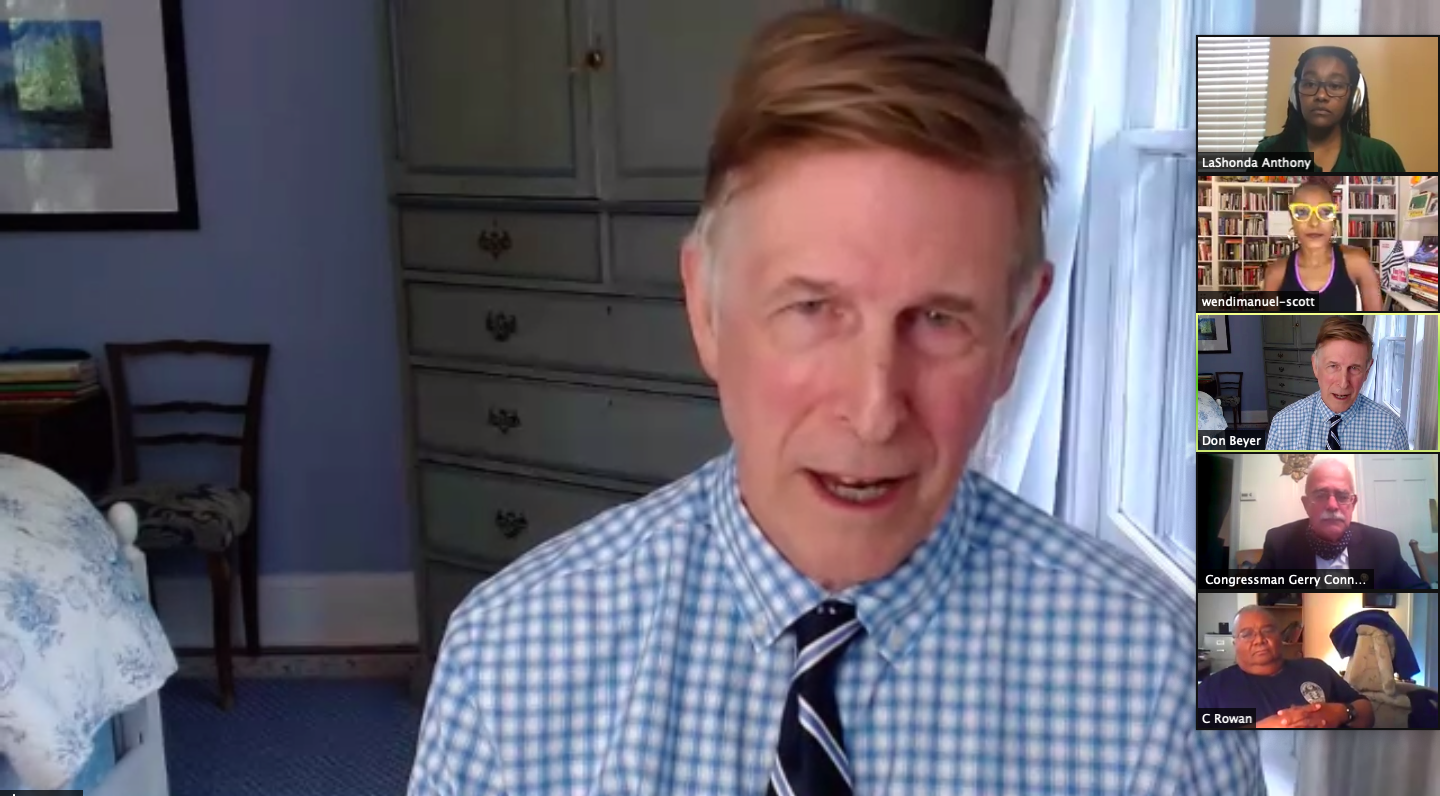 On Friday, June 19, a panel of influential members of Mason faculty and lawmakers in Northern Virginia held an open forum with the Mason community on Zoom to discuss, among other things, diversity and policing concerns on campus.

The meeting took place on Juneteenth, which saw nationwide protests continue in association with the death of Black people at the hands of police officers.

The evening was co-moderated by School of Integrative Studies Associate Professor Wendi Manuel-Scott and LaShonda Anthony, the director for Academic Integrity and Initiatives in University Life.

Panelists, including Interim President Anne Holton and Mason Chief of Police Carl Rowan, discussed issues raised by students and faculty like the over-policing of Black student events and the struggle to retain exceptional, diverse faculty at Mason.

“When officers come out of the academy, they are taught that little things lead to big things,” Rowan said. “And if they make a traffic stop for tags that are out of date or a headlight or something else, they can often, in the interaction, discover drugs or guns or whatever.”

On the call, Rowan spoke about an instance he observed while reviewing body camera footage from an interaction where Mason students were subjected to a consent search for over 40 minutes because the officers “smelled weed.”

“I thought the optics of that were just ridiculous,” he said. “We have a lot of students who work one or two jobs in addition to being students at Mason. They’re at the library studying late. The last thing they need is to be sitting on a curb while their car is being searched for the possibility that there is some small amount of weed in it.”

Rowan also discussed the lack of awareness that students have concerning their right to deny consent for a search.

“Most of those searches are called consent searchers,” he said. “[The officers] have asked if they can search the car and talked the person into giving them consent. When I see a lot of that, it makes me believe the people being stopped don’t really understand that they have the right to say no.”

In order to combat this issue, Rowan has officers from Mason PD hand students a piece of paper detailing their specific rights in the situation and banned intrusive searches involving marijuanna.

However, Holton did address the safety concerns associated with confronting police officers.

“I think, sadly, as we’ve seen from Rayshard Brooks’ case in Atlanta, recently, a 40 minute, long, very calm, respectful interchange from Mr. Brooks with those police officers ended up with him dead. So, I do think that folks have to be careful how you interact with law enforcement, sadly, in this day and age, and that’s maybe true for everybody, but absolutely especially for Black men and women.”

Another one of the major topics brought up in Friday’s discussion was the efforts of the university to increase and retain faculty from diverse backgrounds at Mason.

“Hiring more diverse faculty is part of our challenge and the other is attracting faculty from diverse backgrounds and then retaining them,” Holton said. “Sadly, we do a lot of attracting great people and then not paying them well enough, and I will tell you that that’s an issue across the university.”

Holton cited lack of state support and the relatively low cost of tuition at Mason as major contributors to the challenge of retaining high-achieving faculty. She also noted that one of the goals of the tuition increase for the 2020-21 school year is to support faculty.

“I don’t know that I have all the answers until we figure out how to get this financial picture to where it needs to be,” she said.

She also the addressed the racial income gap in America and the challenges that faculty from non-white backgrounds may have to face.

In addition to Holton and Rowan, Democratic Congressmen Gerry Connolly and Don Beyer participated in the Zoom meeting along with James Walkinshaw, a member of the Board of Supervisors representing the Braddock District.

The lawmakers spoke about the history of systemic racism in Virginia, provided some of their ideas about fundamentally restructuring policing in America and informed the audience about how they’re working to uplift and support diverse voices.

Rep. Connolly spoke about Juneteenth and the near-instant snapback of white supremacy during the 19th century, taking the form of Jim Crow and the Ku Klux Klan.

“There was enormous jubilation recorded [on Juneteenth] but one year later, Black code laws were adopted throughout the South, including right there in Galveston almost virtually re-enslaving people,” he said.

Connolly continued, “Our history tells us that we can never declare victory [over racism]. We have always got to be vigilant. We have got to look in the mirror and admit that as a country, as a society, that racism is stubborn, resilient, embedded and has to be [uprooted] and that includes our law enforcement.”

Rep. Beyer spoke about the history of segregation in Virginia, specifically the resistance to integrate schools in the mid 20th century. Building off Connolly’s comments, he said, “You can have racism without racists. You can have things that are deeply built into our economy.”

Beyer also expressed his support for the Justice and Policing Act, introduced to the House of Representatives on June 8.

“It will ban chokeholds,” he said. “It will make lynching a federal crime for the first time. It will get rid of qualified immunity for police officers so we can hold them accountable for the bad stuff that they do.”

The law will also create a national database for police misconduct and require law enforcement officers to wear body cameras.

“It’s gonna be a good vote, we have to get it through the Senate which is harder,” he said. “And let’s face it: we have a racist president. We have a president that says there are good people on both sides. We have a president that wants to go to Tulsa — we know what happened in Tulsa — on Juneteenth for a rally then postpones it for a day because there’s an outcry. We’re going to have to fight back really, really hard.”

“The events of the last few weeks have reminded us of how much we need to reflect on where we are and where we need to be,” Holton said.

“Many of us who have been working on racial justice issues all our lives want to feel like we’ve accomplished something,” Holton said.

She continued, “We want to feel like the things that we’ve done have gotten us somewhere and yet newer generations are reminding us that, well, all those accomplishments don’t amount to a hill of beans if we aren’t where we need to be now.”