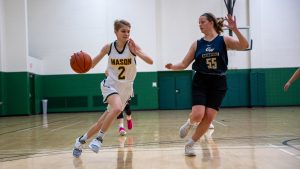 Mason’s club sports programs’ seasons came to a halt Friday, March 13, when the university sent out an email that stated all events would be canceled through April 10 and that student organizations, teams and clubs were prohibited from domestic travel moving forward.

Assistant Director of Competitive Sports & Athletic Training Paul Bazzano said in a statement to Fourth Estate, “The club sports program has been drastically affected by COVID-19. We had several clubs that had qualified for regional and national championship events, which have since been canceled. Ultimately the health and safety of our student athletes is our number one priority. Please feel free to contact Chris Sato or I with any additional questions.”

One team that qualified for their sports national championship was men’s ice hockey, which will transition to be a Division I program next fall.

While field hockey may not be a fall sport, the team is still impacted. The team posted  a statement on March 13, via their Instagram account, that noted that they would not be able finish their spring season, including their annual Spring Tournament.

Club baseball posted on Twitter, saying, “So as many other teams are having to do around the country, we are unfortunately having to cut our season short due to George Mason University’s precautions for COVID-19. The season was looking promising, but I know we’ll be back stronger next year!”

Unlike NCAA athletes, club sports athletes won’t have the ability to extend their college careers and many seniors played their last game without knowing it.

According to the University Life website, all games for club sports both home and away are canceled for the remainder of the semester. Teams who have planned travel need to communicate with visiting teams and event organizers. Additionally, club officers are responsible for cancelling all travel reservations and providing refunds when possible.

As of March 17, the University Life website states that “Intramural sports activities have been canceled for the remainder of the Spring 2020 semester.” 11v11 Soccer and 4v4 Flag Football leagues had been rescheduled to start the week of April 13, if the university had resumed normal operations.

Additionally, the Super Smash Brothers Tournament, 3v3 Basketball Tournament and Kickball Tournament have been postponed but the website did not provide any further information.

The website states, “The department will continue to monitor the situation and communicate with various offices on-campus to make informed decisions regarding the health and safety of our students and staff.”

Online Classes and the Mason Community