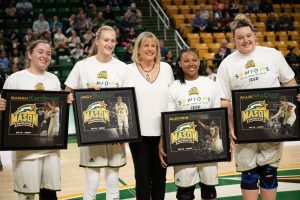 Women’s basketball fought back from a nine-point deficit and found themselves within one with under a minute to play.

However, after a couple of missed shots and turnovers, Mason would eventually fall 64-59 in front of more than 1,000 fans.

Bolton had eight points, eight rebounds, one steal and one assist. She teared up during the press conference reflecting on what she thought was the best part of her career at Mason, “The people,” she said. Bolton added, “Flowers and teddy bears from the best fans, through thick and thin.”

Head coach Nyla Milleson announced during the press conference that Bolton would be returning to the team next year as a graduate assistant, joining Casey Davis as former players on the staff.

However, Milleson has been most proud of what Grate has accomplished off the court. “I kind of laugh when I talk about school with Lex because school is not her favorite thing. But she’s graduating on the Dean’s List in May, she already has a job lined up,” Milleson said, holding back tears.

In July, Grate will be attending the Fairfax County Police Academy.

“It’s been a great four years, my story didn’t turn out how I envisioned it when I was 17 years old but I’ve definitely grown as a player in other ways,” Grate said. “I mean, I’ve enjoyed every single second of it, I’ve battled injury after injury, but I managed to stay strong and fight through. And I love Mason Nation.”

Sarah Kaminski holds the record for most career games started and is third in the program in made threes. While she didn’t score against La Salle, she played a key role on the defensive end and had three rebounds and two assists.

Milleson joked that, “Sarah might be the next president of the country, who knows,” bringing some humor to the somber press conference.

McCool scored the team’s first five points, including the fourth three-pointer of her career, a play that caused the arena to erupt.

Though this was just the seventh start of her career, McCool has left a lasting impact on the program and has already lined up a teaching position.

One of the things Milleson was most proud of in her seniors was that two of them, Bolton and Kaminski, were Provost Scholars and all four were graduating on the Dean’s List, something she noted not many programs are able to say.

“They had a chance to be the winningest class in school history with just a few more wins, and for them not to reach their basketball goals with all the other things that we’ve reached,” Milleson said to wrap up the press conference. “It’s just been really hard to watch as the season continues to progress. But I can also tell you they didn’t quit on me. And that says a lot about their character.”

While this regular season may not have gone the way Milleson and her seniors may have hoped, the Atlantic 10 Tournament remains. Even after the seniors play their final minutes all four will continue to succeed in whatever their future holds.