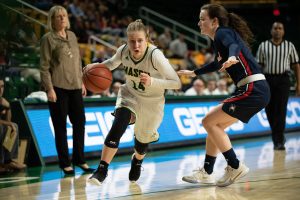 On Feb. 19, the women’s basketball fell to 2-11 in conference play and 8-18 after a crushing 75-70 loss to the University of Richmond. While Mason had chances to win it in the final seconds, the team missed several shots.

“Our kids battled. First, we had a couple of stretches [where] we really dug ourselves a hole. But I’m proud of our efforts, and we couldn’t have asked for a better opportunity than we have here at the end,” Milleson said to open the press conference.

Four players scored in double digits, but that failed to solve every problem

At times this season, the team has struggled to score and has looked like they were one more contributor away from winning. However, three upperclassmen — Cardaño-Hillary, Jacy Bolton and Marika Korpinen — all scored in the double digits. Freshman Jordan Wakefield also added 12 points.

However, because of the hole the team dug themselves into, four double-digit scorers were not enough.

Having both numerous contributors as well as not having to dig themselves out of a hole might be the magic formula for this team, but it’s not something that has been done multiple times this season.

Jordan Wakefield had a breakout game

Wakefield’s 12 points in 16 minutes was a career-high. She also added six rebounds and a block.

“Jordan played her best game in a patriot uniform,” Milleson said about her after the game.

She later added, “It was Jordan’s night tonight to be able to step on the floor and that’s the Jordan we saw this summer before she got sick, and we’re just going to keep encouraging her.”

Coming into Wednesday’s game Wakefield had hit two threes all season, and she hit two against the Spiders.

After the game, Wakefield said, “In practice, my teammates definitely help me. They always say, even when I miss it, they’re definitely like, ‘keep shooting, keep shooting, you’re a shooter.’”

Moving forward, not just in this season but into next year as well, this game will be remembered as Wakefield’s breakout game. It proved that she can do it and she will need to moving forward.

Mason battled back from not one but two double-digit deficits in this game, something that is nearly unfathomable.

“I thought we showed a lot of fight, a lot of battles in us,” said Milleson. She later stated that this came from the will of the players, and noted a timeout where the players led themselves and she did not have to say much.

Milleson repeated the line “We’re better than this record shows” twice in a row during her press conference for emphasis, something demonstrated by the willpower of the team and the fact that the team continued to battle even when their chance at victory grew slimmer and slimmer.

She hopes that this game will serve as a turning point for the team, whether it sparks a run in the next few games or motivates the team next season.

The Patriots head on a two-game road trip before returning home for Senior Night on Feb. 29, when the team takes on La Salle at 2 p.m.