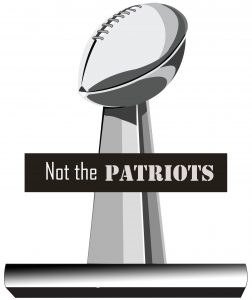 We all saw the jokes and memes about the Patriots not being in the Super Bowl and fans being sad about it.

But it was weird not watching the Patriots in the Super Bowl.

Super Bowl 50 in 2016 was the last Super Bowl I was at home with my parents and brothers before I went off to college. Now, four years later, I had to figure out how to watch the big game, without the Patriots and without my family.

Spoiler alert: I ended up wearing my boyfriend’s high school sweatshirt and pajamas while eating food he cooked instead of nervously watching the pre-game show decked out in my jersey and Patriots sweatshirt, socks and pajama pants.

The Divisional Round and Conference Championships were like watching a sport I wasn’t quite familiar with. I can barely remember a time where the Patriots were not in these later games.

But then came the Super Bowl.

Many things in my life have changed since February 2016 — really more than I can count. Yet every February I could count on my favorite football team playing for a championship.

So yes, all non-Patriot fans I know I’m lucky, but I really don’t cope well with change. And this February was a change from my normal routine. And it was weird.

For the first time in three years, I didn’t spend all week looking forward to the Super Bowl. Instead, I calmly went about my week, getting all my school work done, writing my story last week on Jack Tempchin and going to the Chocolate Lover’s Festival in Fairfax.

In all honesty, I think I was more excited about chocolate than the Super Bowl — it was really good chocolate so I regret nothing.

Not devoting most of my week to watching NFL Network was weird, but I didn’t really notice until after the fact. I’d long since accepted the fact that Tom Brady would not be taking the field on Feb. 2.

From the start of the NFL season, I told my boyfriend that I didn’t want to go to a Super Bowl party because I don’t like them (the only one I’ve been to was for Super Bowl LII with several Philadelphia Eagles fans).

So instead we hung out at his house and for the first time in eight or nine years, I did not watch any pre-game shows. We instead watched “White Collar.” And it was lovely. The world kept on turning and the Patriots weren’t in the Super Bowl.

I was not even sure what channel the Super Bowl was on until 48 hours before. I think I looked up what time the game started a few hours before kickoff. It wasn’t that I didn’t care, it was just that I didn’t have the usual incentive to investigate the information I needed to know really early.

Not being extremely emotionally invested in the game was bizarre, but I am sure my boyfriend and best friend both appreciated me not going into frantic “Patriot Watching Mode” — because I am not an easy person to watch the Super Bowl with.

But it was kind of fun?

Obviously, I’d love to see Tom Brady in every Super Bowl until the end of time, but I enjoyed watching the game without needing to remind myself to breathe. My family group chat was more concerned about my dad’s score pool at work than the specific plays that happened.

I got to not be emotionally crushed or overwhelmingly happy, but instead just felt like I should probably drive home so I could get ready for bed. That part was definitely nice.

So while the Patriots not being in the Super Bowl was different, a bit jarring and not fun in the lead-up, it was okay, I survived. And best of all, the trajectory of my mood for the week was not decided Sunday night as the confetti poured down.

Most importantly I learned that the Super Bowl does go on without the Patriots, and that too can be okay.

But don’t get me wrong, I do want to see Brady and the rest of the team taking the field in Tampa in 2021, but if they don’t I know that the world won’t end and the show will go on.