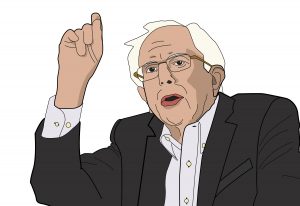 Bernie Sanders was criticized by his former political rival Hillary Clinton in an interview with the Hollywood Reporter, in which she suggested that she witnessed him getting nothing done for years while working in Congress. “Nobody [in congress] likes him,” she argued.

Clinton also criticized his credentials as an outsider candidate: “He was a career politician. It’s all just baloney and I feel so bad that people got sucked into it”.

She then dodged the question of the viability of Sanders’ candidacy, stating, “I’m not going to go there yet … I will say, however, that it’s not only him, it’s the culture around him. It’s his leadership team. It’s his prominent supporters. It’s his online Bernie Bros and their relentless attacks on lots of his competitors, particularly the women”.

Clinton is wrong about Bernie, plain and simple.

Bernie Sanders’ policy agenda includes progressive proposals that have picked up enough steam to be seriously considered by the majority of candidates in the field. Free higher education and student loan cancellation has been taken up by Elizabeth Warren, and medicare for all has been paid extensive lip service by candidates on the campaign trail.

President Donald Trump has joined in on the Bernie craze by commending his electability in a few speeches at his campaign rallies and interviews as well, according to the Intercept. “Bernie is surging. There’s no doubt about it. And Bernie seems to be the one the [Democratic] party wants,” said Trump.

Trump has viewed Sanders as a potential threat for his re-election campaign since 2018 and has noted that he has got “20 percent of Bernie vote” because of his rival’s experience with areas of trade. (Note: this statement is not backed by polling data.) Nonetheless, advisors working for Trump believe that Sanders is beatable.

Furthermore, Sanders’ attitudes have garnered a 57 percent favorability rating among African-American voters and a 50 percent rating among women according to a Morning Consult report.

With Bernie finishing in strong second in Iowa, receiving only .1 percent less of the vote than front-runner Pete Buttigieg, the strong coalition his campaign has built is starting to show results.

In Iowa, and elsewhere, the tension within the party has served only to re-energize Sanders and his loyalists, who have latched onto his campaign in a way that separates him from all the other candidates. According to a study done by the New York Times, while backers of other Democrats often list three or four contenders when asked to name their top choice, Sanders’s fans are unwavering.

As college students, Sanders is asking people like us, who are the country’s next generation of leaders, to trust our gut in this upcoming election. Despite criticism, Sanders is doing well in the campaign and rising above the criticism of his detractors.

Climate Change is an Attack on Health