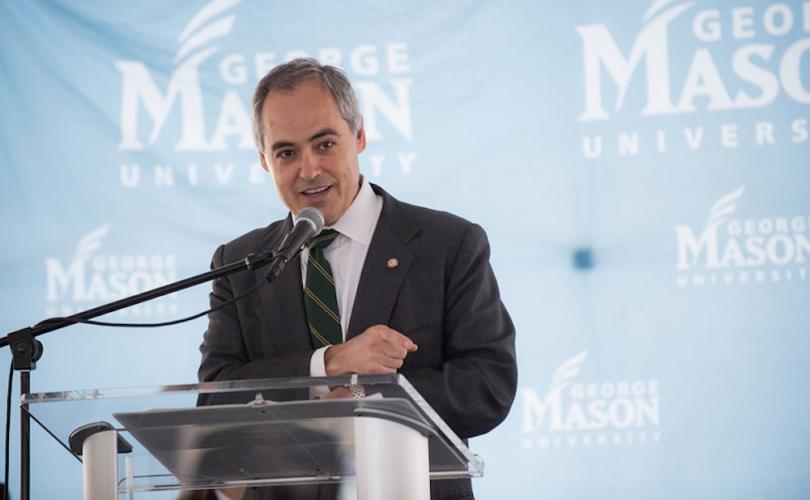 When the university received Angel Cabrera’s farewell email on June 13, 2019, Bethany Letiecq, president of Mason’s chapter of the American Association of University Professors (AAUP) had one thought: “I know this history, it’s going to happen again.”

As the presidential selection process reaches its final stages with no public conversation of finalist candidates, Mason faculty worry they will be shut out of the decision again. However, in a meeting held on Friday, Feb. 7, the Board of Visitors (BOV) voted to allow faculty to participate, in some capacity, in the presidential search process.

Per the Mason faculty handbook, “The search and selection process must include opportunities for the General Faculty to meet with candidates who are finalists for the presidency.”

From records of Mason’s student newspaper, formerly known as Broadside, in 1996 the presidential search was narrowed down to four candidates who were then scheduled to visit campus. Broadside’s Feb. 29, 1996 issue showed that the visits were structured into four sessions: one for students, one for faculty, one for the Mason campus community, and a reception hosted by the Alumni Association. Candidate names were not made public until their visit to campus, however, two of the final candidates names were leaked to the public by a search committee member prior to the scheduled meeting.

In the 2012 hiring of previous university president Angel Cabrera, the requirement for faculty to meet the candidate was not upheld.

In a 2012 faculty senate meeting called specifically to address the handbook violation in Cabrera’s hiring, emeritus faculty member Jim Sanford stated, “If one party, [The Board of Visitors], that is a signatory to the handbook can ignore its provisions, it brings into question the entire contractual nature of the handbook … and also the ramifications regarding the future validity of the handbook as a contractual document.”

According to the recorded meeting minutes, members of the faculty senate who were part of the 2012 presidential search committee and included in the selection process stated that the reason for the lack in transparency was due to the fact that conducting a public selection jeopardizes candidates’ careers. According to reports from Broadside, the 1996 presidential search committee had similar concerns.

“Market realities cause candidates to choose what searches they will be in based on part of the process being used is public or confidential,” former faculty senate member Linda Monson said. “Since the mid-1990s candidates who were presidents, who were sitting presidents who were looking at other presidential opportunities, have had four troublesome impacts on themselves and on their universities.”

Monson continued, “Some have lost their jobs. Some have lost donor funding. Some have lost legislative funding, and many have lost goodwill on their home campus, if indeed, it was made public that they had interviewed elsewhere. It is predictable that almost all of the public and private research universities are now using a confidential process.”

Many faculty senators emphasized their frustration with the private selection. Senators made references to a possible resolution. One unnamed senator said, “I would like to have assurances that this will not happen again, and I’m concerned that by violating the faculty [handbook], what is to stop the Board of Visitors from doing this to the Provost search, with dean’s searches and even chair searches?”

Another senator remarked, “Issues of apologies have been mentioned, but I think that one can say ‘sorry’ at any time and then when it’s later, go back to doing the same things.”

No resolution was passed on the matter. The current presidential search has found itself come under the same questions regarding the faculty handbook as Letiecq and the AAUP argue for an open presidential search, as seen in a previous Fourth Estate article.

Letiecq came to Mason in 2013 and was not present during Cabrera’s hiring. “I actually read up on this a long time ago because faculty had said that Angel Cabrera was an ‘illegal president,’” Letiecq said.

Letiecq said those feelings of resentment stem from the fact that Angel Cabrera was notified that late-stage secrecy went against the faculty handbook and demanded that the process remained confidential if he were to continue with the hiring process.

When a select group of faculty senate members was eventually given the opportunity to meet with the presidential finalist, they were asked to sign non-disclosure agreements that would bind them for the remainder of their lives.

If a president were to be hired in this way again, Letiecq stated that the candidate would be “installed as a president to a university where faculty and students have been demanding for engagement in their hire. I think this actually will set this president up poorly right out the gate to begin a leadership position here, knowingly in violation of our faculty handbook.”

She continued, “How can we have a president or leadership within our university who says they are committed to shared governance, if they won’t even participate in shared governance upon their hiring?”

The presidential search committee released a position description and qualities they will expect from Mason’s eighth university president. Some expectations include: “A highly communicative and transparent leadership style that fosters an environment of trust, excitement, and high morale among faculty, students, staff and the university community.”

Another asks for, “A demonstrated commitment to effective communication and collaborative work with a variety of partners, including faculty, staff, students, alumni, donors and community leaders.”

According to an article from Broadside’s March 7, 1996 issue, the third candidate in the 1996 search, Peggy Elliot, spoke to the importance of these open sessions for both student and candidate saying, “I have to hear you to know what you need.”

After the Mason campus and community had met with each candidate, Alan Merten was announced as the next president. Search committee chair, Anita Taylor, expressed her satisfaction in the decision at the time saying, “We had the most uniformly positive response across campus to this candidate.”

At the presidential search meeting held Friday, Feb. 7, Tamara Harvey, associate professor of the English department, argued the importance of a public search process in regard to the longevity of the president.

“Secret searches are a fairly new phenomenon, and if this trend continues I think we will find the turnover of presidents and provosts will continue to accelerate, because it’s easier for our highest administrators to test the waters,” Harvey said.

Mason has seen a decline in the number of years a president serves the university. George Johnson was president for 17 years, Alan Merten for 16, followed by Angel Cabrera for just 7 years.

Harvey continued her argument, saying, “Which means that we are likely to be having this conversation again and repeatedly unless Mason chooses to become a leader in transparency and openness turning back the tide of the trend that has yet to prove, despite claims to the contrary that secret searches yield better presidents and stronger universities.”

The BOV agreed on Friday, Feb. 7, to allow the campus community participation in the selection, however, it is still unclear what form the participation will take.

The next faculty senate meeting will be held on Feb. 12 at 3 p.m. in Robinson Hall B113 and is set to hold an open conversation with Rector Tom Davis on topics of interest within the faculty community.