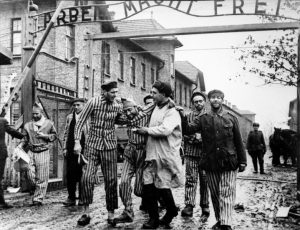 The anniversary of the Auschwitz liberation was remembered by survivors returning to the same grounds on Monday, Jan. 27, that they were liberated from 75 years earlier. This same date is also remembered as the Holocaust Memorial Day.

The anniversary included a march of about 200 survivors from around the globe through the camp gates, as well as a ceremony that world leaders and families of those who perished attended.

By having survivors there, unified and thinking about what took place on the grounds they were walking on over 75 years earlier, it humanized the number of deaths and survivors during the Holocaust by showing the victims — the faces of those who could never forget. Considering the ages of many of the survivors both at the commemoration and at large, it is unlikely that we will ever witness this same act of unity at the next large anniversary date, or even on the 76th anniversary.

I find it particularly interesting that many national news platforms, many of which are placed in Washington, D.C. and within walking distance from the United States Holocaust Memorial Museum, brushed over this anniversary as if it was worth the same amount of attention as the novelty stories for that evening. Amidst the news of Kobe Bryant, an acclaimed NBA player, dying tragically as well as the Senate impeachment trials, the amount of coverage of this event was lackluster at best.

History teachers remind us to study the past, and while we have primary sources of those who are victims available to us, it seems as if we take their words of fear of warning and of grief for granted. The term ”Never Again” is thrown around after each antisemitic attack and when discussing actual genocides occurring around the world today (see China imprisoning Uyghurs).

It is time that words with abstract connotations are put with real discussions, revelations, discoveries and education, and that arguably starts with the media making more of an effort to cover and uncover these stories.

One platform that excels in educating the public of what took place decades ago at Auschwitz is the Auschwitz Memorial on social media platforms. On Twitter alone, they have over 1 million followers and post content daily, ranging from profiles of those who were murdered at Auschwitz to unknown facts about the Holocaust to warnings of behavior that led to the belief system that was at the core of the Holocaust.

Their efforts in educating the public are an important part of preventing similar tragedies from happening (although they already are as we speak). They serve as an underrated example of efforts to hopefully put more focus on a people and on a history and on the future of humanity that is not focused on enough by the media and the public at large. They strive to make sure we notice, and it’s vitally important that we all do.

AGAINST THE HIGH-SPEED RAIL PROSELYTIZERS