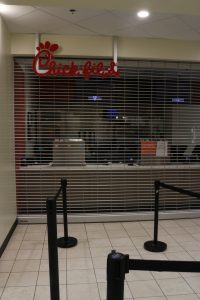 It’s a Friday afternoon, a few hours before my chemistry exam. I am in Fenwick Library, exhausted from hours of studying the previous night. My stomach starts growling, making me hanker for a delectable treat. I immediately feel myself craving a fried chicken sandwich and head over to the Chick-fil-A in SUB 1.

As I order my sandwich and waffle fries, my thoughts are then overridden with guilt. As someone who advocates for LGBTQ+ rights in the U.S., I feel a sense of betrayal that I spent my money at Chick-fil-A, a fast-food chain known for funneling money into organizations known for anti-LGBTQ+ stances. Yet, it was difficult for me to not spend my money on Chick-fil-A: the chicken sandwiches are delicious.

This created a debate in my mind: even if I oppose the political stances of Chick-fil-A, should I continue purchasing their chicken sandwiches?

In order to understand the conservative Christian values of Chick-fil-A, I did research on its history and discovered that it was founded by the late S. Truett Cathy in 1946. Cathy identified himself as a devout Southern Baptist and hoped to instill values of Christianity and family in restaurants he established, including Chick-fil-A. The influence of Cathy’s Christianity on the restaurant played a significant role in defining its purpose to “glorify God by being a faithful steward of all that is entrusted in us.”

Chick-fil-A also has a distinguished reputation of being closed on Sundays, another feature that stems from Cathy’s religious beliefs. By closing on Sundays, Cathy encouraged his employees to take the day off to be with family and participate in religious activities.

Identifying with their Christian values, Chick-fil-A has donated to religious organizations through the Winshape Foundation founded by Cathy and his wife, Jeanette. Through Winshape, Chick-fil-A has donated to Exodus International, the Fellowship of Christian Athletes and the Marriage and Family Foundation. These are organizations that have been flagged by American media for supporting conversion therapy, promoting heterosexual-only marriages and obligating applicants to agree to a statement that “condemns LGBTQ+ for living an impure lifestyle.”

Many times in the past, I have reconsidered purchasing a chicken sandwich from Chick-fil-A because of its political positions.

However, through my research, I do believe that this fast-food chain has turned over a new leaf.

In 2014, Dan Cathy indicated that opposing same-sex marriage was a “mistake” and that the fast-food chain should focus more on customer service rather than politics. Chick-fil-A still became the face of political backlash, and the LGBTQ+ community protested them for funding Christian charitable organizations with anti-LGBTQ+ histories. However, last November, Chick-fil-A announced that they would cease donating to these organizations and instead donate to charities emphasizing on donating to “education, homelessness and hunger.”

Chick-fil-A is caught between left-wing politics and right-wing politics. Chick-fil-A donated to more left-wing groups such as the YWCA and Southern Poverty Law Center, an action criticized by former Arkansas governor Mike Huckabee because it was “surrendering to anti-Christan hate groups.” Yet, if Chick-fil-A resumed donating to organizations known for their anti-LGBTQ history, then they would receive backlash from left-wing Americans.

I have decided that I will still continue to eat from Chick-fil-A because the chicken sandwich is delicious. We often feel sandwiched between politics and food, but we should be able to separate the two.

The Hedonist’s Case for Reading Fiction