You never realize how much your family, your hometown and your culture mean to you until they are no longer a part of your daily life. This is what it is like for junior women’s basketball player Marika Korpinen.

Korpinen hails from Turku, Finland, more than 4,200 miles away from Mason.

This was the start of Korpinen’s basketball journey.

Little did she know she would one day play D-I basketball.

Before coming to the U.S., Korpinen served as captain for Finland’s U16 team. She led her team to a .600 winning percentage and was named the 2014 Baltic Sea Cup Most Valuable Player for her performances.

At the age of 17, Korpinen decided that she wanted to play basketball in the U.S. She packed up her things and planned on spending a year at Long Island Lutheran high school in New York.

The hardest part about going to the U.S. was having to say goodbye to her parents at the airport.

“My mom didn’t realize that when I got to security that we had to say bye,” Korpinen said. “My mom was like, ‘Is it over now? Then she lost it and I was like, ‘Mom you can’t cry, I’m going to cry.’ And then I just cried the whole time and even when I got to the airplane I was still crying. So when I got off like three and a half hours later, I was on the phone. I called my parents I was like, ‘I made through the first flight, I’m okay.’”

However, Korpinen almost did not make it to her connecting flight in Iceland to New York.

“It was my first time flying alone and when I got to Iceland, I was like full-on shaking and panicking, but then I got to security and they asked for all my visa documents. And then the officer looked at my passport and was like, ‘Do you have the documents that your parents are letting you travel?’ and I was like, What? No? They were like ‘Do you have a signature of your parents allowing you to travel?’ Korpinen responded saying, “There is my dad’s signature, on my visa. They were like, ‘One moment.’ And then she went to the back and I’m like, ‘Oh my god what am I going to do? Am I going to be stuck in Iceland?”

The officer returned and let her go, but Korpinen could not have been more nervous. “I was so scared,” she said. “I must have looked more frightened than any rabbit in the headlights of a car. Maybe the officer felt sorry for me.”

That was not the only obstacle for Korpinen, as she was instantly hit with culture shock and felt as if she did not belong.

“I just felt like an outsider,” Korpinen said. “First of all, my host family wasn’t really ready to take me. My coach was struggling to find me a family, so like two weeks before I was supposed to come. My coach found me a family and they kind of just last-minute agreed. So I don’t think they really understood what it’s like to host a kid [from] a foreign country for a year.”

Korpinen continued, “It was pretty rough in New York. I didn’t even eat that much because we ate at 7 o’clock and I’m used to eating dinner at 4 [p.m.]. And I was literally sitting in my room and be like, ‘Okay, do we do the eating thing here?’”

It took Korpinen more than a week to figure out how to even lock the bathroom door.

However, Korpinen said that her biggest problem overestimating herself. “I thought I was more mature than I actually was when I got here. I thought I would be fine,” she said. “But in the end, I didn’t completely understand the language, the culture was completely different, and people act so differently.”

Korpinen eventually took hold of American culture and was able to watch her basketball inspiration, the Seattle Storm’s Sue Bird.

“I’ve always loved to watch her play. She’s just a rock star; like she’s 40 and she’s still killing it. Like, that’s crazy.” 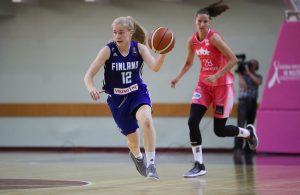 Korpinen finally had a chance to meet her inspiration at the 2018 WNBA Finals when EagleBank Arena hosted Game 3.

Korpinen’s one year abroad playing basketball turned into two, which then led to her making the decision to go to college in the U.S.

“It kind of all just happened, she said. “It was in the back of my head like that would be a really cool opportunity and I always wanted to play professionally.”

Korpinen made her decision to come to Mason on Nov. 6, 2016, with an intended major in kinesiology.

Head coach Nyla Milleson said that Korpinen’s work ethic is what makes her stand out. “From the minute she walked on campus — I mean, she’s the one that’s just going above and beyond. You’re never going to be very good if you’re a nine-to-five player. She certainly is not.”

Milleson continued, “Her willingness to do whatever it is going to take to be better and then with all of our players we’ve been recruiting, she just such a great person.”

Korpinen recorded her career-high 20 points against Davidson on Jan. 15. She shot 6-10 from the field, 4-7 from behind the arc and recorded 2 assists.

Korpinen talked about her performance, saying, “It was pretty cool, I never shoot that much. But in the last game, I was like ‘Oh god I got the ball,’ and then I was like ‘Oh, did we just score?’ And as I was running back, I was like ‘Did I just shoot that? Did it go in?’ I wasn’t even thinking about it, I was just so into the flow of the game.”

With just one full year left in her college career, Korpinen has only one wish, “to make the NCAA Tournament.”

While Korpinen may still be away from Finland, she calls the U.S. her home away from home. And in the great words of Korpinen herself, “Suomi 4 ever.”