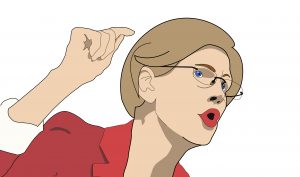 Electability. What is it? Who has it?

The word that appeared in almost every bit of news coverage of the 2016 presidential election has once again begun to dominate the national conversation surrounding the diverse field of Democratic candidates.

So who is electable? Many are quick to buy into the myth that men are inherently more electable, a seemingly logical conclusion based on the nation’s last 45 presidents.

However, on January’s debate stage in Iowa, Democratic hopeful Elizabeth Warren, surrounded by four men and just one other woman, decided to tackle the electability myth head-on.

Prompted by a question regarding a conversation she shared with fellow candidate Bernie Sanders in which he allegedly told her a woman could not be elected president, Warren delivered what would become one of the most memorable lines of the night.

“Look at the men on this stage,” Warren said. “Collectively, they have lost 10 elections. The only people on this stage who have won every single election that they’ve been in are the women: Amy [Klobuchar] and me.”

Warren’s statement was not only a winner with the audience and her supporters but is a poignant reminder of a lesser-known reality of the intersection between gender and politics.

A 2019 report by the Reflective Democracy Campaign (RDC) found that, after studying data from 2015, women of all races and men of color win elections at the same rate as white men, when they are on the ballot.

“When voters have the opportunity to vote for women of all races and men of color, they choose them at the same rates as white men,” the report states.

In 2018, non-incumbent women even won at a higher rate in House, Senate and state elections than non-incumbent men at both the primary and general level.

According to the RDC report, however, while women make up 51 percent f the population, they still make up less than one-quarter of Congress, and millions of women live in states where men hold over three-quarters of the legislative seats. Women of color, at 20 percent of the population, only hold four percent of elected offices.

So why are we not seeing better representation of women in office? Because the problem started long before then.

For years, political pundits and researchers have blamed the lack of female candidates on the ambition gap. Women have a vague idea that running for office would be more difficult for them than their male counterparts, making them less likely to even consider entering the race.

And taking one look at the treatment of Hillary Clinton in the 2016 election by her opponents and the media alone, it is understandable that women might want to avoid the political world.

But looking only at the ambition gap puts too narrow of a lens on the issue. And it puts the burden of fixing the issue disproportionately on women’s shoulders. Those who attribute the decision women face to internal factors run the risk of missing the societal barriers that shape those internal biases.

In a 2008 study that measured the political recruitment of men and women with similar levels of income, career status, political interest, age and education, researchers at the Brookings Institution found that women receive lower levels of encouragement and recruitment to launch their campaign.

Encouragement is lacking from political actors like party leaders, elected officials, donors and advocacy groups. These political establishments act as gatekeepers and have a huge say in candidate selection, who gets fundraising resources and who wins endorsements.

In 2014, the Institute for Women’s Policy Research conducted 60 interviews with female candidates, officeholders and congressional staff members. The researchers reported that 51 percent of those female candidates and elected officials indicated that they had never been encouraged by party leaders to run for higher office, and 71 percent said that they had never received encouragement from other power brokers.

A number of women interviewed for a 2017 paper from the Center for American Progress not only reported dealing with a lack of encouragement but faced subtle dissuasion from party officials, including being told not to “mount primary challenges to incumbents in their own party.”

There is also a party gap since Democrats have focused specifically on women candidates for longer than Republicans.

“On the left, groups have recognized that women often have more hurdles to overcome on the road to political office,” Kristen Soltis Anderson, a Republican pollster, said in an interview with the New York Times. “Democrats have, for decades, built infrastructure to support women candidates in overcoming those hurdles. Republicans have let the chips fall where they may.”

Personal wealth also plays a huge role in a woman’s decision to run. While organizations help female candidates fund their campaigns, the cost of having a political career can also keep women on both sides of the aisle off the ballot.

Pay for many state and local officials is dismal. Legislators in Texas earn $7,200 a year, plus a $190 per diem. Those in New Mexico do not earn a yearly salary at all.

These low salaries make it difficult for those without personal wealth or career flexibility and those who have caretaking responsibilities — mainly women — to run in state-level elections.

More efforts need to be made from both parties to get women’s names on the ballots. Because when women run, they win. Year after year women have disproved the electability myth as they gain more seats in local and national political offices.

In 2018, the increase in women candidates on the ballot meant more women in office in 2019. The number of women elected in local, state and federal offices has increased from 28 percent to 31 percent since 2015.

But it all starts with encouragement. Not compensation for a so-called lack of confidence, but an equal level of recruitment with male candidates to make political participation more tangible for women.