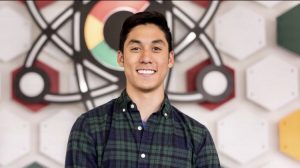 So, you’re in your last semester at Mason. What are your plans for when you leave?

How have some of your experiences in the tech industry influenced your life?

I think that has absolutely played a part, not just in the tech industry but my work experiences generally. But to answer your question, I think it’s opened my eyes to see the impact that the tech industry in general has. Not just from Google’s search engine or Disney as a streaming service, but to see how influential, nowadays, that every company has to be a tech company. Tesla’s an automotive company but they’re viewed as a tech company. So, I think that’s the major thing that I’ve learned from being in that industry. I’ve also learned that there’s extremely smart people across the board, and it’s a very competitive marketplace right now. So, there’s so many interesting things that you can learn and with that comes competition, so it’s all about positioning yourself to finding what it is you like and identifying what you don’t like as well. And that’s really opened my eyes as I’ve traversed throughout the tech industry.

You said that Mason creates an environment conducive to getting you into the professional workplace. What makes you think that?

Absolutely. I think that, off the top of my head, I would answer that by location. I think that Mason’s location is prime in that it gives you access to opportunities in the D.C. area but also in Tysons Corner or Reston. There’s a lot of corporate offices, both startup companies and smaller name companies like NEXCO, but also big brand-name companies, like we see Amazon coming here and establishing their second headquarters here, so I think that location is a major, major part. The second thing that I can think of is flexibility. I’ve seen a lot of Mason students work and go to school at the same time. I think that’s unique in comparison to many other colleges that you see where your academics are the main focus and I think at Mason, in conjunction with academics, you can work and pay for your tuition, and also gain those professional experiences. So, I think it’s a combination of the location and the flexibility and the convenience that Mason provides that has allowed its students to excel professionally and I think that opportunity — not everyone takes advantage of it — but those who do are the ones that are able to thrive on the job.

What was it like working with students from across the country?

Super cool. I think my first exposure was with J.P. Morgan, which is the bank in New York. Most of those kids were Ivy League kids, big brand-name schools and I think it was interesting to see, you know, that while it was extremely competitive, and you could definitely tell there was an edge to them that you don’t normally see when you walk around campus at Mason. I also had the sense that they weren’t more advanced than me and — for a lack of a better word — better than me because I felt like I was there, I could compete with them. Competitive in the sense that you get exposed to a lot of different students that you’re not exposed to on your day-to-day. The people that I interact with at Mason are different than the people I interact with at internships. So, that’s the one thing that I can pull apart, and even on my internships, I think it’s cool to see how everyone is going through the same thing even if it is, as I mentioned, competitive. It’s competitive for everyone regardless of if you go to George Mason University or MIT or Harvard. The goal is to get into a company like Disney or Google. It’s just as competitive for them as it is for us. While there is a competitive aspect to it, I think that there is a shared sense of understanding … It opened my eyes because you can really get trapped in a bubble if you just focus on your university or your state. Having that opportunity to go and see other students and see their different backgrounds was definitely eye-opening for me, and it gave me a different perspective on how to approach school, but also how to approach work.

What was the most enjoyable work experience that you’ve had during your undergraduate career?

My most enjoyable venture would absolutely be NEXCO-West USA. As I mentioned before, the start-up feel to it. There were only about 20 people that worked at NEXCO and coming in as an intern, I was given that opportunity to make an impact right away and I know a lot of people say that. But I think that it was really practice at NEXCO. I had the opportunity to travel for them. I went to San Francisco, I’ve gone to Indianapolis, New York, D.C. and I presented at conferences and that has made me who I am now, in terms of how to be able to articulate and how to present and how to speak, how to work. So, I think that it has been the most memorable and the most fun because it allowed me to learn so much and it put me in environments that were difficult, that many kids my age wouldn’t be put in. Contrary to something like a Disney, while Disney was awesome and I’m working on a great product, or Google where it’s a great company, I think the impact that I had was far less than what I really executed at NEXCO. So, I think that by far NEXCO is the highlight of my undergraduate career, and I think that’s attributed to the freedom I had and the impact that I was able to make.

If you had three bullet points to tell yourself as a first semester freshman, what would they be?

Keep an open mind. Accept all the opportunities that come your way no matter what. Everything is a learning experience and that may be cliche, but accept it. I also think that if I were a first semester freshman … Man, I feel like it was not too long ago so it’s hard to say I would give myself advice because I feel like I’m not too far removed from it. Just trust in yourself, like trust your gut that you’re going to end up getting to where you want … I know, me personally, I would regret making a decision because someone else told me to make that decision far more than if I made that decision and I had to live with those consequences. I would say trust your gut and follow your intuition over anyone else’s. Lastly, care about your mental health. Approach your life, both professionally but also academically, in a healthy manner and don’t be too difficult on yourself. I think that’s another piece of advice that I’d give. I think that was one of my biggest regrets in undergrad is I was extremely hard on myself and I did a lot of things that maybe weren’t very healthy for me. So, I would say try and have a balance in terms of the stress and the work, but also how am I relieving that stress and dealing with mental anxiety or issues or things like that. So balancing those.