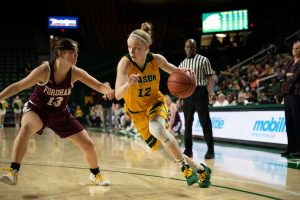 Head coach Nyla Milleson opened up the press conference by saying, “Fordham’s a very physical, very disciplined basketball team. We knew that coming in. And in order to be able to have a chance against them you’ve got to match their toughness and their physicality, and I thought there were spots in the game we did. But you know [in the] first half, when you shoot 19 percent, you’re not going to be in many ballgames.”

If the team continues to fail to get offensive rebounds, they will continue to give their opponent more chances to score.

Despite performing just slightly below the team’s average in offensive rebounding, they had just three second-chance points. Second-chance points have been key to putting points on the board in previous games.

Having more than three second-chance points will be necessary for the Patriots to add more wins to their resume.

The Patriots made just 19.2 percent of their shots in the first half. This equates to five field goals, though four of those were three-pointers. Mason went into halftime down by nine.

The team’s shooting improved in the third quarter when they shot 41.2 percent and scored more points (17) than they did in the first half (16).

Overall, Mason shot 31.5 percent from the floor, while Fordham made 41.8 percent of their shots.

If the team is going to win games, they will need to make more of their shots.

Nicole Cardaño-Hillary needs to be on for four quarters

Nicole Cardaño-Hillary averages 17.5 points a game for the Patriots, but she had just two points in the first half.

As the reigning A-10 Player of the Year, the team often turns to her as a spark. However, it took until the second half for Cardaño-Hillary to get going.

While the team cannot rely on her to carry them, she will need to score more than two points in the first half of upcoming games to provide a spark to get the rest of her team going.

Despite starting conference play 1-4, Milleson said, “There’s not an ounce of quit in this team.” The team will have a chance to prove that once again Wednesday evening in Pittsburgh against Duquesne.

The Patriots return home on Jan. 25 when they take on VCU at 2 p.m.