This week, for our final issue of the semester, we take a look at two Fourth Estate editors that will be leaving the newsroom, Opinion Editor Chris Kernan-Schmidt and News Editor Abigail Adcox 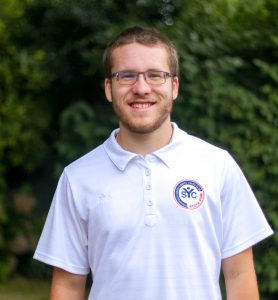 So, next semester, I’m really getting down to studying a lot. I’m trying to finish my degree, working on a lot of Russian language classes. I’ll be continuing my role in Student Government as the chief of staff, which is a large leadership role that takes a lot of time. Also, I’ll be working outside — the reason I’ll be leaving. I just got a new job as a high school track coach. So, I’ll be doing that every day. So, keeping busy.

HOW DID THE COACHING OPPORTUNITY COME ABOUT?

I’ve been a youth track coach for about five years now. So, I run a three-season program, so: cross country, indoor track and outdoor track — head coach and director for all of that. And so, when I ran in high school, my mentor [was] the head coach of that program. And so, I kind of wanted to get more involved with that sport. So I just asked, ‘Hey, can I participate? Can I be a coach? I’m certified, I have the experience,’ and you know they were kind of gracious enough to let me on and pay me for it, too.

WHAT ARE YOU GOING TO MISS THE MOST ABOUT STUDENT MEDIA?

I really enjoyed the people. Working with the people and having a group around me on Fridays who, you know, everyone’s joking, everyone’s having fun and it’s a really supportive group. [If] something goes wrong or someone misses a deadline, everyone kind of comes together and makes things work. And it’s a cohesive team, which you don’t find very often.

WHY DO YOU THINK THAT STUDENT MEDIA IS IMPORTANT?

As Opinion Editor, I’ve always believed that everyone should have a voice. That includes students as a whole, that includes individual students and their individual opinions. And having a student-run media outlet, whether it’s the literary journals or something like [Fourth Estate], it just allows students to express themselves outside of class and to a wider audience that they wouldn’t be able to have a chance to do otherwise.

WHAT DO YOU THINK IS THE MOST IMPORTANT THING THAT YOU’VE WORKED ON SO FAR?

Through the Opinion section, anyone can submit their opinion. As long as it’s well written, logical and reasonable, I like to publish it. And, for me, that is super important because Mason is a very diverse school, but often within our own circles of friends or organizations we typically only hear one voice or one side of the story, whether it’s political, cultural or otherwise. And so to be able to open up the newspaper and read opinions that are different from yours and, perhaps, learn something or challenge your own ideas, that is immensely important to me.

WHAT’S YOUR MOST MEMORABLE MOMENT?

I think the most memorable moment, not exactly about Student Media, but kind of in my role you know as Opinion Editor, I get a wide range of submissions. Like I said, some of them good, some of them not so good, some of them completely random. Someone sent me two works of fiction that read like a fever dream about Christmas and it wasn’t from a student, it was from a man in London. How they found my email, I don’t know. That to me, I’ll tell that story like, ‘Yeah, that was my experience as Opinion Editor.’ 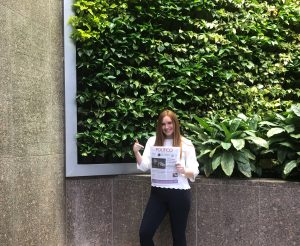 I am studying abroad in Paris, France at [The Paris Institute of Political Studies]. I’m going to take some government classes and, hopefully, some journalism classes. But mostly, I just wanted to immerse myself in a different culture and just kind of get some different opportunities that I wouldn’t get at Mason. Especially to travel around Europe and see a lot of different places that I haven’t been able to yet visit.

ANY REASON YOU PICKED FRANCE SPECIFICALLY?

I’ve studied French for about four years now. I did it for a couple of years in high school and three semesters in college now. So, I’ve done a lot of studying of the French language and I also have kind of a funny story actually. On my wall at my house, I have a big mural of the French, Parisian scene. Because when I was in fifth grade, I was obsessed with Paris, and then [in] sixth grade I actually visited Paris for my first and only time. But, I was just super obsessed with [Paris] around that time, so it’s kind of funny that I’m going to end up studying abroad there.

WHAT DO YOU THINK YOU’LL MISS THE MOST ABOUT STUDENT MEDIA?

I think I’ll miss just hanging out, [and] the friendships and things that I’ve made here. Some of the opportunities, especially the clips and the professional opportunities, but also just the environment. And I’ll miss everyone.

WHAT WAS IT LIKE TO WORK WITH THE SOCIETY OF PROFESSIONAL JOURNALISTS (SPJ) AND FOURTH ESTATE DURING THE SEMESTER?

I definitely think it was beneficial and they go hand-in-hand. Last night, [Thursday, Nov. 14], we went to a professional journalism event … they kind of go hand in hand. I’m getting my clips and all my professional writing experience with Fourth Estate, but I’m getting my networking experience with SPJ … Both of those are really important aspects of getting a job or an internship.

WHAT DO YOU HOPE TO GAIN FROM STUDYING ABROAD?

I really just want to just kind of throw myself into a completely different culture, and just kind of go with the flow. I’ve never been that spontaneous … I just have no idea what I’m going to expect over there, but I think it will probably be one of the best semesters of my college career, just because it’ll be so different and I know there are so many different opportunities over there. Hopefully, I’ll be able to write for one of their newspapers.

WHAT DO YOU HAVE TO TELL THE NEXT NEWS EDITOR?

I think that one thing that I think that you always can improve, especially I could of improved upon, is communication with my writers. I did feel like I did a good job recruiting more writers, but it’s very hard to keep writers throughout the semester. So, I think just communicating with them, providing them with valuable feedback, but also not being too harsh because you want them to come back and write for you. And then just always be open to their ideas, and maybe even texting them to see if they have ideas. I always ask people for ideas, but they don’t really come to me with ideas. So maybe just approaching them and being like, ‘Hey, do you have any cool ideas?’ and they might actually have something if you text them.