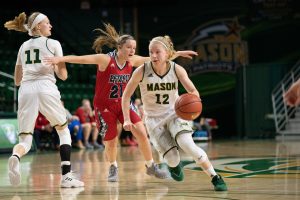 Mason improved to 2-1 Saturday afternoon with a 75-62 win over Detroit Mercy.

“[It was a] good three quarters for our basketball team,” said head coach Nyla Milleson.

“Fortunately, we came out with a win because it’s a full 40 minute game, but I thought we played a great first quarter, and I thought we played a very, very solid unorthodox lineup in the second half. But that’s just going to be the key with this team, just to make sure that we continue to put 40 minutes together,” she continued.

Versatility is critical for success

The unorthodox lineup Milleson mentioned in her opening statement was five guards, something not often seen, especially when the opposing team has a center that is 6 feet, 5 inches.

Jacy Bolton stated, “I think it’s great, the versatility that we have, but just having so many people that can score the ball on every night it makes it really hard to guard.”

Sarah Kaminski added, “I definitely think we do a good job recognizing who’s got it, and then Nikki [Cardaño-Hillary] had a couple threes in a row and so we called … a couple plays for her.”

This unusual lineup worked for the Patriots and they were able to outscore the Titans 45-29 in the second half.

Sarah Kaminski is irreplaceable for the Patriots

The senior had three three-pointers in the first quarter, and moved into fourth place all-time in made threes.

Milleson commented on the achievement, saying, “[She’s] just such an unselfish player and, and it’s sincere when she said all she really cares about is this team winning, but she’s had a pretty good career and she’s not done yet.”

“I guess [when] you battle in the post you get more rebounds,” said Kaminski.

Kaminski is listed at 5 feet, 9 inches and typically would not be asked to guard against a post player.

Milleson commended her defensive effort saying, “Sarah at 5-foot-11 with her high heels on was guarding 6-foot-5.”

After being outscored 24-10 in the second quarter, the upperclassmen stepped up in the final two quarters.

When asked about what this said about her team, Milleson said, “I think it says a lot about our senior leadership. We put three seniors on the floor to start the second half … They definitely took what was said at halftime and came out and made sure that we took care of business.”

Gatling, who did not start the second half, provided a critical eight points for her team in the final ten minutes of play.

“We need her to be successful in order for us to be successful, and you know, I thought the first and foremost are coming back on the floor after having not got the start the second half and not have played,” said Milleson.

She continued, ”I thought [it] showed some great maturity on her part. But our biggest key with Cam [Gatling] is we got to get her going a little bit earlier. And so she doesn’t sit, because she’s capable of doing that.”

Mason wraps up their homestand on Nov. 21 at 7 p.m. when the team takes on American.