After a disappointing 6-7 nonconference record last season, the Mason Patriots will look to start the 2019-2020 season on a much higher note.

There are a handful of dates that Mason fans should circle on their calendars, but perhaps the biggest circle should go on Nov. 22, as the Patriots will take a bus ride up to College Park, Maryland., to take on the Terrapins.

Maryland is ranked seventh in the preseason Associated Press Poll and 16th by college basketball statistician Ken Pomeroy. The Terps have made the NCAA Tournament in four of the last five seasons and have been seeded as high as fourth. Last season, as a six seed, they fell in the Round of 32 to LSU.

The only other team on Mason’s nonconference schedule that has an inside track to an NCAA Tournament bid are the TCU Horned Frogs. The Patriots will travel down to Fort Worth, Texas, on Dec. 30 for a game that will conclude nonconference play for both teams.

When watching the game, Patriot fans might see a familiar face on the TCU side of the Schollmaier Arena. Former Mason starter Jaire Grayer joined TCU this season as a graduate transfer after spending the past four years in the green and gold.

The Patriots will begin the tournament by playing Old Dominion on Nov. 25 and will face either Nebraska or Washington State the following day. Mason will play again on Nov. 27, concluding three days of basketball in George Town.

Of course, a Mason basketball schedule is not complete without a faceoff against James Madison University (JMU). The Dukes will return to EagleBank Arena on Nov. 16 after taking a 66-53 loss in the same building last season. 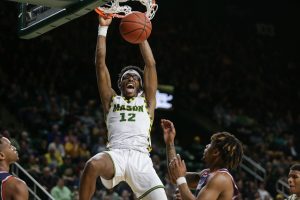 Shortly after students have wrapped up final exams for the fall semester, Mason will welcome the UMBC Retrievers to EagleBank Arena on Dec. 21. UMBC shocked the college basketball world in 2018, becoming the first No. 16 seed to defeat a No. 1 seed in NCAA Men’s Tournament history.

But before any of these games tip-off, Mason will host Navy on Tuesday, Nov. 5, to start the 2019-2020 season. The Patriots defeated the Midshipmen last season, 84-63.

The Patriots will open the season with five consecutive home games before their clash against Maryland. Eight of Mason’s thirteen nonconference games will take place in Fairfax.

For a team that lost Otis Livingston II as a graduating senior last year, Ian Boyd, who is out for the season with a wrist injury, and Justin Kier for the start of the season, the home games early on will serve as critical building blocks before the competition increases later in the month and into December.