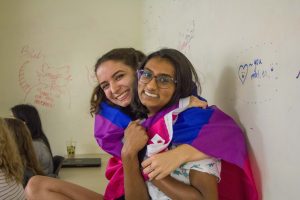 Shining a light on bisexuals in the LGBTQ+ Community

This event was hosted by Pride Alliance’s president Elijah Nichols. Nichols wanted to create a space to celebrate bisexuality.

He continued, “But notice that bisexual is beautiful, and it’s real, and it’s valid, and it’s there. So, I came to support all my bisexual brothers and sisters.”

Freshman information technology major Manasi Mudumbai decided to come to karaoke night because she loves to sing and is proud to be bisexual.

Mudumbai said, “I feel like sitting down and thinking and talking to yourself through how you feel is really important. And I think a lot of people should start doing that so that they’re more in touch with their feelings.”

Bisexual people are often stigmatized for being attracted to both genders. The idea that being bisexual is a phase affects people dealing with their sexuality, especially at a young age. Mudumbai continued, “I find that it is kind of painful and hurtful because sexuality is a spectrum to me. And I feel like we should be accepting of all ranges of the spectrum.”

Students came to the event to find community, as well as to have a good time.

Freshman government and international politics major Anna Antonio-Vila said, “There’s not many events specifically made for people who are bisexual. And I’m also becoming more comfortable with my sexuality.”

She continued, “I think that it’s great to have events that are all-inclusive for everyone in the LGTBQ+ community. I feel like it’s kind of sad to see not much bisexual representation. But I’m glad this night exists.”

At the event, Antonio-Vila sang “Girls Like Girls,” by Hayley Kayiko. “It was one of the first songs I listened to when I was getting more comfortable with my sexuality,” she said.