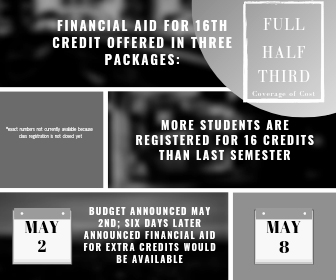 Nelly Solares did not receive any aid from Mason when the credit cap changed from 16 to 15 credits. The sophomore music education student is not sure why. Her parents have tried to help her pay for school, but her father can no longer work because of a disability. Her mother has also planned to retire after a recent accident.

With that, every scholarship and every grant Solares applies for feels incredibly vital to her.

“Thinking about this change and how it affects both me and my parents puts a huge weight on my chest,” she wrote in a message to Fourth Estate.

On May 8, 2019, less than a week after the Board of Visitors passed tuition and credit changes for the following school year, students received an email from Student Academic Affairs. It stated that aid would be provided to students the following semester to help with the credit cap change from 16 to 15 credits. A few notes were included stating that  students would not be considered for funding after June 1 and that funds would first be allocated to students who have documented financial need.

“This is a big change for students who have been here and have become accustomed to one way of how tuition is charged,” Vice President for Student Enrollment David Burge said. “This has been something that’s been discussed for a while, but never actually acted upon.” He continued that this was a better year than most to start this policy, with Mason’s overall tuition staying frozen.

The total amount that the Financial Aid Office allocated to cover a 16th credit this year is $2.7 million. This comes in three forms: the 16th credit being fully covered, half covered or one third covered. He believes that the office will give out less than the $1.35 million in aid they had planned this fall.

Burge did not have an exact figure for how much his office is giving out during the semester. He cited the ever-changing nature of registration and schedule changes as a reason why.

“If they drop below 16, then that aid comes off,” Burge said. “But if they then jump back above 16 because of a change in when they registered for the classes, then the aid automatically comes back on.”

The main way that the office determines who receives what aid for the additional credit is through the Estimated Family Contribution, which comes from the Free Application for Federal Student Aid (FAFSA). They saw who had registered for 16 credit hours by June 1 and then looked at how much aid they could provide “just to see how far down we could go, in terms of how deep the need levels went.”

At this time, Burge stated there are more students signed up for 16 credits currently than students who were signed up for the same amount last year. He also said that could still change, as there is no penalty for dropping a class until Sept. 9.

Some students actively avoided taking more than 16 credits. Cassidy Pollard, a junior integrative studies major, was one of them.

“This semester actually ended up such that I only needed to take 15 credits,” Pollard said. “I definitely made a significant effort to create a schedule under 16 credits in order to avoid paying extra per credit via the new calculation.”

Even if a student tries to avoid taking more than 15 credits, it can be difficult for those who have to take a heavy course load in order to graduate on time or stay on track.

Junior English major Ethan Reynolds took a language course that caused the number of credits he is taking this semester to increase from 12 to 18. When he checked his PatriotWeb, no signs of refund for the 16th credit could be found. “It could help a lot, as I and my family need all the financial assistance we can get,” he said.

In the future, the Office of Financial Aid plans on continuing to give aid for the 16th credit. Burge stated it would be affected by the Commonwealth of Virginia and how much need-based assistance they provide, as well as the budget process. It will not be fully determined until the end of next semester, between March and May.

“Right now, I see no reason why that would change,” Burge said. “Once we have all of the information together, we can make a better decision, again guided by the idea we would like to provide as much as we can to as many as we can.”

Seven Years: The Era of Cabrera