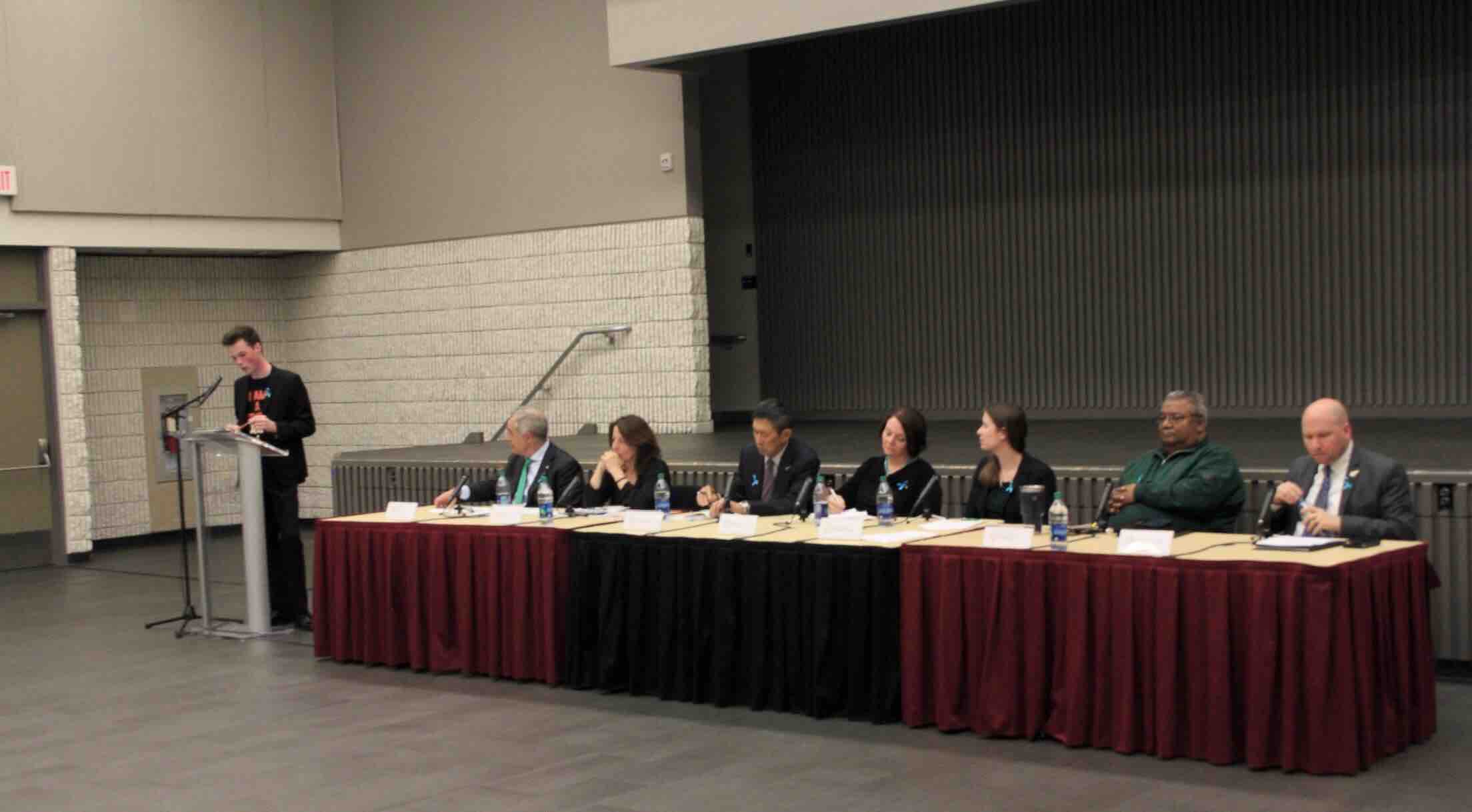 On Tuesday, April 16, Mason for Survivors hosted a town hall to address student’s concerns with sexual assault issues, in conjunction with Student Government and other offices on campus.

“What are some ways you guys will work to reduce the workload of the few staff that work in the Title IX office, and when will these changes take place? William & Mary has five officers, even though their students population is less than one-fifth the size of George Mason’s,” freshman government and international politics major Elijah Nichols asked.

However, this question was not written by him, just as much as the answer was not solely for him. Nichols was the host, speaking for students who had submitted questions online and wanted answers.

It was the first query made on a night aimed at increasing transparency between Mason and its community, as well as decreasing the concerns about the response to sexual violence at Mason.

The event was formed in response to new student-activist group Mason For Survivor’s second published demand, that Mason will “hold a Town Hall to discuss [Supreme Court Justice] Kavanaugh’s hiring and implications for students and the university including a public comment section.”

From 6 p.m. to 8 p.m., a panel of administrators came together and heard student concerns about their safety on campus and personal stories from students meant to show exactly what is at stake.

Members of the panel included President Ángel Cabrera, Provost S. David Wu, Vice President for University Life Rose Pascarell, Mason’s law school’s Senior Assistant Dean Alison Price, Interim Title IX Coordinator Elizabeth Woodley, Chief of Police Carl Rowan and Chief Housing Officer Dr. Chris Holland. As well as listening to students, all were there to shed light both on what had been happening behind the scenes in the hiring of Kavanaugh and what they planned to do moving forward.

Before the event began, it was made clear that this was a space where all members of the community could share their feelings and stories without feeling attacked or judged.

“There is a level of civility and respect that we need to keep in this room, not only for survivors, but for the panelists, the people in this room, we just want to share that there is a sense of safety and security in this room,” Nichols said. “Don’t feel like you have to censor yourself. This is a moment to speak directly to [the] university administration, as well as ensure that your voice is heard as a student [and] as a community member.”

Students in the audience shared many different feelings. One potential Patriot questioned whether she should attend the school following the announcement of Kavanaugh attending, while current students asked about safety mechanisms that could be put in place around campus.

One student, psychology major David Hamlette, asked the panelists how many had children. All but one raised their hands. He then asked, “If any of this happened to any of your children, would you guys truthfully feel … comfortable having someone who has allegations like this in this close proximity with your children?” 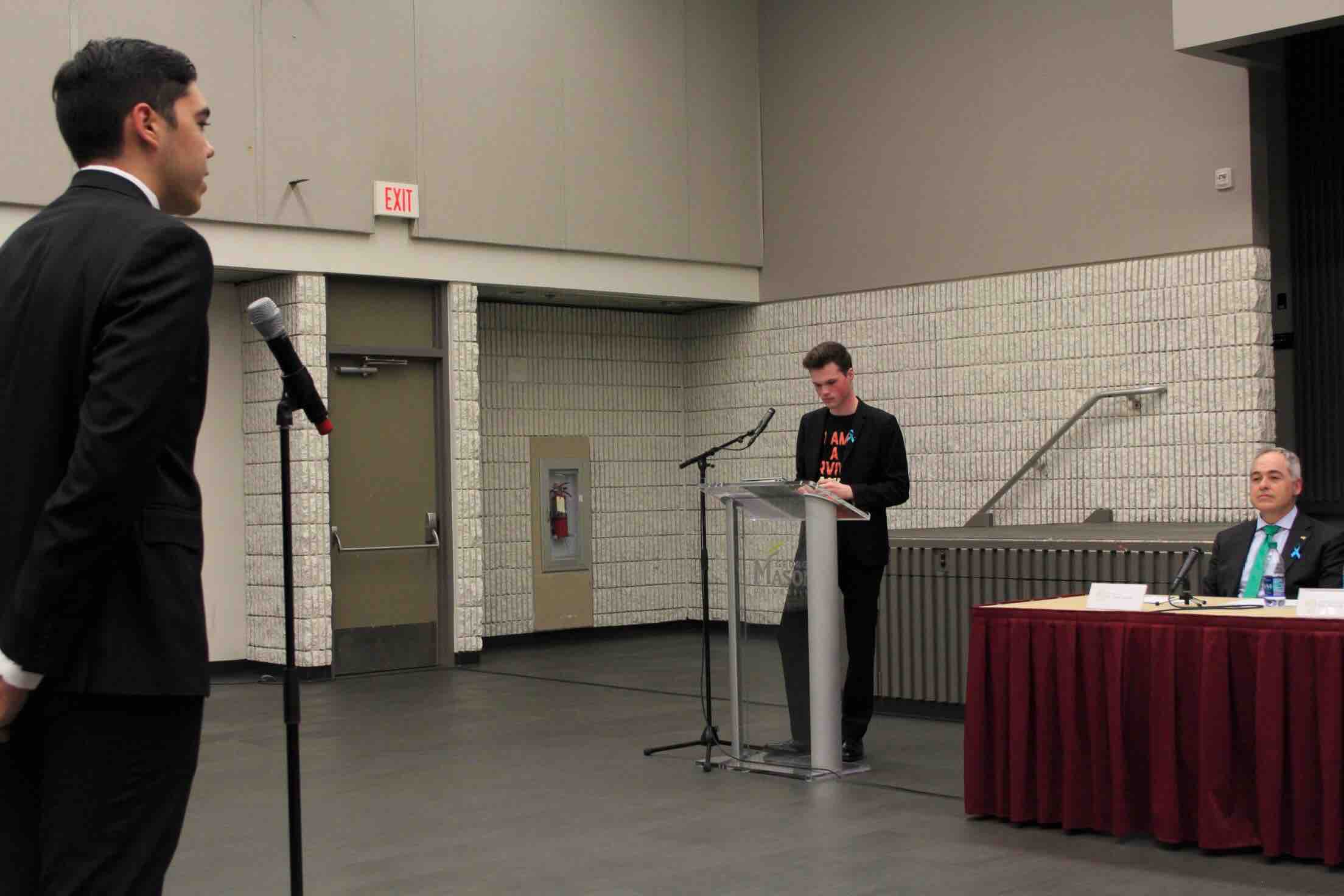 Price was the only panel member who raised her hand without hesitation.

Pascarell explained that it would depend on “other signs than this one moment” at any school her child was thinking of attending for her to make that decision.

Price had been questioned earlier in the night by sophomore Student Senator Monet Ballard. Ballard asked Price how students were supposed to believe that Mason stands with survivors when organizations that have donated to Mason and the law school, such as the National Rifle Association and the Federalist Society, adamantly fought for Kavanaugh’s appointment.

Price responded, “I suspect, but I can’t say for sure, that you have donors on both sides of many issues, including these issues. And … there are law students who are sexual assault survivors who are not opposed to the law school offering class with Justice Kavanaugh.” She went on to state that the law school is going to offer more services for survivors with their own funds, that they had been asking for more money for a long time and they were trying to support everyone.

Both Price and the rest of the panel gave no indication that Kavanaugh would be removed from his position with the school, nor the study-abroad class he is currently scheduled to teach in England this summer.

When asked by Student Government member Sean Diment how the hiring of Kavanaugh would affect survivors, Wu said, “I’m sure the law school faculty, when they made this decision … they have many of the context of the background ahead of them, and they have made their collective judgement based on the information that is available to them. And once they made that decision, unless they are in direct violation of university policy or … [there are] legal reasons, there is no reason for the university administration to override a decision of that nature.”

In response, Diment said that he hoped greater consideration would be given in the future.

Students also raised questions about both Peter Pober, the former Forensics coach at Mason who has been accused of sexual assault―and was charged with four felony counts of embezzlement by the university before they were dropped―and the student who apparently recorded women on his phone in Innovation Hall’s fourth-floor bathroom.

“This was a tactical issue under the prosecutor’s office,” Rowan said when asked who chose to drop the charges Pober faced. “What I can tell you is nothing is over, and it was strictly a tactical issue involving speedy trial issues. But everything will be back.”

“It is not against the law in Virginia to actually walk into a bathroom and film,” he said. “It’s only if you are capturing private parts and that sort of thing that it becomes criminal. You might get punched in the nose, but it’s not criminal, and it’s certainly a Student Conduct issue.”

Both Rowan and Pascarell stressed that, though the results of the investigation could not be discussed publicly, the student was referred to the Office of Student Conduct, where they dealt with it accordingly. Rowan also mentioned that the incident lasted a short amount of time and that, if he could discuss the issue, “You would be a lot less concerned about it than you are now or may have been after a media story kind of blew it out of proportion.”

After the town hall, Nichols said that it was imperative that Student Government continues to provide resources for students. Recently, a resolution for action to be taken against perpetrators of sexual violence and for more resources was passed, including survivors being able to move housing if needed and having access to rape kits and free STI testing.