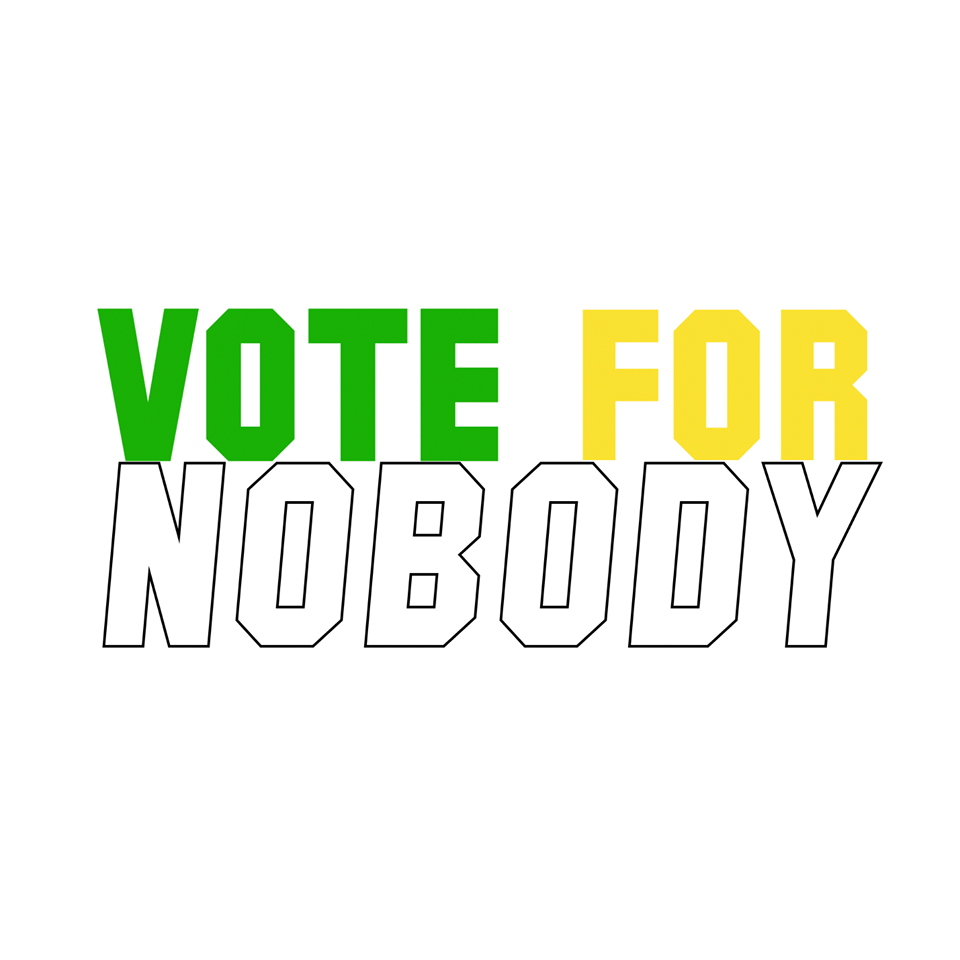 Photo courtesy of Vote For Nobody

BY MICAH MUDLAFF, REPRESENTATIVE OF THE “ABSTAIN FROM VOTING” CAMPAIGN

This campaign is a referendum on Student Government. We’re asking you to select “Abstain from Voting” on your ballot for student body president.

Micah Mudlaff, Representative of the “Abstain from Voting” campaign.

Why should you take the time to log in to GetConnected, pull up a ballot and select “Abstain from Voting” for student body president? Because the concerns of students are not  represented at Mason.

As it stands now, Student Government does little to serve the student body. Ask yourself, what diﬀerence has Student Government made in your life? Can you name one positive change on campus? What about two? To empower students’ voices, we must reject the status quo. The best way to send a message to the administration that we are tired of being patronized, ignored and neglected is to select “Abstain from Voting” in the student body presidential election.

Some will argue that Student Government does in fact represent their interests, but we completely disagree. Consider two years ago, when the student senate voted to spend $2,000  on iClickers intended to be used by student senators to vote electronically, instead of using their voice. I do not believe this purchase was in the best interest of the students, but to make matters worse, after the purchase was made those devices were never used. To this day, the iClickers are sitting in a box somewhere in Student Involvement.

Do you still feel represented?

Consider last fall when student government tried to change “Columbus Day” to “Indigenous People’s Day” on the Mason calendar. The student body overwhelmingly approved the change in a poll that Student Government sent out, yet the administration put up every hurdle and roadblock they could come up with to keep us from making that change.

Davide and I have between us five years of experience within Student Government. Davide was a student senator for three years, and held the roles of vice chair and chair of the government and community relations committee in the senate before he became speaker of the student senate this past fall. I was a student senator and was appointed the senate military liaison, before I joined the executive branch for a year as the Undersecretary for Student Well-Being and Safety.

Both of us are no longer in Student Government, but like so many former Student Government members who are supporting our Vote for Nobody campaign, we felt it was absolutely necessary to campaign on real, structural change this election and to try and convince you all that rejecting the current system that ignores and degrades students by selecting “Abstain from Voting” is the best way for us all to have a chance at real representation at GMU. Take it from us—our Student Government system is broken, and it needs real change now.

Some current members have Student Government have iterated to me that they feel disparaged by the campaign, and that they find #VoteForNobody oﬀensive. They should be oﬀended, but not because of me. They should be oﬀended by the way the administration ignores their work and eﬀort. If anything, Davide and I are the best chance they have of actually being heard by the administration, as long as we make a large enough impact to be noticed.

That is why it’s so important for all of you to support the #VoteForNobody campaign. When the ballot is released, there will be two options available: my opponent and “Abstain from Voting.” If enough people decide enough is enough and select “Abstain from Voting,” the administration will notice. They will notice that students took the time to log in to to GetConnected to vote against a conventional candidate. You will still be making your voice heard, but you will be doing so in a way that rejects the way Student Government operates now.

If you are content with no representation, continue to support the status quo. But if you want a chance to change Mason, this is the one shot you have to actually make a diﬀerence. Select “Abstain from Voting” on your ballot for Student Body President to show the administration you’re tired of being ignored and that you want a real voice at the table.

View all posts by Micah Mudlaff →